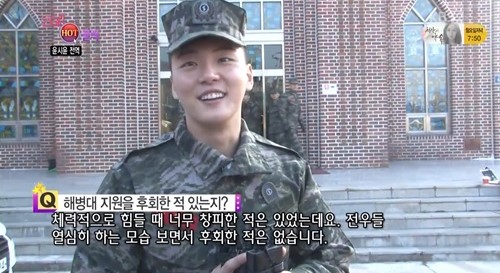 The actor willingly joined the Marines on April 28, 2014. Recently, he was discharged after 2-year of enlistment.

When asked if he felt regretful about applying to the Marines, Yoon admitted: “It was embarrassing at times when I had a hard time physically.” However, he asserted that he indeed did not regret when seeing his army comrades work hard.

As a mature man now, the star mentioned his future plans:

Although I want to be active as soon as possible, I think I need to be prepared. If I get greedy and rush into it afer a two-year hiatus, I think I may disappoint. I will work hard and show that I′ve become a man.