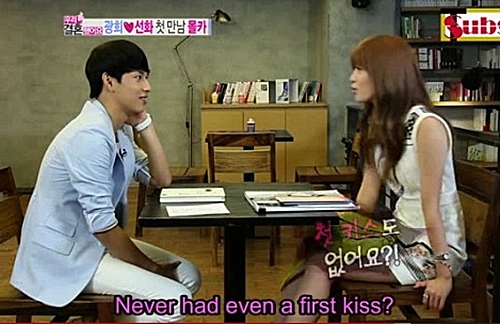 ZE:A’s Kwang Hee and Secret’s Han Seon Hwa are newlyweds on ‘We Got Married’ 4

The fourth season of MBC TV‘s We Got Married has officially started and the show’s latest additions of newlyweds have been introduced.

ZE:A‘s Kwang Hee and Secret‘s Han Seon Hwa were declared as a wedded couple on the September 1 episode of We Got Married. Although their marriage is still fresh, the two had a small quarrel regarding Kwang Hee and band member Siwan‘s prank involving a hidden camera. Viewers are anticipating the upcoming episodes to see how their relationship will turn out.

AGB Nielsen Media Research recently announced that the episode of the show featuring Kwang Hee and Han Seon Hwa received a viewing audience of 6.6% which exceeded the results of the August 25 episode by 0.8%.

Hellokpop, as an independent Korean entertainment news website (without influence from any agency or corporation), we need your support! If you have enjoyed our work, consider to support us with a one-time or recurring donation from as low as US$5 to keep our site going! Donate securely below via Stripe, Paypal, Apple Pay or Google Wallet.
FacebookTwitter
SubscribeGoogleWhatsappPinterestDiggRedditStumbleuponVkWeiboPocketTumblrMailMeneameOdnoklassniki
Related ItemsAGB Nielsen Media ResearchHan Seon HwaKwang HeeMBC TVseason 4SecretWe Got MarriedZE:A
← Previous Story BIG BANG’s Seungri to appear in the special edition Kindaichi Boy’s Accident Files movie
Next Story → INFINITE’s to sing OST for ‘Just What is Mom’ + L confirmed role for sitcom