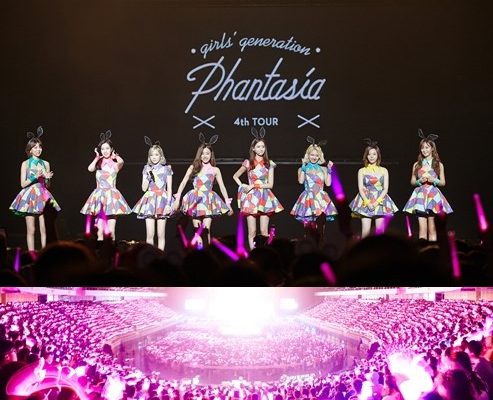 Girls’ Generation Had A Blast In Taiwan With 20,000 Fans

Girls’ Generation had a wonderful weekend with Taiwanese fans!

The tour titled Girls’ Generation 4th Tour – Phantasia – in Taipei took places on May 7 and May 8 at the Taiwan Taipei Arena. It drew a turnout of 20,000 fans and various mainstream media.

During the tour, the girls performed 24 songs in total, including their hit tracks; Into the new world, Genie, The Boys, Mr.Mr, plus new songs from their 5th album, namely Show Girls, Fire Alarm and Bump it.

In addition, sub-unit TTS also satisfied fans with its performance on Adrenaline. Yoona and Sunny showed off their voice through the track Sugar, while Sooyoung, Hyo Yeon, and Yuri heated up the stage by performing Push it.

Taiwan fans welcomed their idol on May 7 and May 8, with the respective messages on cards; “Thank you for being our strength” and “We will forever be your fans.”

Furthermore, fans even made special cards that said, “Yoong brace the Sun shine”, referring to the two members Yoona and Sunny, whose birthdays fall on May.

In closing of the concert, SM Entertainment commented positively, “We are excited to see that 20,000 fans attended the 4th Taiwan concert. We once again saw the global influence of the number 1 Girls’ Generation.”