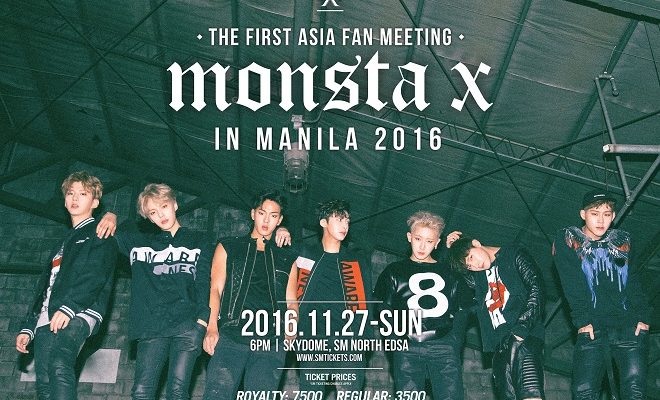 PULP Live World brings another first as it announces that ‘Monsta X In Manila 2016: The First Asia Fan Meeting’ is set to be held this November 27, 2016 at Skydome, SM North EDSA, Quezon City.

Not only can Pinoy Monbebes (the term for Monsta X fans) get to see Shownu, Wonho, Monhyuk, Kihyun, Hyungwon, Jooheon, and I.M. perform their brand of K-pop hip-hop and R&B in the flesh for the very first time in the Philippines, they also get the chance to have an interactive fan experience with the Korean boy group as well!

It will truly be a first and one-of-a-kind experience in the Manila concert circuit. It promises to be a spectacular night as the boy group brings their electrifying dance moves, and versatile singing, rapping prowess in hits such as Stuck, All in, Hero, Trespass and Rush.

The group was formed by Starship Entertainment through the MNET talent survival TV show ‘No Mercy’ in 2015.

Monsta X may have been formed less than two years ago, but the boys have already broken records, and amassed a large fan base worldwide in such a short span of time. Their 2nd mini-album Rush (after Trespass) placed #1 at the Hanteo Chart. They also received the ‘Next Generation Asian Artist Award’ on the ‘2015 MNET Asian Music Awards’.

Monsta X’s third mini-album ‘The Clan Part 1: Lost’ was released on May 2016, and skyrocketed to #5 on the Billboard World Charts. Monsta X surpassed 1 million views on YouTube in a span of only 24 hours, topped the Hanteo Charts in Korea, including US and Japanese iTunes’s K-Pop Charts.

When asked by magazine Bling what their ultimate aspiration for the group is, Kihyun said:

We want to be a group who does music they like and gets love. And also, we want to make music together for a long time. (Translated from Korean via Tumblr).

Be part of an exciting first in Philippine concert history with ‘Monsta X In Manila 2016: The First Asia Fan Meeting’ presented by PULP Live World.

Ticketing will begin from September 18 at all SM Tickets branches nationwide and online at smtickets.com.

For PULP Royalty inquiries that offer special and exclusive fan privileges, readers can email directly to [email protected] or contact the PULP Royalty hotline at 727-4957.

We need your support! If you have enjoyed our work, consider to support us with a one-time or recurring donation from as low as US$1 to keep our site going! Donate securely below via Stripe, Paypal, Apple Pay or Google Wallet.
353
SHARES
FacebookTwitter
SubscribeGoogleWhatsappPinterestDiggRedditStumbleuponVkWeiboPocketTumblrMailMeneameOdnoklassniki
Related ItemshyungwonI.MjooheonkihyunMonbebesMonhyukmonsta xMonsta X First Asia Fan Meeting in Manila 2016PhilippinesPulp Live Worldshownuwonho
← Previous Story Lee Hi To Hold Showcase On Her Birthday In The Philippines
Next Story → BTS To Meet Japanese ARMY!