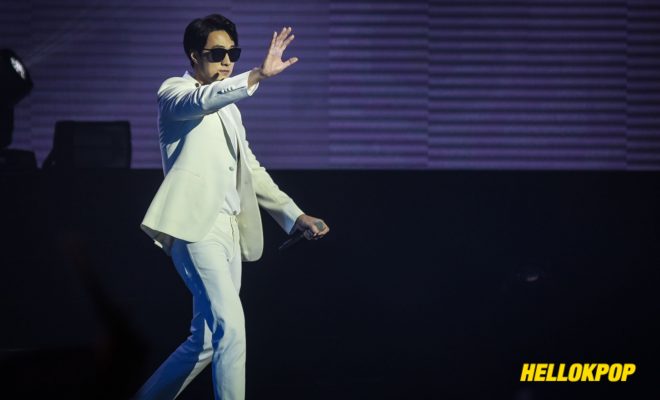 Swag and classy! Befitting of his top star status, So Ji Sub threw in a lavish party for his Philippine fans who were excited to meet him up close for the first time on March 16. 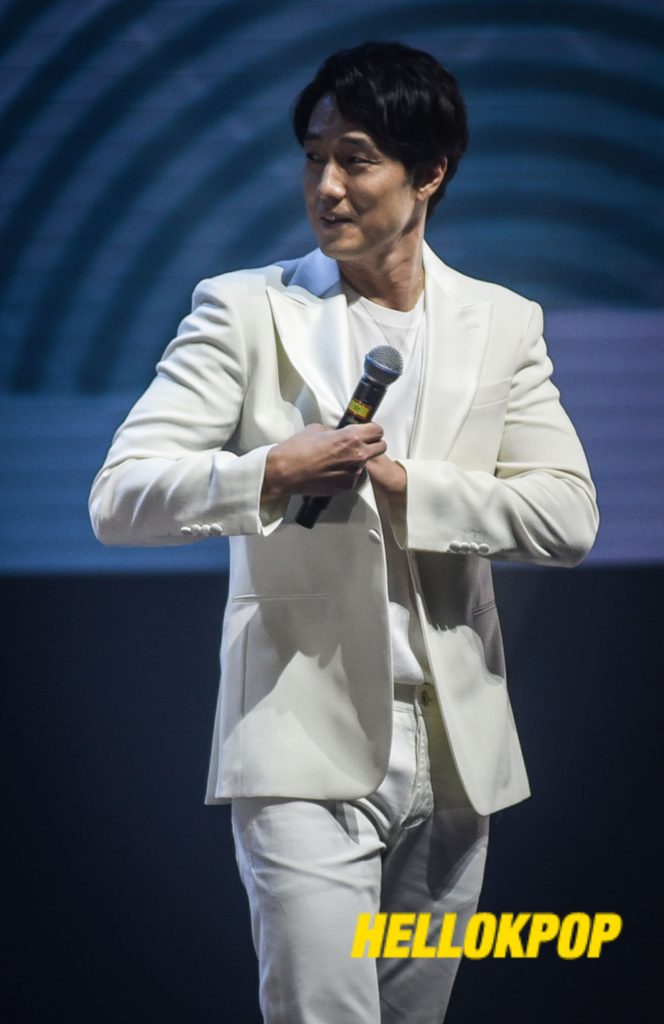 It was a “mission accomplished” moment for all the fans who finally saw their favorite actor in person, after following him in over 10 films and 25 drama series. Knowing to give nothing but the best fan service, the actor made sure to gift his supporters an exclusive chance to see him in the most candid way.

Stripped of his elusive public persona, So Ji Sub casually engaged with the crowd, with genuine smiles that made us acknowledge how he is the “coolest oppa” ever.

Reeling with happiness from the aftermath of So Ji Sub in Manila is expected. For those who missed the chance to see him, we will take you back to its ganziest highlights. And yes, you are all welcome.

Can’t smile without So Ji Sub

Emerging on the stage as soon as the lights dimmed, So Ji Sub greeted the audience with a soothing serenade of Barry Manilow’s “Can’t Smile Without You”. Garbed in white suit, his “first hello” in the country was met with deafening cheers and wide smiles from the fans.

Settling with the interpreter and host Kring Kim on stage, So Ji Sub formally greeted fans and revealed feeling nervous. He promised to create beautiful memories with the onsite fans.

Capping off his Asia tour in the Philippines, So Ji Sub answered wanting to enjoy the sun and to do some tanning when asked what he wants to do most in the country. He also shared how he chose “Hello” as the title of his tour because of its universal appeal. In his signature manly and knee-weakening voice, he said “Hello” to the audience who wildly greeted him back. 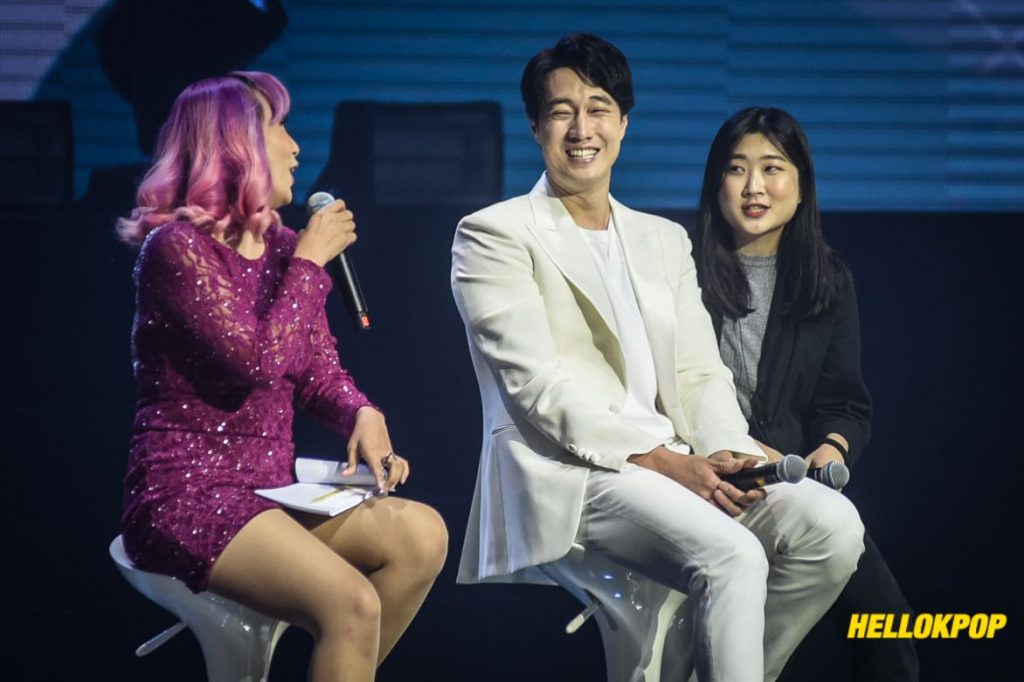 Known for keeping a low key social media presence, So Ji Sub had a hard time picking among eating, sleeping and traveling since he enjoys doing all of it. Prying on his airport fashion when he arrived in the country, So responded how he does not follow fashion trend. Instead, he wears comfy and loose clothing. Hat is an essential item completing his preferred look.

Immersing on the diverse culture as a Hallyu actor, So Ji Sub makes it a point not to eat Korean food when he visits his overseas fans. Hence, he enjoyed the local food (liempo dish) prepared for him. Listening to the crowd’s food suggestions, he said “As long as it is meat, I am good.”

Going to the topic of his recent high-rated drama My Secret Terrius, So remarked how parents gained his respect taking care of their children. As they filmed with children cast members, he confessed that it was hard since he had to play with the children to keep up their mood up.

Between shooting action scenes and the famous eskimo kiss scene, So Ji Sub was challenged more in doing the combat scenes. 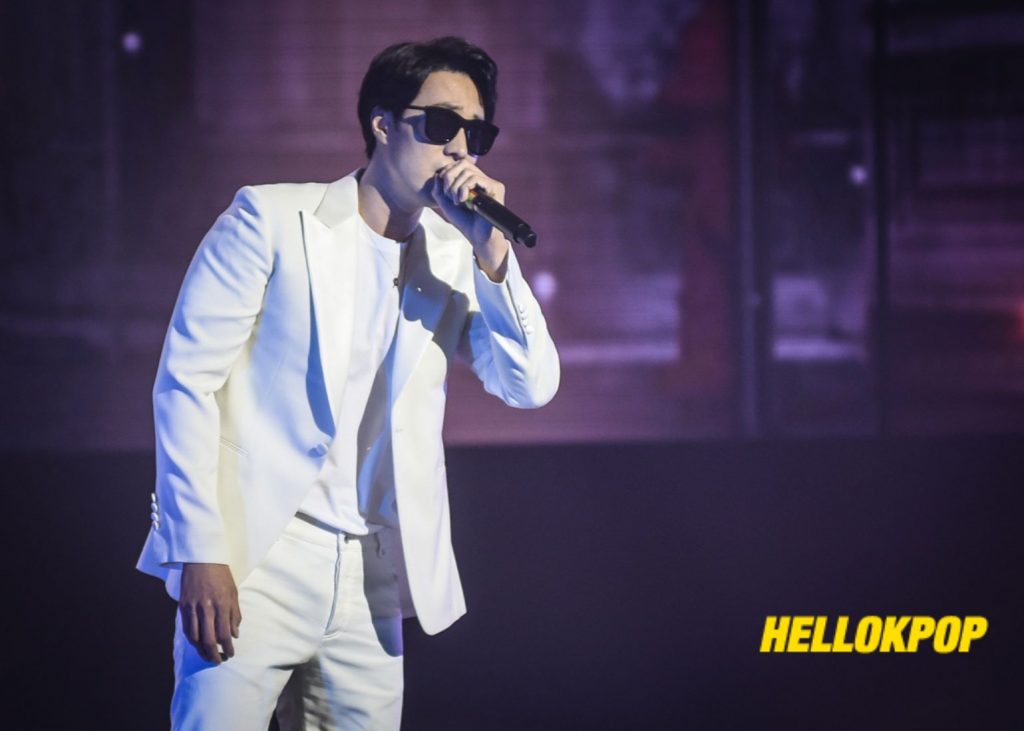 After warming up with his fans, So Ji Sub showed his counselling skill as he gave impromptu advice to selected fans who shared their problems. Not only did the artist wow us with his stunning visual, he also amazed us with his wisdom and sensibility.

For the first concern raised, So Ji Sub voiced out his opinion on overcoming quarter-life crisis.

“Even if I have been acting for 23 years I still have concerns. It’s normal, don’t be pressured. It’s fine. As long as you are sure of what you want to do.”

Sharing the sentiment of the second fan girl who cited her difficulty of finding an ideal man for her, So turned to a love coach with his realistic pep talk.

Swept by his charm, So Ji Sub elevated the night, firing his eloquent raps at drop beats as he enthused the welcoming audience with his track “Picnic”.

We sure had a PICNIC last night at #SOJISUBinManila! The multi-hyphenated artist swept us away with his engaging nature and surprises. Special thanks to @pulpliveworld for the invites

51 Things About So Ji Sub

One notable thing on his fan meet was the well-conceived videos. Resting on a quick break, fans were entertained with a video of candid So Ji Sub answering trivial questions delightfully. For every wrong or unanswered question, he got penalties, wearing crazy fun hats and accessories.

Q4: What do you usually do on rest days?
A: Workout!

Q6: What do you bring with you other than your phone, wallet and key?
A: Then nothing <insert So Ji Sub giggles>

Q7: What game did you play recently?
A: Gun Game

Q8: What song did you listen to recently?
A: Failed to answer

Q10: Why not?
A: thinking… failed to answer… penalty

Q13: What tourist spot in Seoul do you recommend?
A: 51K office <laughed at his answer>

Q14: Top excellence award, did you frankly go for that award?
A: Not to be greedy… But I did anticipate it a little bit.

Q15: Who is more handsome, Yoo Seung Ho or So Ji Sub?
A: Seung Ho is handsome. But I am attractive <poker I-am-hot face, beams at his remark>

Q16: If you are a woman, would you date Yoo Seung Ho?
A: Why should I think about this? (Director’s comment: So Ji Sub thinking seriously)

Q17: What do you want to say to the young So Ji Sub?
A: Work hard and do your best

Q18: What is the role you are most attached to?

A: I think all actors have similar thoughts about this. Eventhough I have a particular character I am attached to, I am what I am right now. Because I have done all those previous works all characters are precious to me.

Q19: Which actress is beautiful in person?
A: Too many

Q20: Follow up question: Please choose only one.
A: As I told you, too many! <audience laughed>

Q22: Which type do you like between the two: understanding woman or a woman with a lot of aegyo
A: Understanding person

Q23: A person I like or a person who likes me
A: failed to answer… said it was difficult

Q24: Pure woman or sexy woman
A: I think it’s better if they have both. (Director side comment: But we want to know)
A: Pure woman for now

Q25: Twice versus Red Velvet
A: For me Blackpink

Q27: Were you betrayed by a woman before?
A: WHAT??! What do you mean by betrayed?

Q29: Who do you think will get married later So Ji Sub or Song Seung Heon?
A: I think the older brother who is one year older should get married first?

Q31: In your raps, what is your most favorite?
A: <rapper So Ji Sub dropped his head> I cannot answer.

Q35: Is there any threatening junior actor or actress?
A: None

Q37: Watch versus bracelet
A: Watch

Q40: To guest on Radio Star or Knowing Brothers?
A: I won’t do both. I think it is really awkward. Entertainment shows seem stressful

Q43: Forever meat or forever vegetables only
A: You will die it’s dangerous

Q44: Who did you spend your New Year’s party?
A: Seung Heon hyung

Q45: Which has a higher possibility? Showing your family or your house?
A: I will not do both

Q47: Why?
A: Because you can do peck anytime conveniently. But a kiss you cannot do it any time, and a peck can be done anywhere.

Q48: Have you tried searching your name online?
A: I think I do it everyday

Q50: Any memorable fan support/cheer?
A: During the recent fan meeting spoke with a bit of a louder voice saying she felt happy after watching my works and acting. I felt happy when I heard that.

Q51: Is there anything you want to say to the fan who came today?
A: Have fun today and I hope it will become a happy memory. 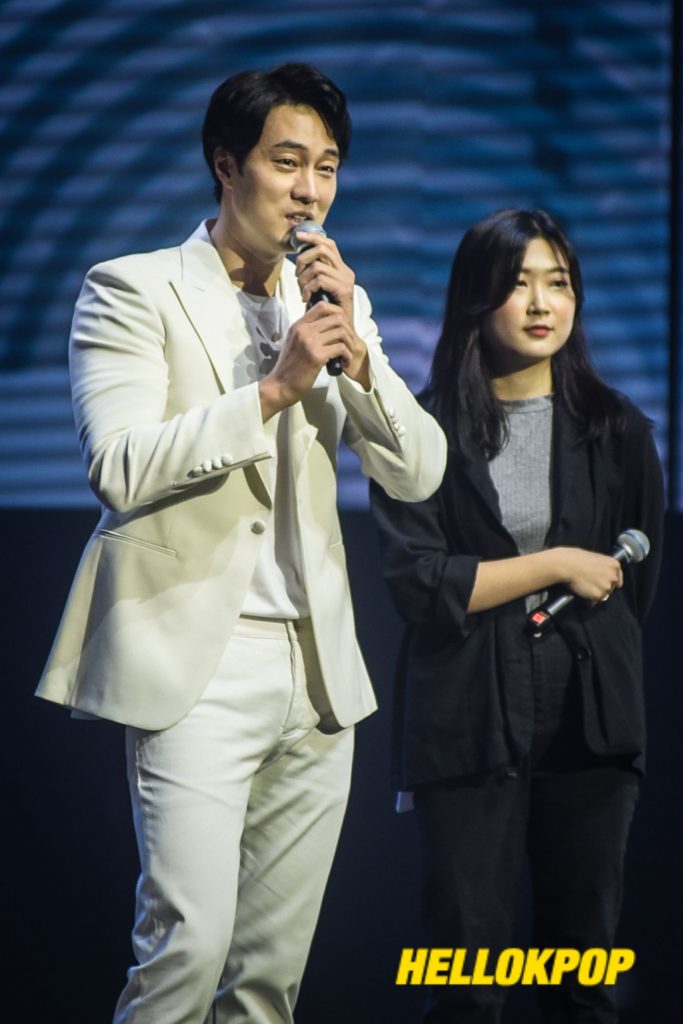 All About So Ji Sub

After a quick break, the man of the moment returned on the stage for more entertaining fan interactions. Testing his memory on the dramas he worked with, the quick to smile actor had to guess questions based on his dramas. If he failed to answer it, cute consequences would be given to him ranging from unique “good morning call”, wearing wings, and flower crown. Attendees participated to help surely, but ultimately led him to wrong answers for him to get the penalties. (hehe)

The segment made us aware that 35 band-aids were put on Kim Bon by Joon-Joon twins in My Secret Terrius. When he failed to guess the jackfruit inside a box, a souvenir “good morning call” for all fans to take home was captured.

Check out this cute penalty moments from the fan meet.

So GAME in engaging with fans!? #SOJISUBinManila just made us happy fan girls last night. We love the polished program, the classy audience, and the stress relieving party. Even now, the aftermath of sudden "oppa saranghae" outburst still happens when we think of the amazing date with #SoJiSub oppa. We really appreciate the invites @pulpliveworld & @happeehour. Thank you making our fan girl dream come true.

Not only did #SoJiSub wow us with his stunning visual and amazing rap skills but he totally won us over with his wisdom and sensibility.

Adorned by a smooth sailing program, a collective sigh of jealousy erupted when So Ji Sub personally gifted one lucky fan with a one-of-a-kind polaroid and a necklace he personally put on her. The lucky fan based in the United States had also attended her favorite actor’s fan meeting in Japan. Also, a few avid fans of the actor from Thailand, Japan, Taiwan and more have flown to witness the last stop of his HELLO Asia Tour. 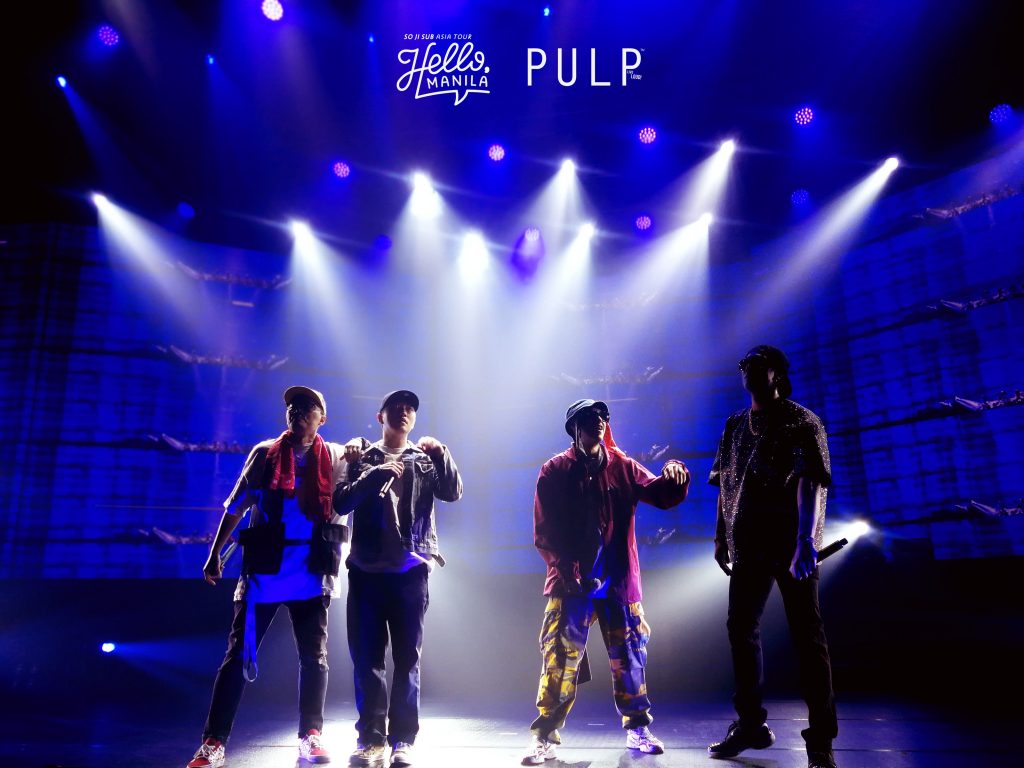 We lost count how many times the talented and witty oppa made us smile from ear to ear. That when he donned his rapper look, it was a done deal. Fans raised up in the air, we felt the music beats moved inside our bodies.

Together with Soul Dive, rapper So Ji Sub went on to treat his fans with a string of his popular hits, including a cover of iKON’s “Love Scenario”, “Good Night”, “Go Boy”, “aoaoa”, “So Ganzi”, “Coke Bottle Baby” and “So Love”. 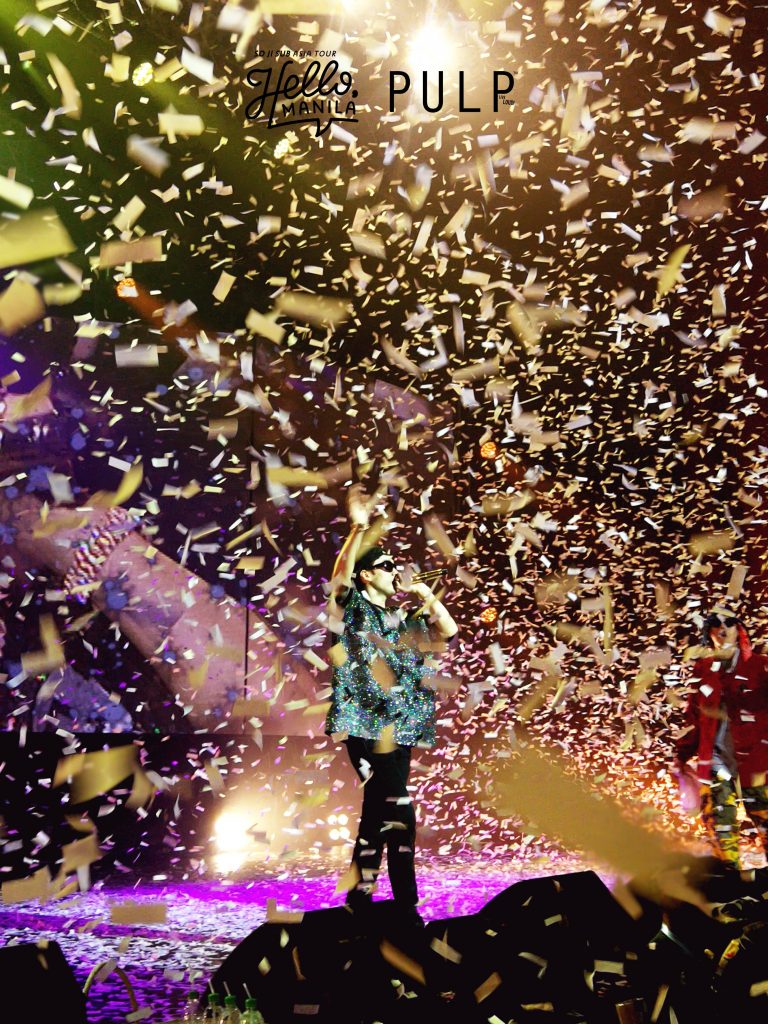 On a fan girl side note, one of the memorable perks of this segment was seeing So Ji Sub in his sweaty-shining-glory. He appeared so princey on the laid back first segment of the fan meet. Then he transformed to a fiery swagger owning the stage to fuel the lively crowd.

It was truly an all-in-one complete fan meeting package that complemented all those years of waiting for fans to meet their cherished artist.

The 2019 So Ji Sub HELLO Asia Tour in Manila is brought to fans by 51K, Live Nation and PULP Live World.

Hellokpop extends gratitude to PULP Live World for the media invitation to the event.