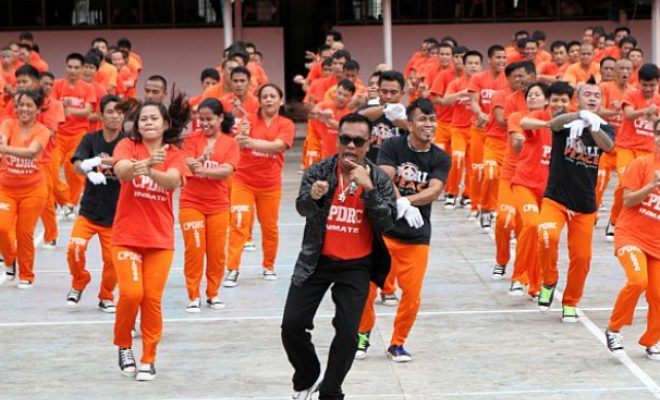 Have you seen any of these K-Pop themed performances of the Cebu Dancing Inmates?

In 2007, prisoners from the Cebu Provincial Detention and Rehabilitation Center received worldwide attention for their rendition of Michael Jackson’s hit “Thriller”. The viral video was ranked fifth by Time magazine in its Top 10 Most Popular Viral Videos of that year.

With their new-found fame, the prisoners, popularly known as Cebu Dancing Inmates, began to hold public performances, dancing to tunes by renowned music acts like Michael Jackson, The Black Eyed Peas, Queen, among others.

As Hallyu continues to rise in the Philippines, inmates also rode the waves of K-Pop, and used songs by Korean artists in their dance routines.

“Nobody” by Wonder Girls

The 2008 hit song of Wonder Girls was the first K-Pop song performed by the Cebu Dancing Inmates. “Nobody”, which received worldwide fame thanks to its catchy addictive music and dance moves, was performed by the prisoners on 30 March 2009.

“Lies” by BIGBANG and “Tell Me” by Wonder Girls

On 27 April 2009, Cebu Dancing Inmates followed up their K-Pop themed performance the month prior with another performance of K-Pop songs. This time, the prisoners channeled their inner BIGBANG and Wonder Girls during their “Lies” and “Tell Me” stages.

Super Junior members have also watched the performance of the prisoners.

2NE1’s debut song “Fire” also made its way to the prison cells on 29 August 2009 when the prisoners used it as the track for their live performance.

With the phenomenal success of “Gangnam Style”, it does not come as a surprise that the Cebu Dancing Inmates jumped the bandwagon, and performed Psy’s greatest hit.

At present, the Cebu Dancing Inmates do not hold public performances monthly as they used to. Instead, the prisoners perform by request.

Like most detention and rehabilitation facilities in the Philippines, the Cebu Provincial Detention and Rehabilitation Center suffer from congestion. In 2016, the facility has more than 3,000 inmates — a 100 percent over than its capacity of 1,500.

Despite the worldwide fame they achieved, the problems of jail management remain rampant, not only in Cebu, but in more places in the Philippines.

The videos in this article are from the YouTube channel of Byron F. Garcia, the official security advisor of the Cebu government at that time.

Hellokpop, as an independent Korean entertainment news website (without influence from any agency or corporation), we need your support! If you have enjoyed our work, consider to support us with a one-time or recurring donation from as low as US$5 to keep our site going! Donate securely below via Stripe, Paypal, Apple Pay or Google Wallet.
FacebookTwitter
SubscribeGoogleWhatsappPinterestDiggRedditStumbleuponVkWeiboPocketTumblrMailMeneameOdnoklassniki
Related Items2NE1BigbangCebu Dancing InmatesPsySuper JuniorWonder Girls
← Previous Story French Social Media Company Irks BTS ARMYs With Offensive Post & Tweet, Agrees To Apologize
Next Story → #3YearsWithSEVENTEEN: 17 Messages From Carats For Three “Mansae” Years Of SEVENTEEN