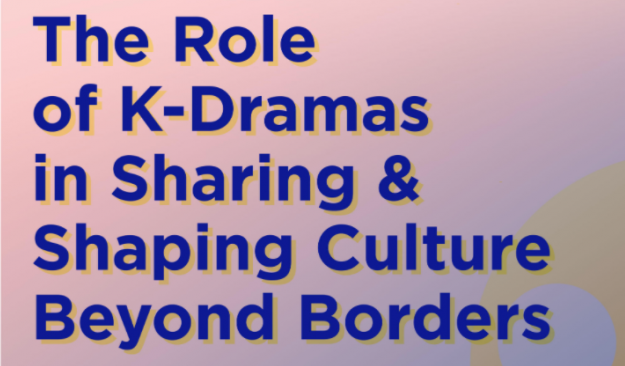 The Korean Cultural Center delivers fans with an in-depth exclusive into the world of K-Drama through a free webinar!

The Embassy of the Republic of Korea and the Korean Cultural Center Philippines, in collaboration with MIND S-Cool and the BGC Arts Center are hosting a free, live webinar titled The Role of K-Dramas in Sharing and Shaping Culture Beyond Borders. The webinar is part of the Embassy’s Korea at Home campaign and will include various discussions on K-Drama production with Korean entertainment industry professionals. Additionally, it will also include opinions from some of the Philippines’s most celebrated entertainment practitioners.

The one-time event occurs on November 6-7 from 9:30 AM- 12:30 PM GMT+8 and is open to all participants who wish to join. The webinar will be streamed live from the Korean Cultural Center’s YouTube Channel and BGC Arts Center’s Facebook page. 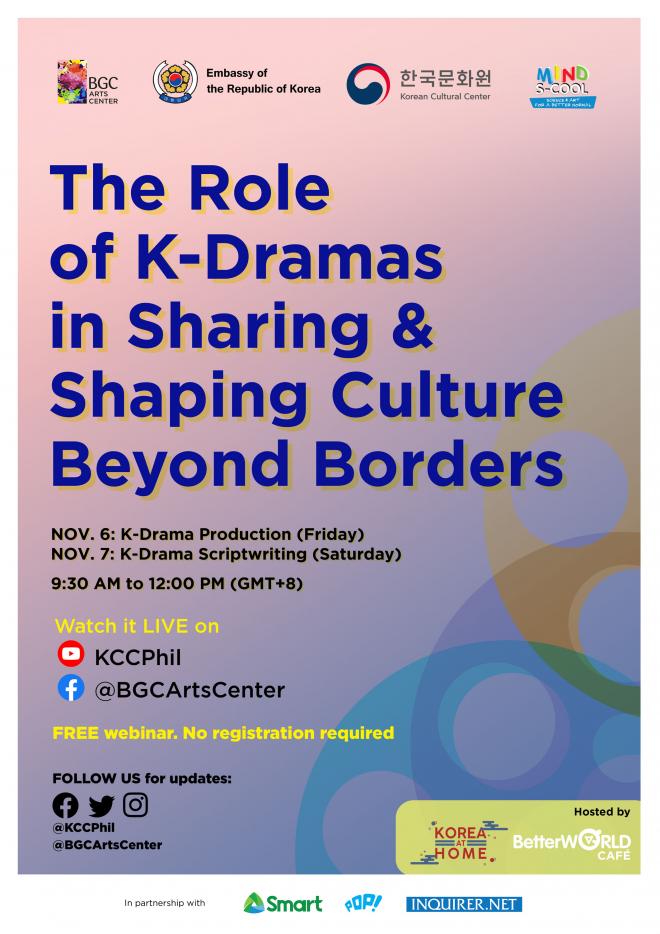 Pinoys have found a particular fondness for Korean dramas. In the early 2000s, many shows such as Endless Love: Winter Sonata (2003-2004), Full House (2005), and Lovers in Paris (2005), found massive support with Filipino audiences, and all shows eventually gained a Filipino teleserye remake.

K-Dramas fuelled the Korean wave–also coined as the Hallyu wave–in the Philippines, which continues to gain momentum with the increased accessibility to dramas due to digital streaming services. During the COVID-19 lockdown, Netflix Philippines’  Top 10 trending shows were mainly Korean dramas or movies. Joey Reyes joins the webinar to discuss the extraordinary worlds within K-Dramas, while assessing how the love Filipinos show Korean dramas is entirely unique.

Moreover, the webinar will be full of more exciting discussions. The first day will cover K-drama production with the Korea Creative Content Agency’s Chief of Broadcasting Industry Team, Lee Young-hoon, and Pan Entertainment’s Vice President and Head of Drama Production, Kim Hee-yeol leading discussions. Pan Entertainment is the agency backing many beloved dramas including Endless Love: Winter Sonata, Fight For My Way, Kill Me, Heal Me, Moon Embracing the Sun and the recently popular Record of Youth. Award-winning Filipino director and president of the Cinemalaya Foundation, Laurice Guillen will also join this talk.

Subsequently, day two of the webinars will revolve on K-Drama scriptwriting headed by the renowned Korean screenwriter Kim Yoon-young who penned KAIST as well as award-winning writer, director, and professor, Jose Javier Reyes.

The event as a whole aims to unite conversations between Korean industry and local entertainment professionals and industries. Throughout the discussions, they will exchange media knowledge and tools, so that both countries can grow together and produce richer shows and content. Furthermore, the event provides a great place to connect and potentially make way for collaborations in the future.

Any interested K-Drama fans are invited to learn more about the world of K-drama production while connecting conversations to local teleseryes. Moreover, the Korea Culture Center Philippines will host a question and answer session before and during the webinars that will give viewers a chance to win great prizes.

K-Drama lovers will not want to miss this one-time event!