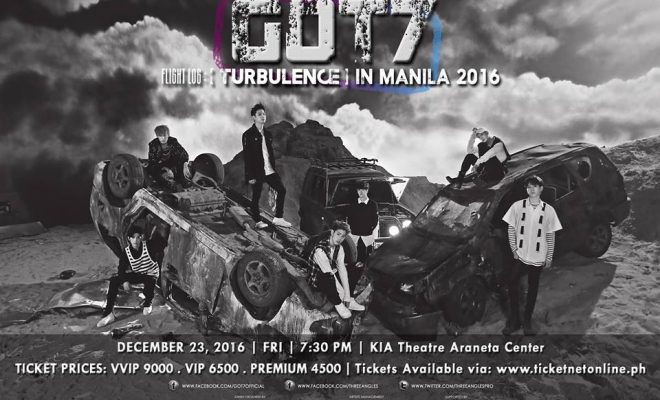 GOT7: Filipino Fans Are Getting ‘Cuter’ And ‘Hotter’

Two days before Christmas, GOT7 landed in the Philippines, and caused severe ‘turbulence’ in the capital city, Manila. The septet literally blew the crowd away, with impressive performances and entertaining games.

JB, Jackson, Jinyoung, Mark, Youngjae, Yugyeom, and Bambam did not disappoint, as they gifted fans with sheer talent and charms for their third visit in the Philippines.

The boys opened the show, with their soul-stirring and soothing voices from songs of their ‘Flight Log: Turbulence album’, Let Me and Prove It.

The idols got their fans’ hearts beating erratically with live performances Boom Boom Boom and No Jam. The two songs were also part of the group’s second studio album released back in September.

GOT7 owned the stage with powerful dance moves and vocals of title songs, Fly, If You Do, and Hard Carry from the EPs ‘Mad’, ‘Flight Log: Departure’, and studio album ‘Flight Log: Turbulence’ respectively.

Read: GOT7: Malaysia Will Always Have A Place In Our Heart

The crowd went wild with youngest member Yugyeom’s passionate dance. But the venue got even hotter as all members of GOT7 went on an arousing dance relay, beginning with rapper Jackson and playfully capping it off with the show’s MC.

After rendering the crowd speechless with their fatal moves and a bit of abs courtesy of Mark, it was the members’ turn to be surprised when they realized there was an attendee as young as five years old.

Bambam urged the youngster to close her eyes, and forget about the scene that happened a while back. “Welcome to the real world,” he said, garnering cheers and laughter from the crowd.

Leader JB then captivated IGOT7s with his sweet vocals, as he belted out Forever Love, his official sound track for ‘Dream Knight’ and ‘Just Once’, his recent collaboration with fellow JYP artist, Baek Ah Yeon.

Youngjae brought the Christmas spirit into the venue with his rendition of All I Want For Christmas Is You.

‘Legend of the Blue Sea’ actor Jinyoung reminded the crowd of his singing prowess with The Star, his self-written song from the group’s repackaged album Mad Winter Edition.

Bambam and Yugyeom entertained the crowd to the beat of Juju On That Beat with their dance moves.

Bambam became special Santa for IGOT7s, as he granted all his members’ and audience’s request of singing the Filipino song Ngiti by Ronnie Liang, Call You Mine originally by Filipino-American singer Jeff Bernat, and the recent internet craze PPAP (Pen Pineapple Apple Pen).

The fans took the opportunity to wish JB for his coming birthday on January 6, with a cake and special video presentation.

JB thanked the fans for the birthday treat, and promised to return as a better JB in the future. “Every time I come here, you guys are always giving me so much love,” he said.

The GOT7 members also extended gratitude to their fans, and promised to return with better performances and music soon.

“Last time was really good too, but this time was a thousand times better,” Bambam added. He also complimented that the fans were getting “cuter” and “hotter”.

Oldest member Mark named the Philippine crowd as “the loudest crowd” that the group has experienced so far, thus earning more loud cheers from the audience.

IGOT7s likewise expressed their love and support for the boys with a special video presentation dedicated to them. Together, the boys and their fans looked back to the group’s debut till the present. The video ended with a special message from the IGOT7s that they will always “hard carry” GOT7.

“Thank you very much for showing us so much support and love every time we come here. We promise to come to Manila with better performances,” JB said.

Mark added, “The seven of us make up GOT7. But then because we have our IGOT7, that makes us complete.”

‘GOT7 Flight Log: Turbulence in Manila 2016’ capped off with a performance of Home Run from ‘Flight Log: Departure album’. The song was written and composed by JB, along with Daniel Kim and Park Jiyeon.

The members bade farewell to their fans with a group greeting and thankful bows. VVIP ticket holders got the chance for either photo opportunity or hi-touch session.

Prior to the Manila leg, GOT7 captivated the country’s Queen City of the South, Cebu, on December 21. The particular show was the first one of the group to be outside of the capital city.

‘GOT7 Flight Log: Turbulence in Manila 2016’ was brought to fans by Three Angles Production.

Hellokpop would like to extend thanks to Three Angles Production for the media invitation.

Hellokpop, as an independent Korean entertainment news website (without influence from any agency or corporation), we need your support! If you have enjoyed our work, consider to support us with a one-time or recurring donation from as low as US$5 to keep our site going! Donate securely below via Stripe, Paypal, Apple Pay or Google Wallet.
30
SHARES
FacebookTwitter
SubscribeGoogleWhatsappPinterestDiggRedditStumbleuponVkWeiboPocketTumblrMailMeneameOdnoklassniki
Related ItemsbambamFlight Log: Turbulence in ManilaGOT7JacksonJBJinyoungjyp entertainmentMarkThree Angles ProductionYoungjaeYugyeom
← Previous Story GOT7’s Jackson Leaves Wise Words To Filipino Fans
Next Story → ‘ONE K Concert in Manila’ Confirmed For March 2017