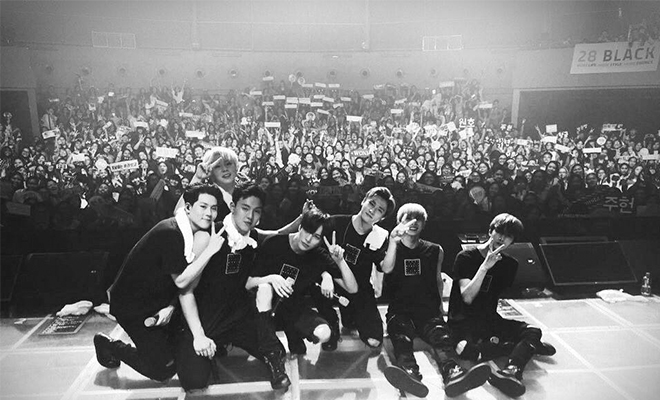 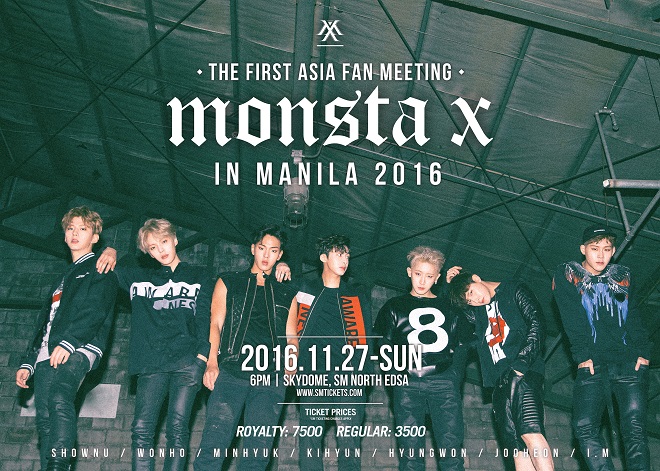 Shownu, Wonho, Minhyuk, Kihyun, Hyungwon, Jooheon and I.M. showed their love to their Filipino fans by preparing wonderful stages for them.  Furthermore, they were also able to play games with their lucky fans.

Before the show started, a short film was shown to the fans as an introduction to the whole event. It exhibited the members and their acting skills, which definitely hyped the fans.

As soon as Monsta X appeared in their silky white jackets, the fans immediately went wild. For their first stage, the boys performed their hit track Trespass, which showed their manly charms.

Due to excitement, the fans started chanting and singing along together. Shortly after, the boys performed Steal Your Heart, which further warmed up the audience. 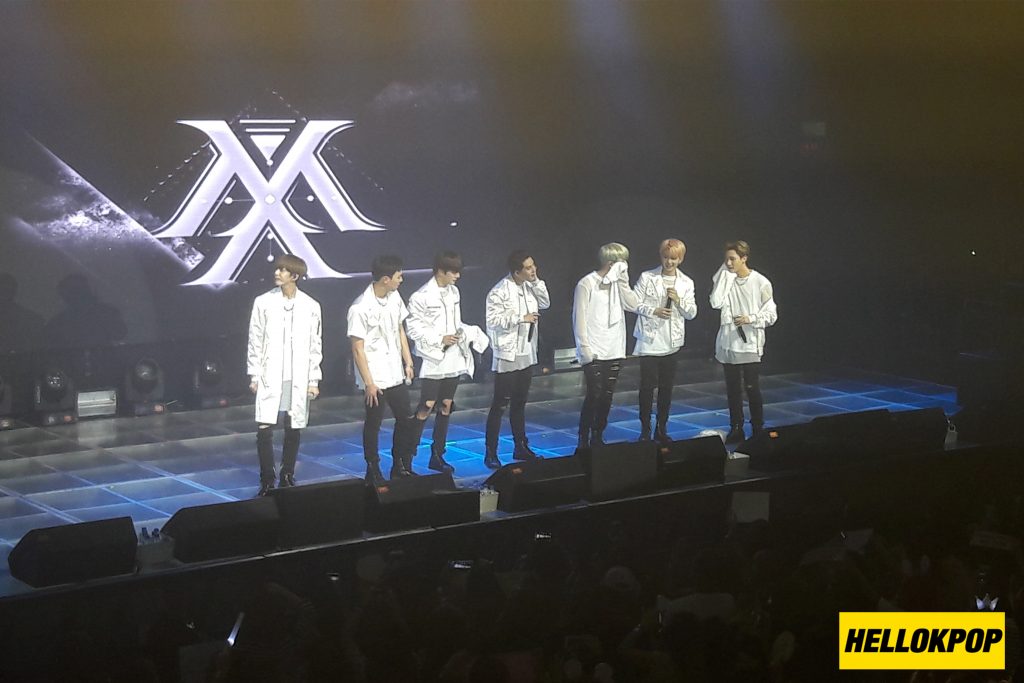 After performing, Monsta X took a short break and greeted the fans in Filipino. It was obvious that they were delighted based on their shouts and cheers. They then introduced themselves formally and waved cutely in every direction.

Before the group played ‘Truth or Lie’, they first performed Pop-R&B songs such as Ex-Girl and Honestly. Since the songs did not require much energy to dance, the boys were able to relax while interacting with their fans by waving or making eye-contact as they performed.

When they finished singing, a table and lie-detector were brought out for the game. The rule was that when a member answered truthfully, he would not be able to feel the electric shock from the machine. 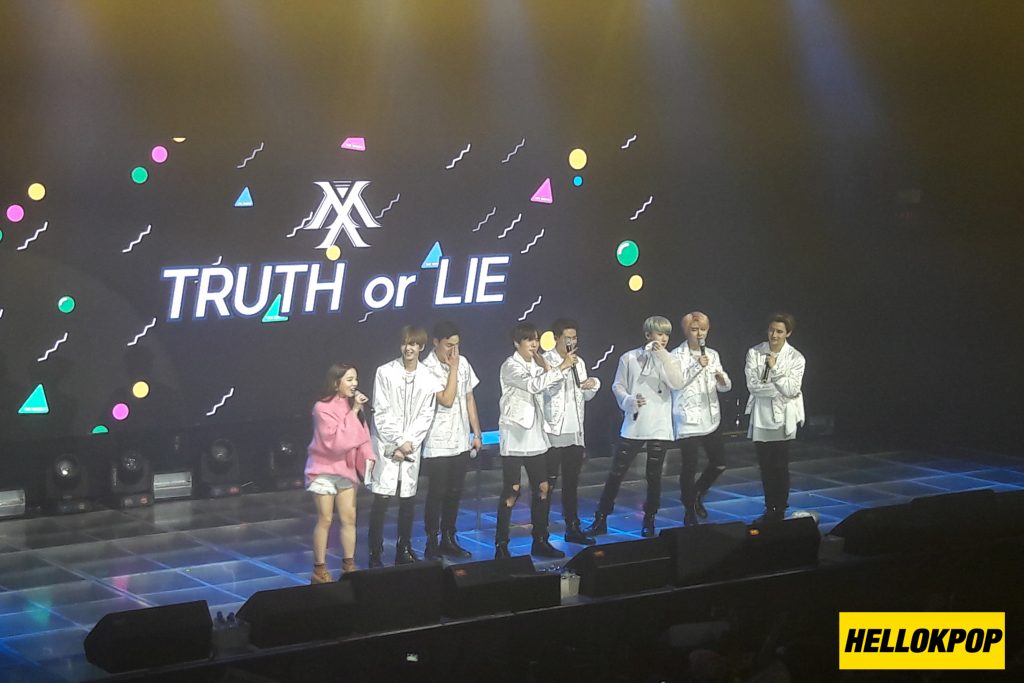 The MC explaining the mechanics to Monsta X

One of the game highlights was when Minhyuk was asked if he pretended to take a nap to avoid cleaning. While he answered ‘no’ with much conviction, the machine dictated that he was lying, to which the other members agreed to.

A follow-up question was then asked if he had pretended not to hear Kihyun’s scolding. He answered with ‘Everyday’. When asked why he was doing it, he just said that it was ‘stress’. 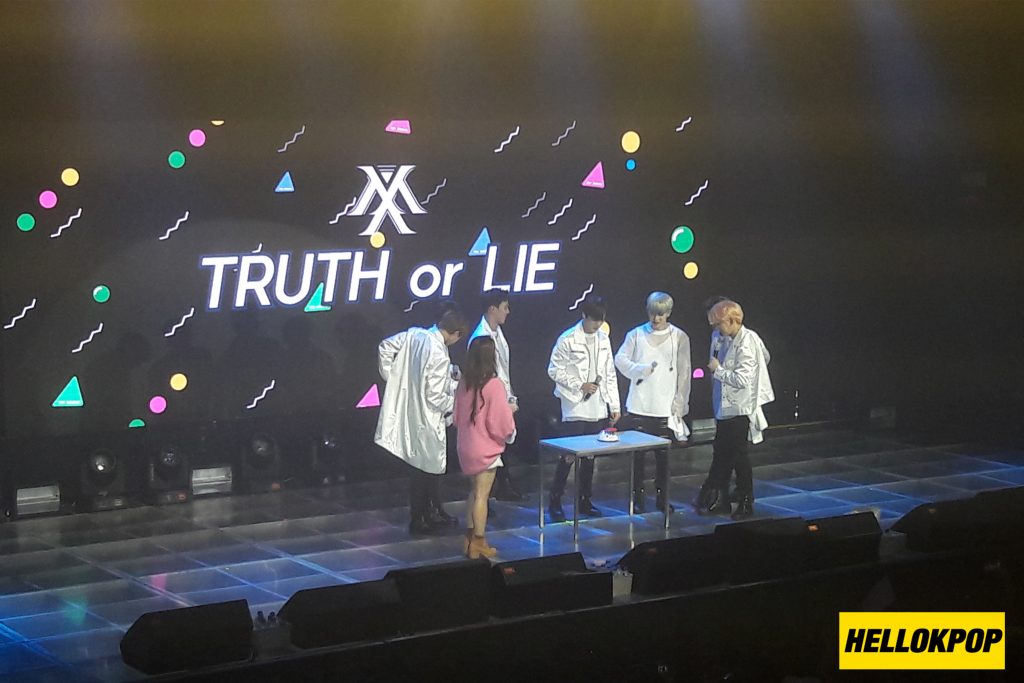 Minhyuk about to play Truth or Lie

Another highlight was on Wonho, if he thinks that he is the best at taking selfies among the members. He was confident with his answer ‘no’.  However, the machine said he was lying. When asked for selfie tips, he said that his selfies look good because he always thinks of fans when taking one.

After the game, Monsta X prepared a heavy hip-hop stage, and performed Hieut and 0 (Young) to show off their fascinating rapping skills. 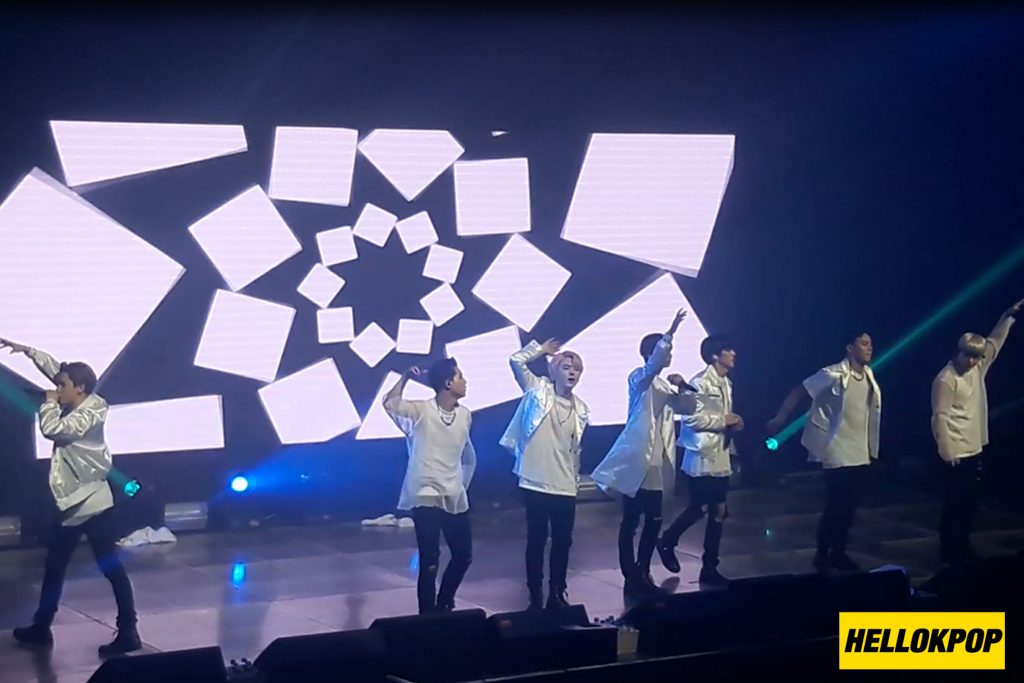 Named after the song from The Clan Pt. 2 <GUILTY> album, Be Quiet, the members played charades with some lucky fans.

Each member drew a number from a lot, which corresponded to a certain fan. The selected fan would be the member’s partner for the game, and had to guess the word(s) that the boys acted out depending on the category they picked up. 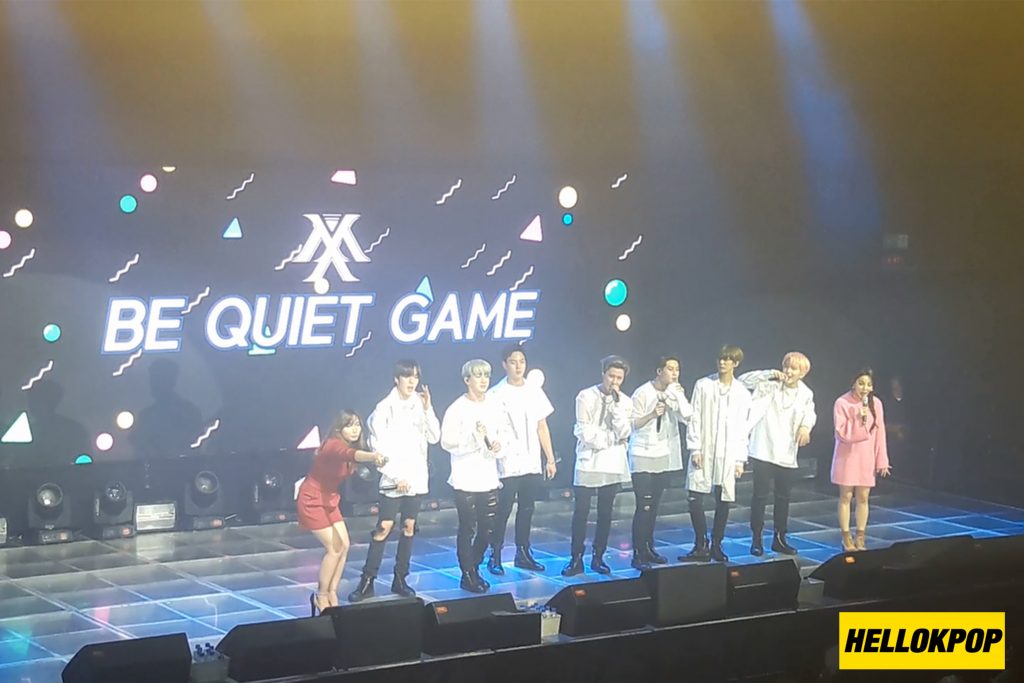 Ms. Kring introduces the game to the boys and the fans. 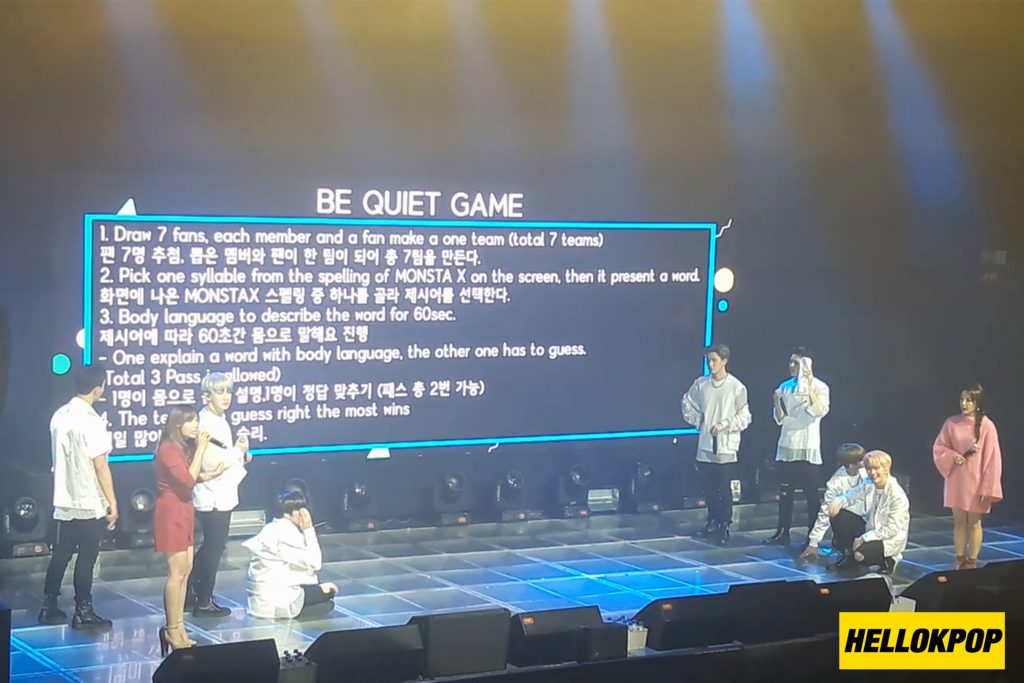 Ms. Kring explains the rules to the boys and the fans.

Each member tried their best to act out the words using their bodies. The winner of this game turned out to be Kihyun and his partner. The two had guessed nine words correctly from the Sports category. As her prize, she received back hugs from the members.

Yes. You read that right. From ALL the members. 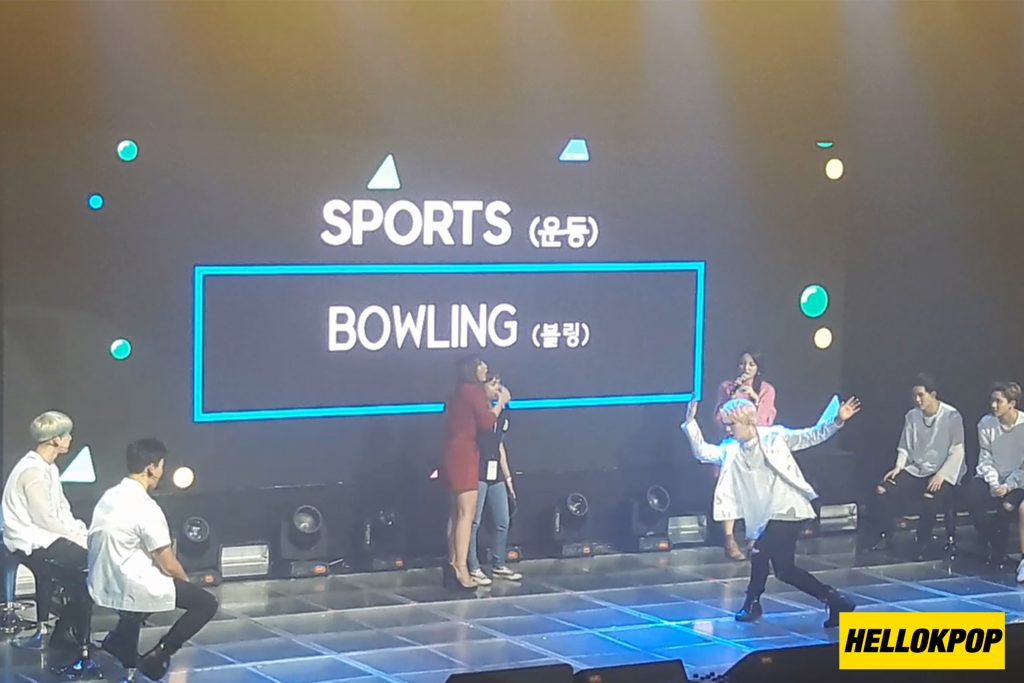 Kihyun and his partner playing Be Quiet Game

To end that segment with a bang, they performed their track Be Quiet.

When Wonho, Jooheon and Minhyuk returned from a break, they wore a pajama costume called onesie. As if that was not enough to prove their adorable side, they covered GFriend‘s Me Gustas Tu. 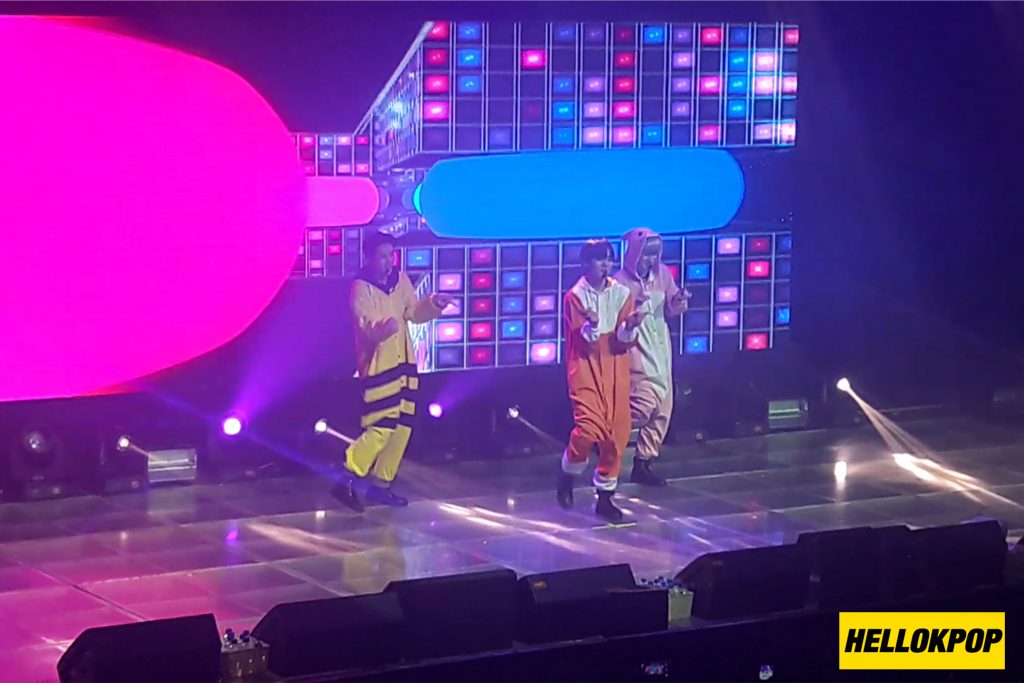 Minhyuk, Wonho and Jooheon dancing to GFriend’s Me Gustas Tu

While the three exited the stage, Hyungwon, Shownu, Kihyun and I.M. took over and danced to Red Velvet‘s Dumb Dumb. 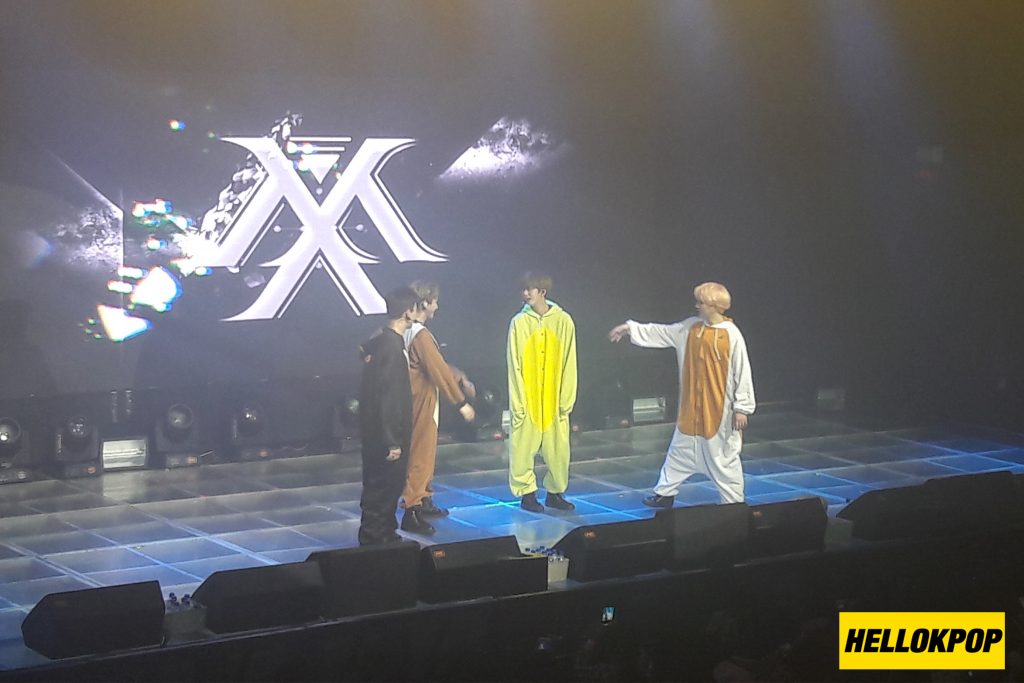 Shownu, IM, Hyungwon and Kihyun on the stage in their onesie pajamas.

Later on, they all danced to Twice‘s Cheer Up, which capped off the cutest segment of the fan meeting. 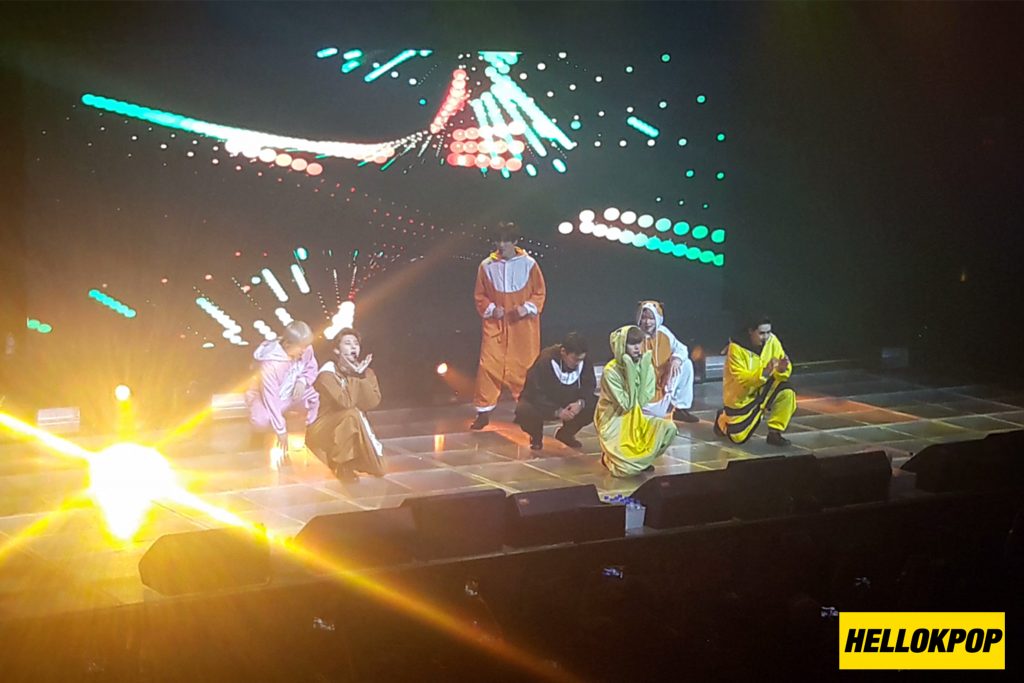 Back To Being Cool Guys Part I

After the super cute surprise from the boys, they were back to being cool idols by changing their costumes to red jackets, and performed songs from their The Clan Pt. 1 <Lost> album, entitled Stuck, followed by All-In. 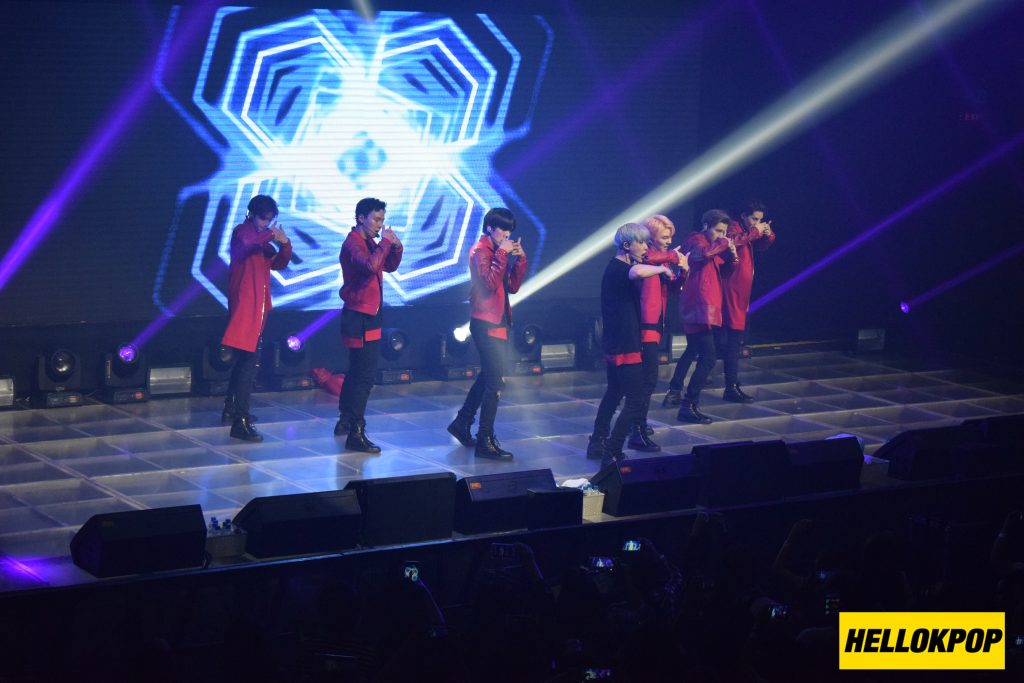 Minhyuk and Wonho flashed their abs when they danced to Hero to intensify their performance. 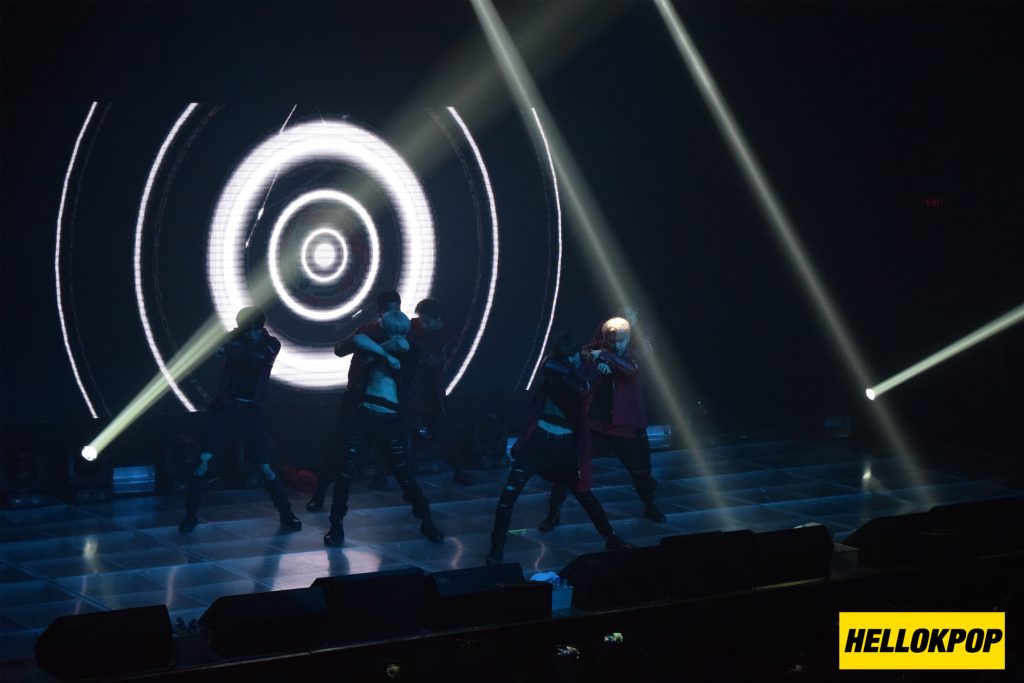 Wonho and Minhyuk flashing their abs while performing Hero.

Since Minhyuk and Kihyun are November babies, the fans prepared birthday cakes to show them how much they appreciate their existence. 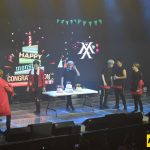 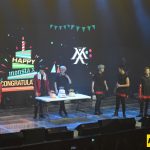 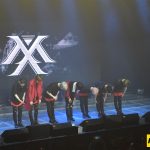 Monsta X bowing as a sign of gratitude to their fans.

Back To Being Cool Guys Part II

After thanking Monbebes for the cakes they prepared, the boys started performing Rush and Fighter, which continued to show their manliness. 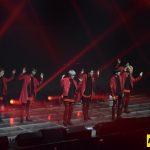 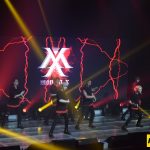 There’s no such thing as goodbyes

As the fan meeting came to a close, Monsta X sang Sweetheart and Amen to bid goodbye to everyone who came to bond with them. Both songs are quite far from their usual hip-hop music.

Additionally, it fitted the closing atmosphere perfectly, giving off a wanting yet refreshing feeling. 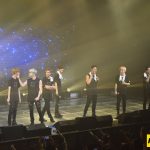 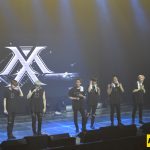 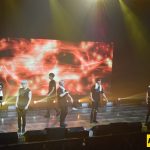 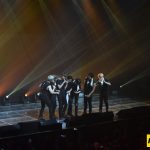 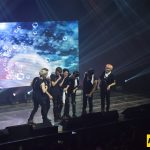 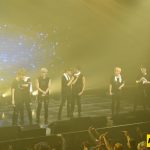 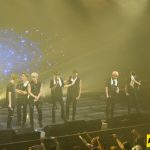 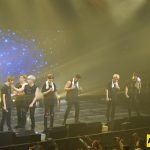 To officially end the fan meeting, the boys took a group photo with the fans as a remembrance of the event. They also walked hand in hand to every corner of the stage, before bowing to their fans which melted hearts. The boys also said ‘Salamat’ (Thank you) and ‘Mahal namin kayo’ (We love you) to the audiences. 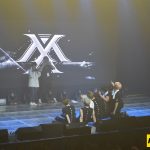 Monsta X taking a group photo with their fans as a remembrance. 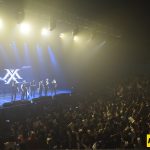 When Monsta X exited the stage, an outro video was played to conclude the event, which all Monbebes looked forward to.

‘MONSTA X: The First Asia Fan Meeting in Manila was made possible for the fans by PULP Live World, SM Skydome and SM Tickets.

Hellokpop would like to thank PULP Live World, Happee Sy and Vernon Go for the invitation to the press conference and the show.

Event covered by: Danica Lacson and Darla Laserna of hellokpop.

78
SHARES
FacebookTwitter
SubscribeGoogleWhatsappPinterestDiggRedditStumbleuponVkWeiboPocketTumblrMailMeneameOdnoklassniki
Related ItemshyungwonimjooheonkihyunMinhyukmonsta xMONSTA X: The First Asia Fan Meeting in ManilaPulp Live WorldshownuStarship Entertainmentwonho
← Previous Story VIXX As Fantasy-idol, To Conception of Zelos, Hades, Kratos
Next Story → GOT7: Malaysia Will Always Have A Place In Our Heart