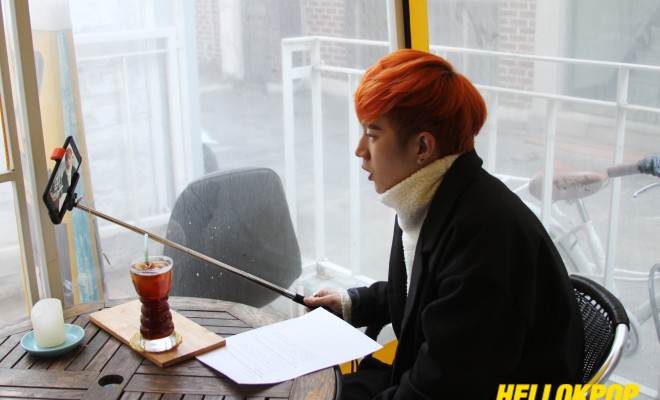 All K-pop idols have a story to tell on how they rose to fame. While some have fairy-like stories of how they were discovered, the actual reality is that the rise to stardom is much more strenuously complex. For independent musician A.Bounce, it’s still an ongoing journey for his musical career, where he is absolutely determined to share his music with a lot of people.

This time, we were glad to have A.Bounce with us, in sharing his story to us and our readers. We decided to meet at a little cafe serving churros just off the main street of Hongdae, Seoul’s indie music scene. Unlike other idols we have interviewed in the past, he came without an entourage – no manager or stylist, just himself. He greeted us nervously and we could immediately sense that he didn’t have much experience being interviewed. We passed him the list of our interview questions to read over, so that he wouldn’t be taken aback by any of them. The interview was held outside of the cafe, in the chilly winter of Seoul.

In order for the interview to be more personal and comfortable for him, we decided to experiment and passed him a selfie stick. When we told him our plans, he said: “”I’m so nervous, sorry. But I will try.”

Better known by his real name, Kim Sung Min, the 26 year old was in a group called Monster-V a couple years ago. After the group parted ways, A.Bounce decided that he would audition and meet several agencies, but he had little luck. That was when he decided that he would write and release his own music without the help of a major agency.

“My heart ached to think that my music career might end without having people hear my music,” he said. “I wanted to let people know that A.Bounce and Kim Sung Min exists.”

Last month, he released his first self-composed song titled Snowing, which was written with the help of a friend. His lack of marketing skills was evident when he couldn’t seem to up-sell his song, but nevertheless it was a humble approach.

“Honestly, the sounds of the artificial instruments aren’t that great but I did whatever I could.” He said as he shivered in the cold outside the cafe.

Snowing is a song about a guy falling in love at first sight. It attempts to express the actual feelings of a guy when he falls in love with a girl for the first time. A.Bounce said that the song’s lyrical content was quite straightforward and he was worried whether the song would be censored to only 19+ adults and if people would like his music.

He got inspiration for the song after visiting bars and clubs, and tried to learn what it was liked to fall in love at first sight by observing people.

Being an unsigned artist means that one will have total creative freedom and for A.Bounce, he was comfortable and happy with what he is producing.

The singer then named BIGBANG as his inspiration for learning to dance because their dance moves are simple but cool.

Despite being in the industry for many years now, A.Bounce’s determination to realise his dream and prove himself to his sick parents, is probably going to be his biggest asset in reaching his goal.

“I want to show my parents with my success one day and also to the people who have helped me, I want to show a better me to them.”

He plans to release more songs to expose his music to new fans before being able to release a full-length album.