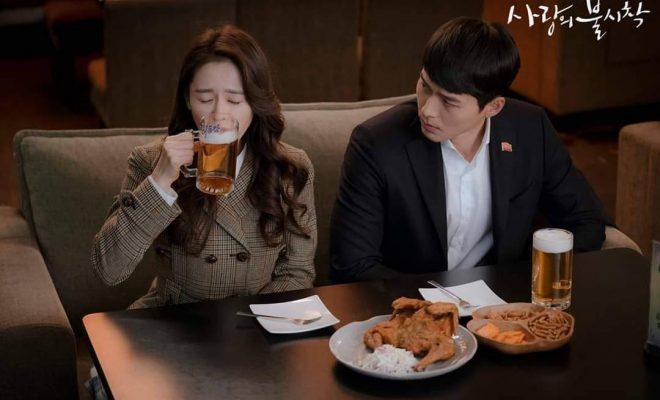 It’s the send-off week for the endearing K-Drama series, Crash Landing on You!

Deserving of initiating this new feature segment from our drama team, Crash Landing On You is an addicting series that easily makes someone feel good. Brimming with saccharine treats, there has been no dull moment happily witnessing how love blooms between a South Korean heiress and a North Korean elite army captain.

Given how rom-com stories often take the bulk of K-Drama lineup each year, it is massive feat to create one that would simultaneously garner online raves while scoring impressive viewership numbers.

As much as we don’t want the drama to end, the closure that fans are most likely stressing out these days is going to happen.

While awaiting the finale, let’s look back on the best scenes and memories from the drama that delightedly pictured a romance story defying the borderline between two Koreas. 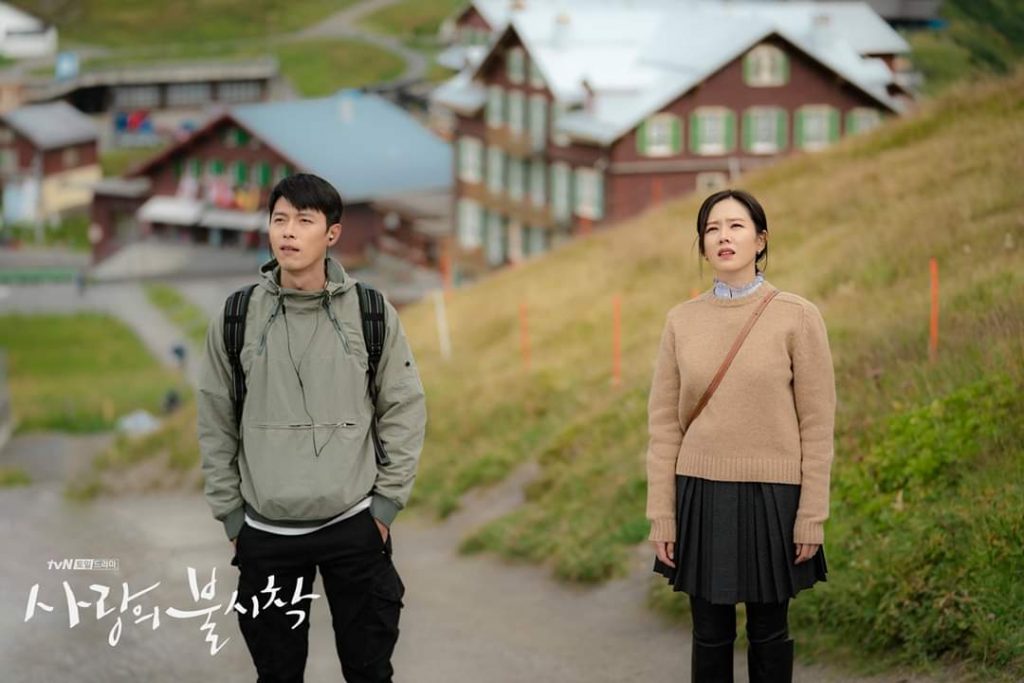 That fated encounter in the forest

For Hyun Bin fans who are still pouting at the uncertainty of a second season in his stint at Memories of the Alhambra, all disappointments melted when he graced the screen donning military fatigues.

He looked robust and healthy and about to shoot the intruding heroine who would change his life unexpectedly.

With Se Ri’s mishap, she crashes at Jung Hyeok’s place and struggles to survive without the luxurious life she is used to.

Using her existence in North Korean soil as a leverage, she bargains mutual agreement for Jung Hyeok’s team to find ways to send her back to South Korea. On her part, she keeps her mouth shut about the team’s dereliction of duty. 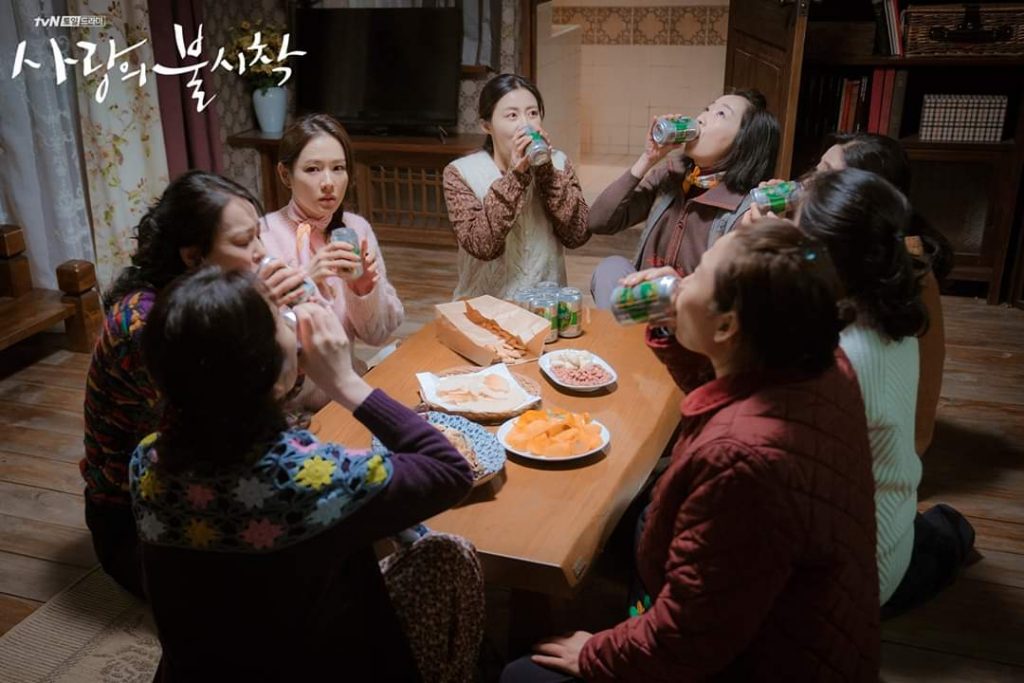 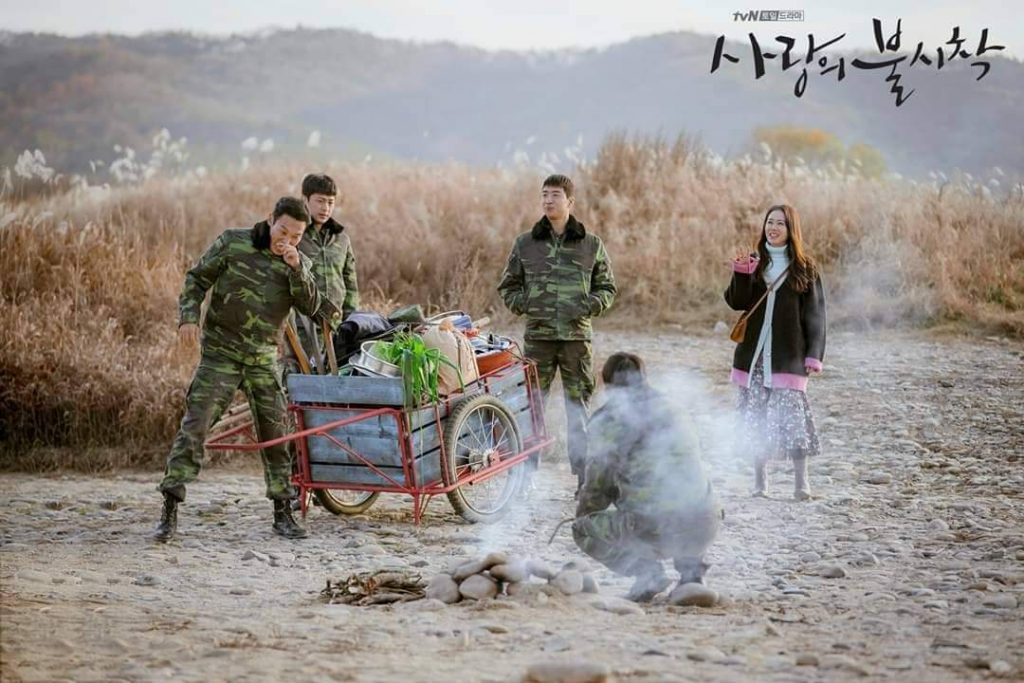 Every episode of Crash Landing on You has had its female following wished to be on Son Ye Jin’s place. Being reincarnated to be her is not a bad idea either.

Especially in those how to be you Son Ye Jin scenes.

Jung Hyeok visits the market place to appease the nagging requests of the woman who invades his place. 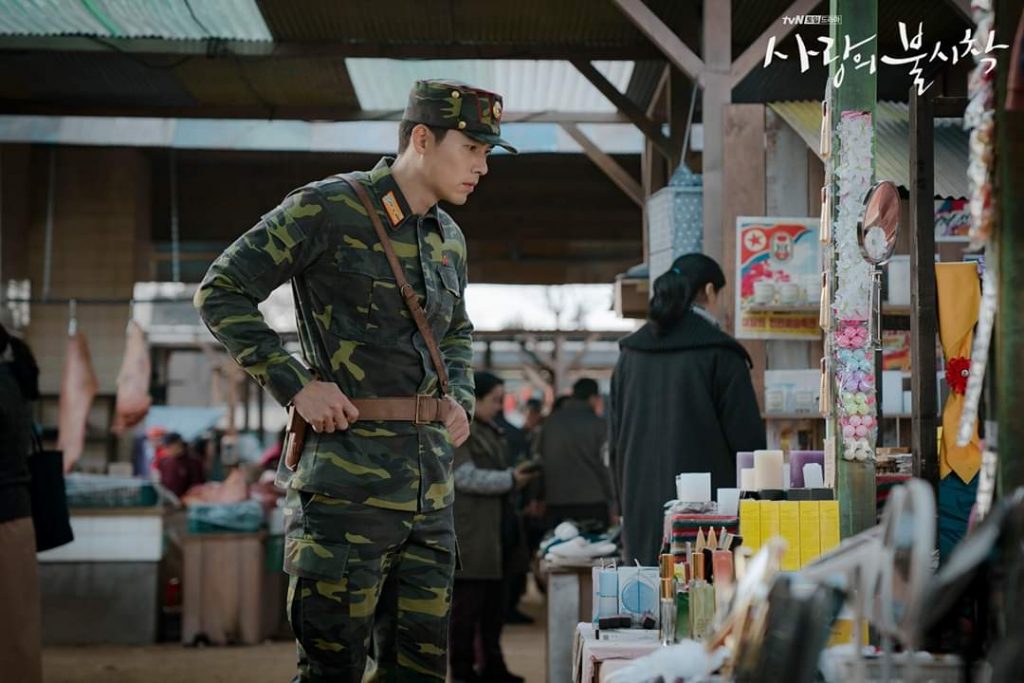 That Se Ri’s giddy feeling in the scene when Jung Hyeok tied her hair sent the audience to heart-fluttering bliss. Who wouldn’t?

Being in close proximity with Jung Hyeok while riding a bike in a romantic treeline setting made Se Ri one lucky woman viewers can be jealous of. 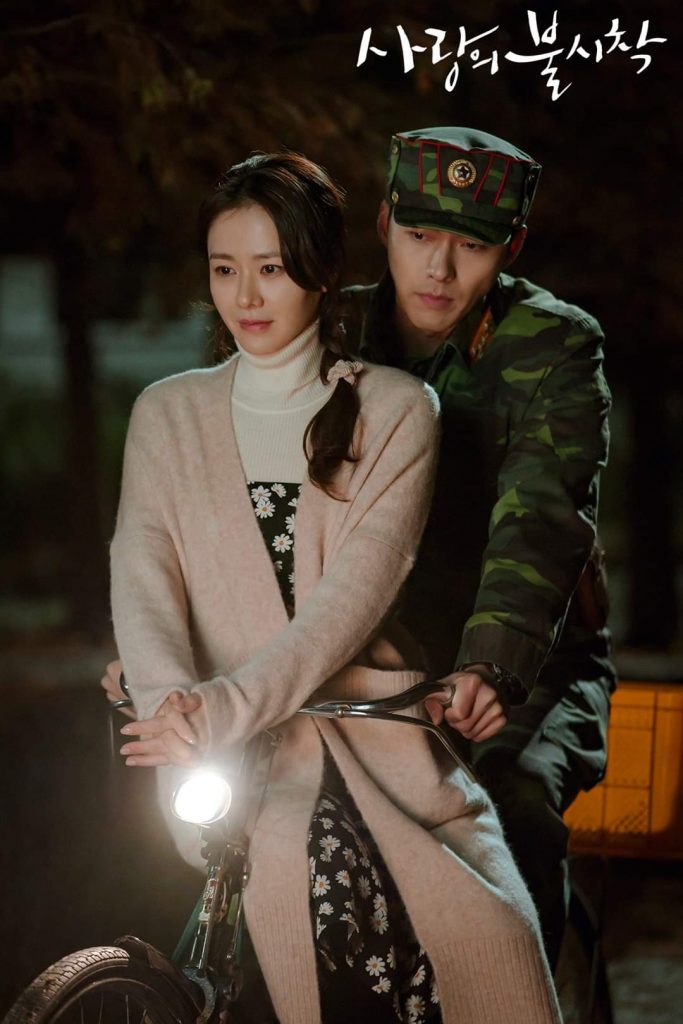 While Jung Hyeok and Se Ri haven’t realized they are slowly falling for each other. Us, the viewers, had already connected the romantic clues together.

Using Jung Hyeok’s money, Se Ri splurges on buying food on board a train going to Pyeongyang. Unfortunately, the train was forced to stop so they had to do an instant camping outside until it is fixed.

A warm blanket and bonfire plus Jung Hyeok’s warm and broad shoulder created a new meaning of camping scene that any girl would dream to have. 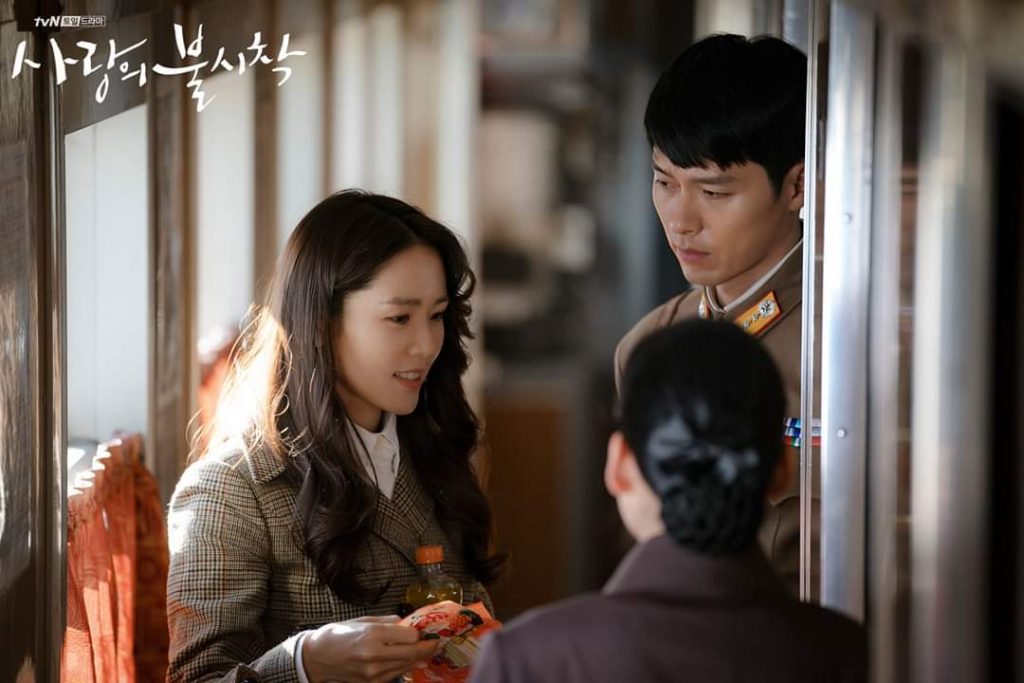 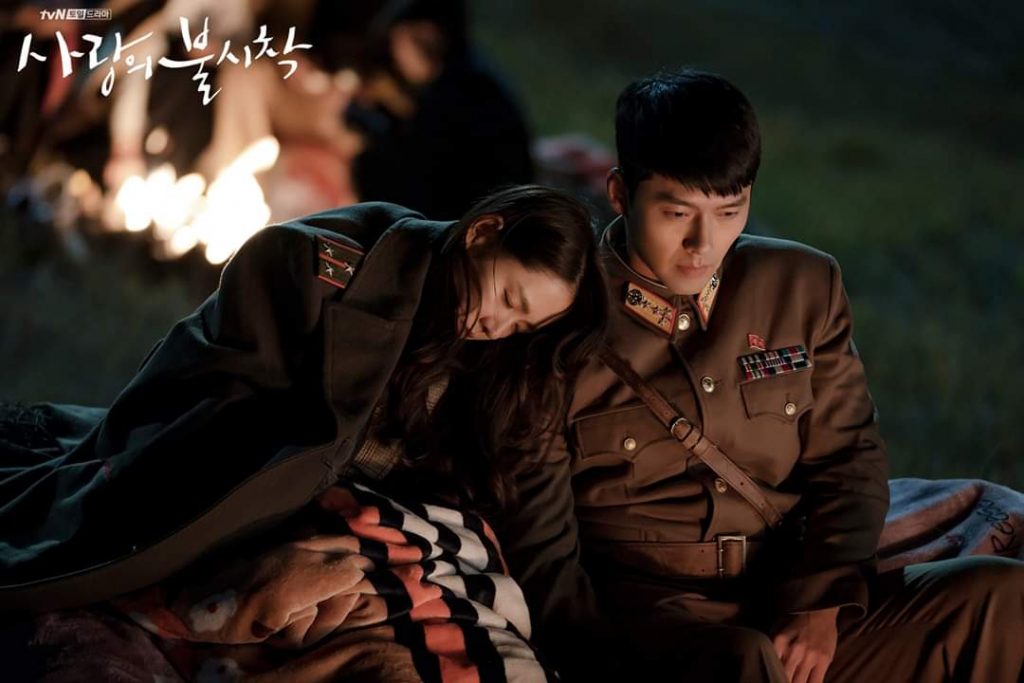 A melody stuck in her head has had Se Ri often ask people who know music if they are familiar with it. Finally, she heard it from the exact person who created the melody that changed her life for the better. 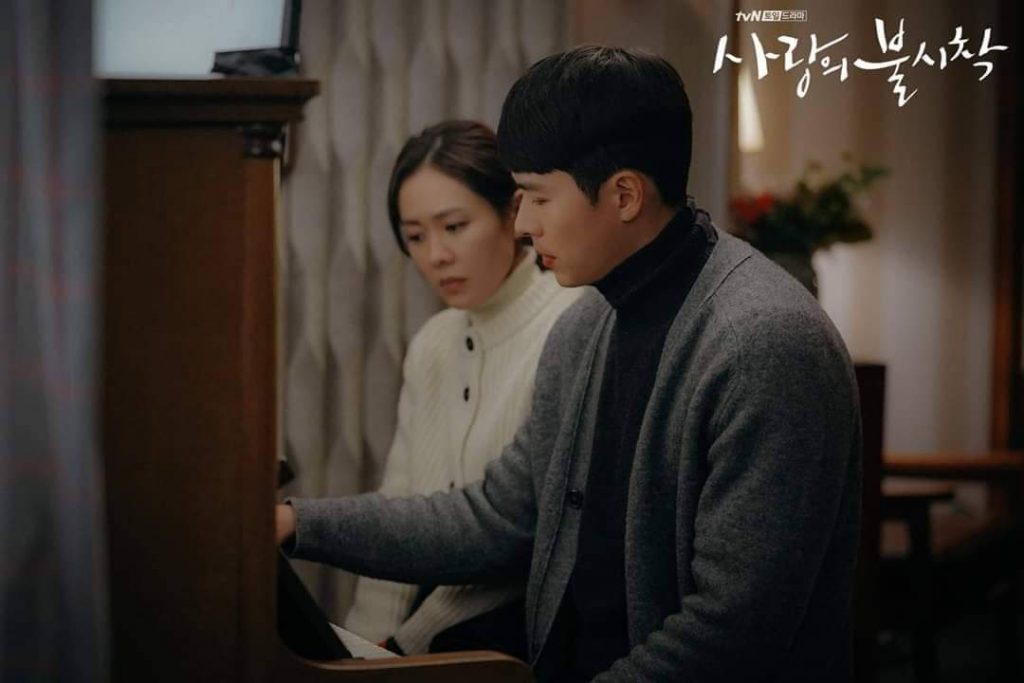 I’ve been looking for you scene

The busy street, the faint snow falling and the two love birds separated by Korean border made our hearts pit-a-pat in this moment.

For her birthday, Jung Hyeok surprise Se Ri with a gift which made us beam. Se Ri forces to get the gift which turned out to be a ring. Thinking the size does not match, we had an awww moment when Jung Hyeok revealed it to be a “couple ring”.

Planning our future together scene

Planning how many kids to have with Jung Hyeok is just a goal-setting activity women would love to partake. 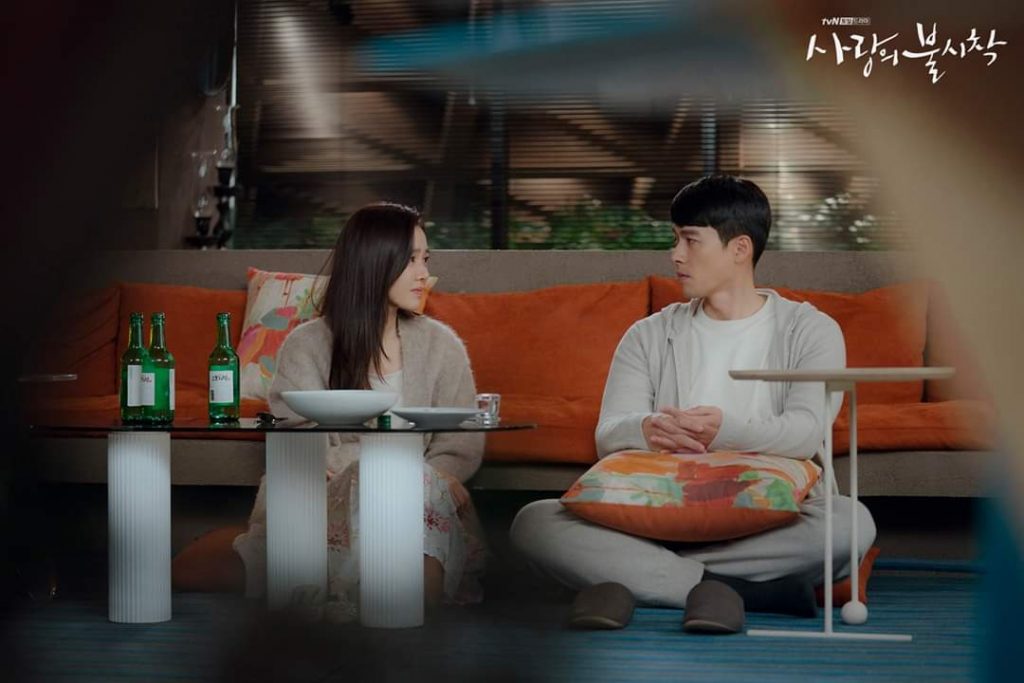 Charming the audience with his subconscious way of protecting and caring for Se Ri, Hyun Bin as Jung Hyeok gifted us with the boyfriend we want to have in real life. To the extent of even accepting new life in North Korea. *wink

The perfect definition of Cloud Nine. No elaboration needed.

In the first attempt to sneak Se Ri out of North Korea, the boat route put her and Jung Hyeok in a risky situation. And because love conquers all, they escape the situation with an impromptu kiss.

The swoon inducing Hyun Bin in slow motion riding a motorbike scene is one of the best moments in K-Dramaland this year. *wink

By this time in the story, Se Ri and Jung Hyeok have come to terms that love is full blown for both of them. What better way to seal it but with a heart-stopping kiss.

Snow Falling In The Forest Scene

Afraid she might aggravate Jung Hyeok’s situation, Se Ri tried to push him away – but to no avail.

Finally securing a safe route for Se Ri to return, this moment broke our hearts yet warmed us up big time.

Back Hug On Seri’s Birthday Scene

Finding love and warmth with someone unexpectedly makes the love between Se Ri and Jung Hyeok worth it.

I have so many scars scene

Accommodating to her boyfriend’s “exhibit of scars” scene, we can’t help but truthfully hope for a full top take-off from Jung Hyuk. But, a glimpse is sweet just the same.

Lastly, who would forget this heartbreaking scene?

Crash Landing on You marks its finale on February 16. If you have not caught up with it yet, you can watch it on Netflix.

BONUS: Behind The Scenes