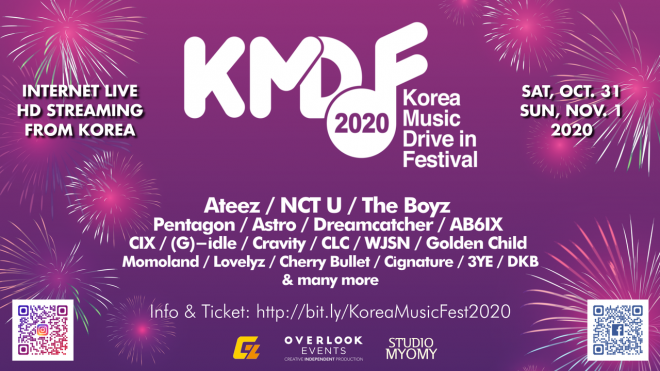 KMDF 2020: All The Artists To Light Up The “Korean Music Drive-In Festival”

The Korean Music Drive-In Festival, or simply KMDF 2020 is upon us this Saturday and Sunday. Let’s take a look at the performers’ line-up that will take over the stage during the weekend for a new mesmerizing and memorable experience. 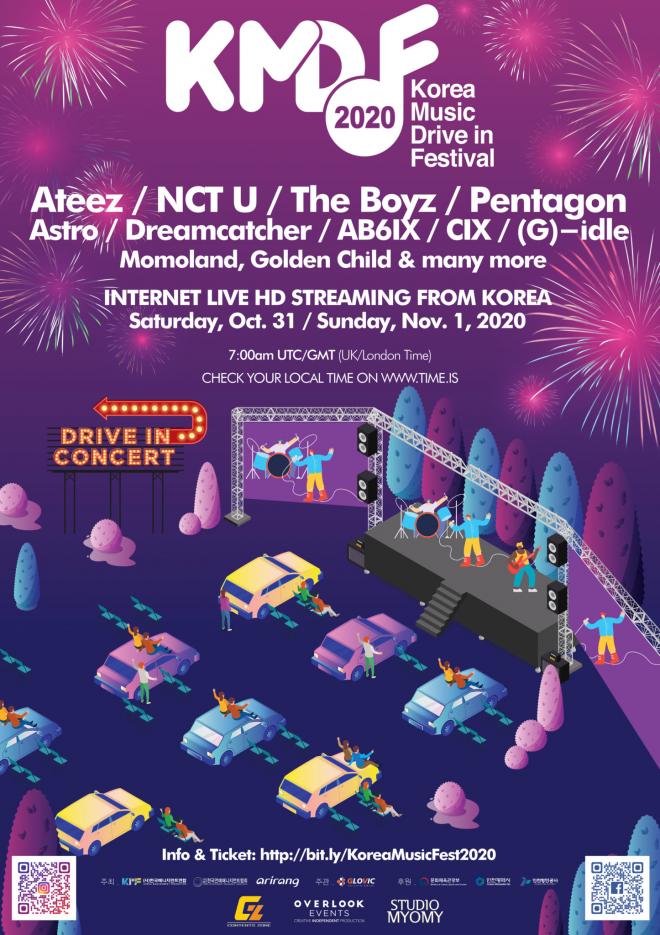 The KMDF will be presenting a unique two-day event. During this year, a lot of physical concerts became cancelled or postponed, making this a rare opportunity for South Korean fans to see a lot of the artists they like in person, all while being in the comfort of their cars.

In addition, Overlook-Events is making this show possible for streaming for international fans in many locations outside of Korea. If your country is one of those, make sure to grab your tickets and get ready for an unforgettable ride this weekend!

On the first day of the concert, fans will be entertained with the performances from more than 30 artists. A lot of big names in K-Pop are joining this event to deliver quality stages for all attendees and streamers.

Global phenomenon boy group ATEEZ is one of the performers for the day. The group just last week celebrated its second year anniversary since its debut, commemorating it with an online concert. The idols have been breaking a lot of their own records and setting milestones along the way, impressing global fans and proving their popularity.

We get a group from SM Entertainment, NCT U. They are the first sub-unit of NCT. The group’s lineup changes for every comeback, meaning we are in for a surprise at which members will perform during the concert.

The boys from ASTRO are also part of the line-up for Saturday. They made a comeback back in May with a new mini-album and later on, debuted their first unit consisting of members Moonbin and Sanha.

AB6IX will also be making an appearance. They are a four  member boy group which debuted in 2019. Three of the members participated in the survival show Produce 101 Season 2, with two of them making it into the final line-up. The group returned with VIVID in June and are currently on the verge of dropping another extended play titled Salute.

The winners of Road To Kingdom will also be gracing the stage with their stunning performances. The Boyz are ready to take on the spotlight and present their own style to all the viewers. Their latest comeback was in September with Chase and “The Stealer” serving as the main track.

Fans of Woollim family can rejoice because four of the company’s groups will be attending the event. Golden Child and Lovelyz both recently made impressive comebacks and held their own successful online concerts. The two group have been gaining more popularity, especially during their latest music releases.

Rocket Punch will be joining as well and showing their lively charms. The girls made two comebacks this year with Red Punch and Blue Punch. In addition, the newly debuted group DRIPPIN will also be making their appearance alongside the other artists. Their first album Boyager was unveiled on October 28.

Cube entertainment will also be sending a couple of its groups to the front line. Pentagon, (G)I-DLE and CLC will all delight with their marvelous performances, while stealing the hearts of the audience. In particular, Pentagon recently grabbed its very first win on a music show with their new song “Daisy”. Meanwhile, CLC made a strong comeback in September with “Helicopter” and (G)I-DLE is preparing for its online fan meeting in November.

The six-member girl group Momoland are also attending. The members went through a few changes, with some new additions and departures until coming to the current lineup. Back in June they shared the special album Starry Night, with the main song under the same name.

CIX just made a comeback on October 27 with the third extended play Hello Chapter 3. Hello, Strange Time and “Jungle” serving as its main track.

Fans will be able to enjoy the beautiful vocals of Kim Jaehwan as well. He was previously part of the project group Wanna One which was formed from the 11 winners of Produce 101 Season 2. The singer made his solo debut in May 2019.

The beautiful ladies from WJSN will be presenting their mysterious and dreamy sound in KMDF too. The rookie boy group Cravity will be performing as well. They already stole many fans’ hearts through their music. Both groups will be showcasing outstanding stages that should not be missed.

Also in the line-up are the seven members of Cherry Bullet who released a summery digital single “Aloha Oe” in August. They showcased their cute and playful side for this track. Then we have the rapper and singer Giant Pink, who made her solo debut in 2018.

The talented Dreamcatcher will be taking over and delivering their unique sound to KMDF. The girls made a spectacular comeback with their latest album Dystopia: Lose Myself and the main track “BOCA”, staying true to their own colors.

More rookie groups are seen on the line-up such as Cignature and DKB. Both of them debuted in early February 2020. The girls from Cignature include 7 members, sharing catchy music throughout the year. Meanwhile, DKB have been impressively presenting a variety of songs in all their mini-albums so far.

The stunning 3YE is ready to showcase its powerful sound during the concert. Consisting of three members, the group poured its talent into their performances and released their first extended play back in June.

The duo B.O.Y previously had its members participate in Produce X 101, although neither made it to the final line-up. They made their official debut in January and have so far released two mini-albums, showcasing clear vocals and performances.

More interesting acts will be attending KMDF. One of them is No Brain, a South Korean punk rock band widely considered one of the godfathers of the Korean punk scene. The group formed in 1996 and is part of the first generation of indie bands in Korea.

The alternative pop band LEENALCHI takes the name of a pansori singer from the Joseon Dynasty, who created music that let people dance along to it.  Park Moonchi, a singer-songwriter and composer made her solo debut in 2017 under her real name, later on changing it into her current stage name.

Korean indie band ADOY is an electronic rock band from Seoul, formed in early 2016. They quickly rose through the ranks, becoming one of the groups to keep an eye on in the indie scene.

Music lovers will be able to enjoy another rock band’s sound, Galaxy Express. The trio is known for its energetic stage presence. They formed in 2006 and debuted in 2007. Also part of the first day line-up are CHIYOONHAE and Round 30.

The second day of KMDF will include a lot of fascinating artists as well. One of the well known names on the list is DJ DOC, a hip hop trio that has been around for years. Another recognizable artist is the queen of ballads, Baek Ji Young. Her emotional voice captivates listeners by delivering the feelings of the songs perfectly.

Day 2 will also include singer Jongyup, the leader of Brown Eyed Soul, who made his solo debut in 2008,. Also KMDF will include The One, a singer and vocal coach, the stunning vocals of Park Kiyoung and the strong voice of Park Jaejung.

Continuing on with the stellar set list, singer, songwriter and producer Gaho will also be performing on the stage. One of his most famous tracks is “Start Over” which is also the soundtrack for JTBC’s drama Itaewon Class.