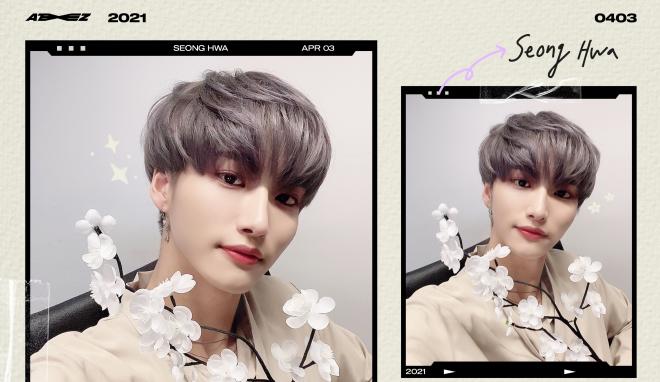 #OUR_STAR_SEONGHWADAY: Celebrating ATEEZ’s Park Seonghwa And His Many Moments Of Radiance

ATEEZ’s all-rounder ace, Seonghwa, celebrates his birthday today. To commemorate, we highlight his endless range of talents that make him one of the most shining stars of the industry!

ATEEZ’s Park Seonghwa celebrates his birthday today! The artist is known for his soft-spoken ways and unwavering gentle kindness. Seonghwa also competes with his younger members as one of the goofiest of the group. Meanwhile, on stage, the artist completely transforms into a captivating performer, demanding the audience’s attention until the performance’s very end.

His enigmatic appeal and ace talents remain unrivalled. As such, Seonghwa is arguably one of the most powerful performers emerging in the K-Pop scene.

As the meaning of his name states, Seonghwa was “born to be a star”, and a star he is. On his birthday, we celebrate all of his radiant qualities that bring light everywhere he goes.

Perhaps one of Seonghwa’s most unique aspects as a performer is his unmatched expressions on stage. The artist embodies each track with impeccable dance skills that are envy-worthy by anyone who watches. However, he elevates each performance by communicating the song’s sentiment and mood perfectly, through his facial expressions alone.

What is most impressive about this is the risk he takes on stage to deliver them accurately, and the clear practice behind-the-scenes that it takes to succeed. During “HALA HALA”, he portrays the fierce and demonic qualities of the title track through sharp gazes and sinister smiles.

Similarly, during “WONDERLAND” and specifically its Halloween stage, Seonghwa is unafraid to embrace a frightening persona. His willingness to push the boundaries of image perfection, and enhance the artistic act of performance is remarkable. Though ATEEZ’s rich discography and intense choreography already establish the foundations for stunning performances, the artist’s expressions only make them even more captivating.

Fans can witness the effectiveness and significance of facial expressions during ATEEZ’s stage at the 2020 SBS Music Awards. First performing “To The Beat” with confidence and a pointed gaze, Seonghwa soon transitions into a more playful performance of “THANXX”, illustrating his wide range. The performance is a true testament to the idea that stages are more impactful when artists are clearly enjoying themselves to the fullest.

One of the stages highlighting Seonghwa’s performing strength is ATEEZ’s “Inception”. The group’s first love song discusses yearning for a loved lost one. The group croons about feeling stuck in a dream-like state where they are constantly searching for them. This stage was the perfect opportunity for Seonghwa to depict his more sentimental capabilities, communicating the longing of the lyrics flawlessly.

Incredible Vocals (and even rapping)!

While it’s clear Seonghwa has perfected his dancing and stage presence, the artist has the vocal strengths to match.

Often boasting his strong voice in the bridges or the choruses of ATEEZ’s music, Seonghwa shows impressive skill through a series of higher and lower notes. “Answer” displays his higher register in its memorable pre-chorus, before showcasing his vocal power in its booming chorus.

The fan-dedicated “Star 1117” illustrates Seonghwa’s vocal capabilities well in the slower ballad. With a mix of higher notes and lower tones, the artist shows his wide vocal scope. Furthermore, the whimsical track draws attention to the warmer, soothing qualities of his voice perfectly.

Seonghwa’s capabilities as a vocalist are admirable, but another trait that cannot be unmentioned is his remarkable stability. As ATEEZ delivers some of the most challenging choreographies in K-Pop, the artist’s consistency in providing stable and clear vocals enhance the stage, making the difficult dance routines seem effortless.

Moreover, one of Seonghwa’s most notable vocal qualities is his immense versatility. While the artist originally auditioned as a rapper at KQ Entertainment, fans have not seen much of his rapping until recently, when the artist showed off his talents at the 2020 SBS Gayo Daejeon. His commanding rap verse during ATEEZ’s cover of “GANG” exemplifies his capabilities to embody both vocalist and rapper.

Additionally, Seonghwa depicts his charisma as a rapper in ATEEZ’s recent track “The Leaders”. Alongside his entire team for the rap track, Seonghwa embodies the attitude of the song, pushing the chorus further with grit and power.

Despite his intensity and power on stage, Seonghwa radiates a gentle kindness off stage. As such, his duality often endears his fans and is a quality that catches the attention of many.

Shortly after debuting, ATEEZ featured in a hidden camera prank video with Dingo. During the heart-warming scene, Seonghwa came to the aid of what seemed like a scared lost child, not realizing the prank occurring. Regardless, the artist displayed his benevolent heart and patience throughout the entire situation, a true demonstration of the person he is.

Moreover, despite being the eldest member, Seonghwa shares a fond playfulness with the younger members. Rather than exercising strict authority as the eldest, the artist shows his goofier sides with ATEEZ, creating an atmosphere of loving camaraderie as their bond resembles that of siblings rather than just groupmates. 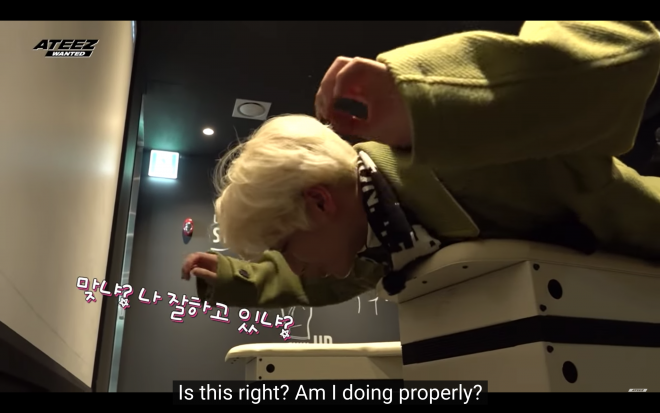 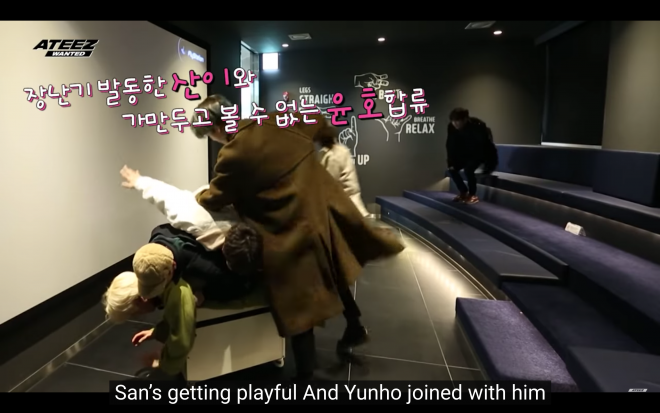 Meanwhile, his considerate nature extends to ATEEZ’s devoted fandom, ATINY. The artist expresses himself openly, often providing fans with advice or words of comfort. When a fan faced the relatable issue of changing their mind about a previous life dream, Seonghwa’s gentle words of encouragement resonated in the hearts of many. 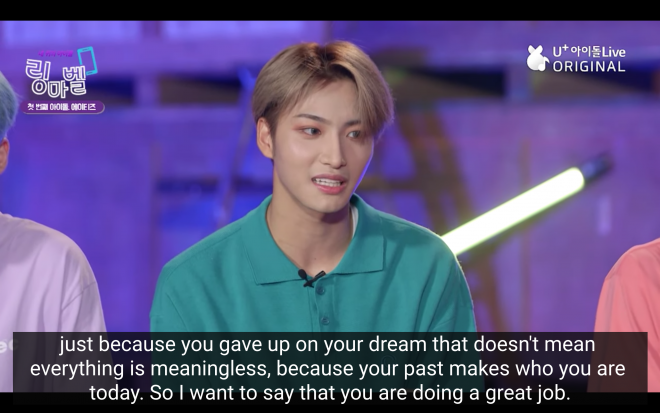 Furthermore, on his birthday last year, Seonghwa gifted his fans for their ongoing support. In a sweetly penned handwritten letter, the artist expressed gratitude for fans’ love and for inspiring him during his journey. After posting, he read the letter aloud during his MARS ASMR YouTube series. 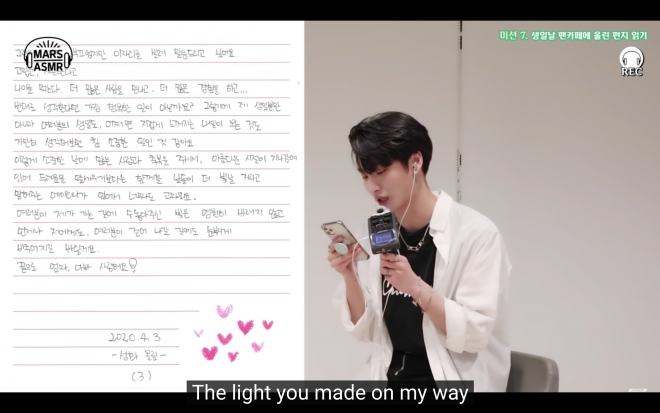 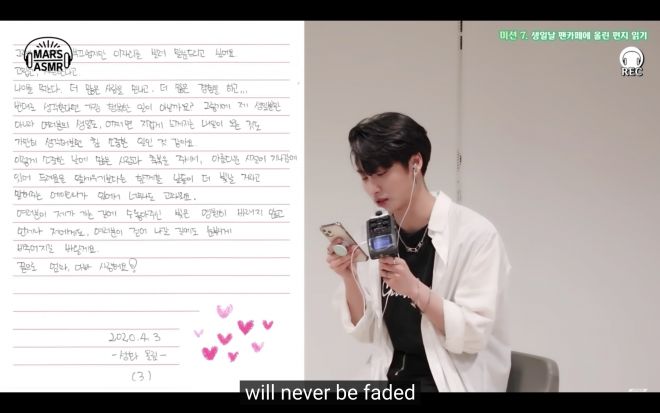 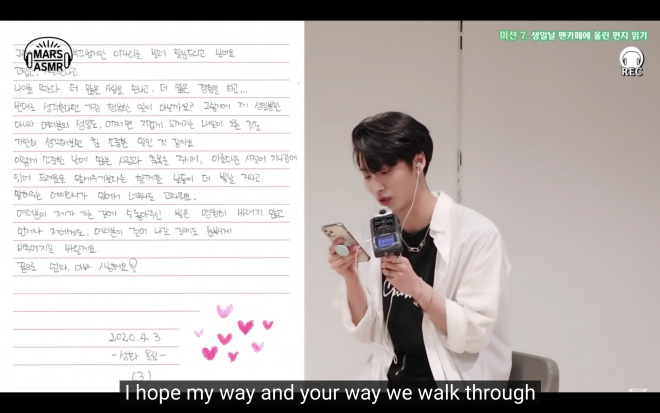 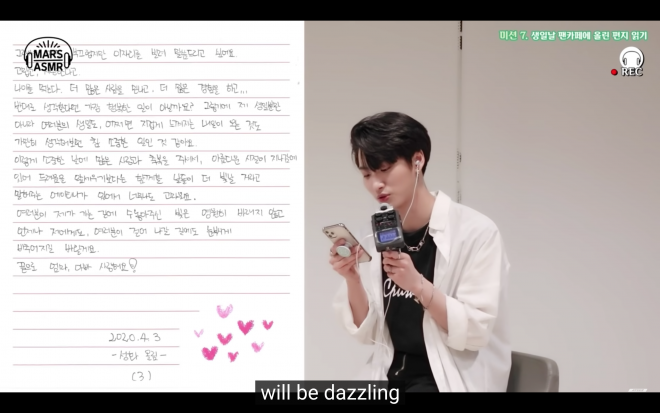 As Seonghwa concluded in his birthday letter last year, “I hope my way and your way we walk through will be dazzling”. If the success of ATEEZ and the ongoing support from loving ATINYs can be any indication of the path ahead, the road Seonghwa walks with his team and fans will be brighter than anything.

Meanwhile, fans can keep up with ATEEZ on Mnet’s Kingdom.