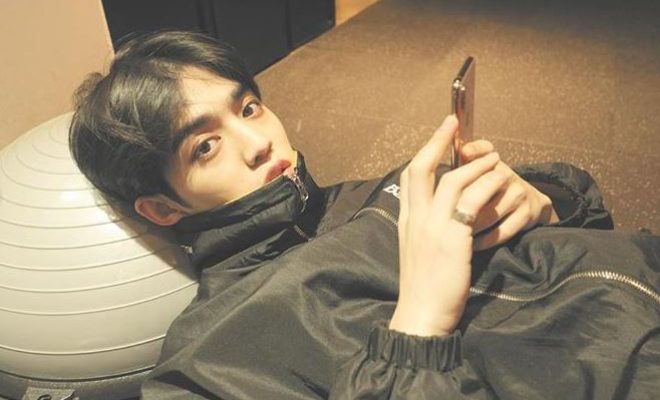 S.Coups Proves He Is The Biggest And Cutest SEVENTEEN Fan In Latest Instagram Update

After giving fans big laughs and warming their hearts with his ticket-buying adventure, the general leader of SEVENTEEN, S.Coups, once again showcased he is the biggest (and cutest) fan boy of his group in his latest Instagram post.

The rapper, who recently opened a public account on the photo and video-sharing site, posted a series of photographs, showing off his excitement to meet SEVENTEEN on G+Star Zone, a Hallyu-themed cultural space inside the Apgujeong Rodeo Station.

In the photos captioned “It was nice to meet SEVENTEEN”, S.Coups beams widely while posing with Jeonghan and Wonwoo in front of a huge photograph of the boy group, and while passing by a huge LED screen where a video of the boys was playing.

Fans found the leader of the boy group “cute” and “adorable”. Many also noticed how contagious his big smiles are. A lot of fans also acknowledged that he is indeed the “biggest Carat” and the boys’ “number one fan”.

The G+Star Zone is located at Apgujeong Rodeo Station, B1 Level, 402 Apgujeong-ro, Gangnam-gu, Seoul. According to visitseoul.net, the Hallyu-themed cultural space debuts new content every year, which features new subjects each time. At the area, visitors can take selfies with the celebrities’ life-sized cutouts. Visitors can also donate money if they wish, which will in turn be donated to the underprivileged.

Hellokpop, as an independent Korean entertainment news website (without influence from any agency or corporation), we need your support! If you have enjoyed our work, consider to support us with a one-time or recurring donation from as low as US$5 to keep our site going! Donate securely below via Stripe, Paypal, Apple Pay or Google Wallet.
FacebookTwitter
SubscribeGoogleWhatsappPinterestDiggRedditStumbleuponVkWeiboPocketTumblrMailMeneameOdnoklassniki
Related Itemss.coupsSeventeen
← Previous Story MAMAMOO Showcases Unique Teamwork In “Q! My Dance”
Next Story → EXO’s Lay Zhang And Diplo Meet Up And Get Close In Photos Together