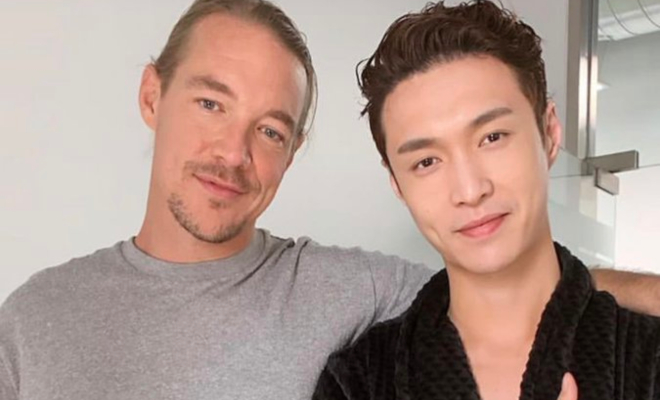 Are we getting a Diplo X Lay Zhang soon?

After shaking hands with Pharrell Williams during the amfAR Gala Hong Kong 2019 on March 25, EXO’s Lay Zhang continues to broaden his connections as he poses for a photo with American DJ and record producer Diplo.

The American DJ behind the hits “Be Right There” and “Revolution” updated his Instagram story with a friendly photo with the singer-songwriter. In the photo, Diplo was sporting a casual grey shirt with his arm around the “Namanana” singer’s shoulder. Meanwhile, the EXO member was comfortable in a black robe, giving a thumbs up pose to the camera.

diplo updated his instagram story with a picture of him and yixing! @layzhang x @diplo pic.twitter.com/Ruqmbijh20

Lay Zhang then returned the gesture by updating his social media channels with a photo with Diplo, as well.

He wrote, “It was great meeting you.”

It was great meeting you @diplo ? pic.twitter.com/8z24mm1n99

Fans expressed shock over the interaction, while others started speculating that a collaboration may be in the works. However, nothing concrete has been announced by either parties.

Still, fans are hopeful that the meeting will bear fruit to a song especially since Lay Zhang has been teaming up with other artists in the past months.

Early this year, he shared the stage with Steve Aoki for a performance of “Shakalaka”. He also participated in the Michael Jackson tribute single titled “Let’s Shut Up and Dance“, together with Jason Derulo and NCT 127. Most recently, the singer-songwriter collaborated with Far East Movement for “Lovebird“.

Prior to these collaborations, the EXO member released a new version of his hit song “Sheep” which he worked on with Alan Walker.