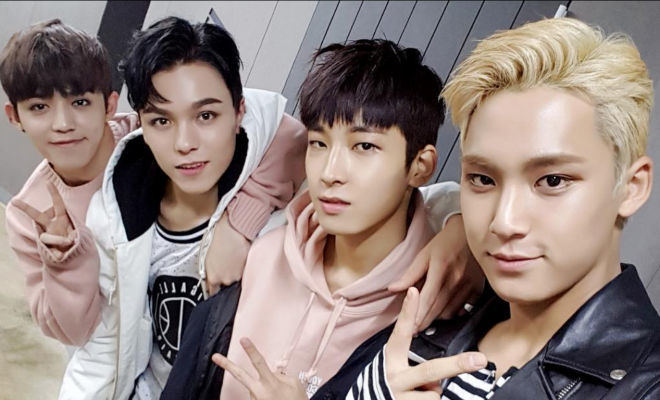 SEVENTEEN are too adorable!

Korean boy group SEVENTEEN‘s hip-hop unit took time out of their busy schedule to go on a trip in their recent V Live broadcast of ‘Where is my friend’s hometown?’.

Dubbed as a “healing drive”, Mingyu prepared a schedule for his unit co-members to comfortably rest up and be healed. He led the hip-hop team’s adventure around his hometown, Anyang. However, Mingyu admitted that despite Anyang is his hometown, he has not gone around the area often in the past six years due to his training and schedule.

“A long time ago, there were only mountains, but now it has a cafe town,” remarked the idol on the changes in Anyang. Vernon, Wonwoo, S.Coups, and Mingyu drove around the area, while jamming to other idols’ songs.

The four idols don on their groove jamming to Zico‘s Boys and Girls, BIGBANG‘s FXXT IT, and Last Dance, BLACKPINK‘s Whistle, among others.

The members turned nostalgic as they reminisced their trainee days. “We used to go down this street a lot, but time has passed, a fellow member got his license, and is driving down this same road,” said leader S.Coups.  “It feels really new,” added Vernon.

S.Coups also looked back on his early days in Seoul. The idol, from Daegu, said it was only after turning 20 that he got used to Seoul. “I couldn’t memorize the streets, but now I feel a bit comfortable with them,” he added.

The quartet enjoyed duck meat and samgyupsal in a restaurant that Mingyu used to visit with  his parents, grandmother, and younger sibling. “We ate to our heart’s content and then, we’d take a walk by the nearby lake,” he recounted.

For dessert, the hip-hop team went to a cafe run by the mother of MONSTA X‘s Wonho. They also visited the shooting site of the popular Korean drama, ‘Goblin’.

According to Mingyu, S.Coups is an avid viewer of the series. “He know all the lines too,” he said. SEVENTEEN’s leader proceeded to show off his love for ‘Goblin’ by delivering a line from it.

The team did not let the opportunity pass to parody a scene from the drama. Vernon did an imitation of actress Kim Go Eun‘s character Ji Eun Tak. He lighted and blew off a match, which is a way to summon Gong Yoo‘s character Dokkaebi. But instead of the actor, Wonwoo, Mingyu and S.Coups appeared.

S.Coups and Mingyu also did a bonus parody of the drama by channeling their inner Goblin and Grim Reaper. “If I may dare, I want to try acting out Kim Go Eun’s role,” Vernon said, and gave a snippet of his take on the role.

The members then proceeded to the cafe and scored guide Mingyu. They seemed to enjoy teasing Mingyu as S.Coups and Wonwoo jokingly gave him 3.0 and 0.025 as rate.

“I’m going to erase Changwon out of my head,” Mingyu joked after hearing Wonwoo’s rating. Changwon is Wonwoo’s hometown.

Vernon was extremely generous as he gave out a perfect grade of 10.

94
SHARES
FacebookTwitter
SubscribeGoogleWhatsappPinterestDiggRedditStumbleuponVkWeiboPocketTumblrMailMeneameOdnoklassniki
Related ItemsBigbangblackpinkgoblinMingyuSCoupsSeventeenvernonWhere's my friend's hometownWonwooZico
← Previous Story TWICE ‘Knock Knock’ To New Record, One After Another
Next Story → Highlight’s Kikwang And Dongwoon On Leaving Cube: “Let Other Singers Know That They Have A Choice Like We Did”