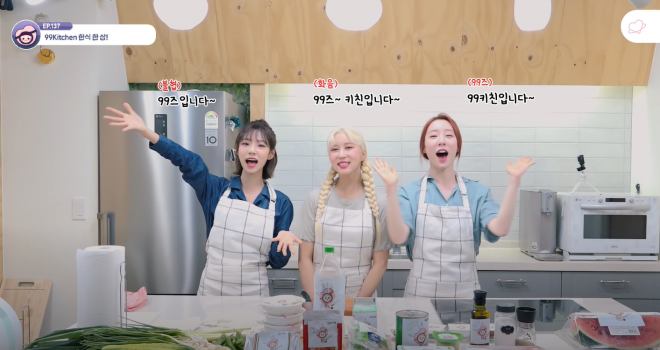 Yeoreum, Dayoung and Yeonjung from girl group WJSN opened 99 Kitchen with deliciously looking table, filled with Korean food. The episode was part of WJSN’s self-made content UZZU TAPE, which can be found on the official YouTube and Naver V Live channels.

In the released video, the three members popped out with an energetic greeting, announcing their return with the second episode of 99 Kitchen They then divided into roles, with Yeoreum and Yeonjung being the main chefs, and Dayoung as the assistant chef. They revealed their goal was to prepare Korean food to fill their table with.

The three began cooking in earnest, revealing muksabal, stir-fried spicy pork and fruit salad to enter the menu. The members showed off their cooking skills and techniques in the kitchen, impressing their viewers in this fun time. Unlike the first episode of 99 Kitchen where the girls suffered from the bitter taste of failure, this one turned out to be more successful.

“It’s the best stir-fried spicy pork I’ve ever had in my life”, said Dayoung, expressing her high praise of the final food. Meanwhile, Yeonjung commented, “If the response is good, we’ll come back with the third episode.”

The three girls worked hard as part of WJSN’s comeback back in March with the mini album UNNATURAL. The contrast from their mature charm with this bubbly side is truly fun to see, proving the girls have a lot to offer as both, artists and people.

Meanwhile, WJSN, who made fans laugh with their chemistry, will continue to share various contents through its official social media channels.