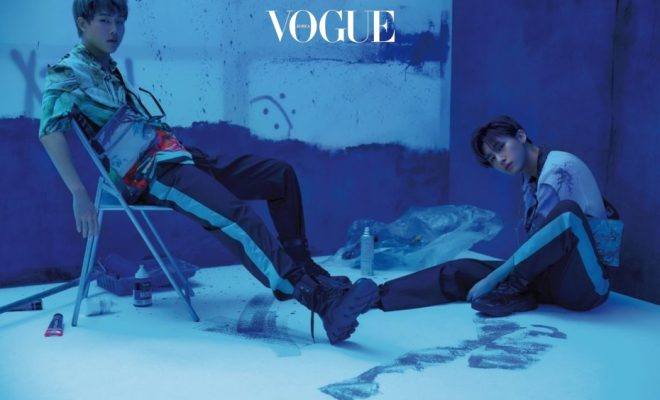 Like their facets as artists, MONSTA X’s maknae liners Joohoney and I.M have multiple colours that bring a dazzling allure.

Blue is indeed the colour for calm. However, that’s something our hearts can’t do after looking at the striking and captivating photos of MONSTA X’s Joohoney and I.M for the June 2020 issue of Vogue Korea. 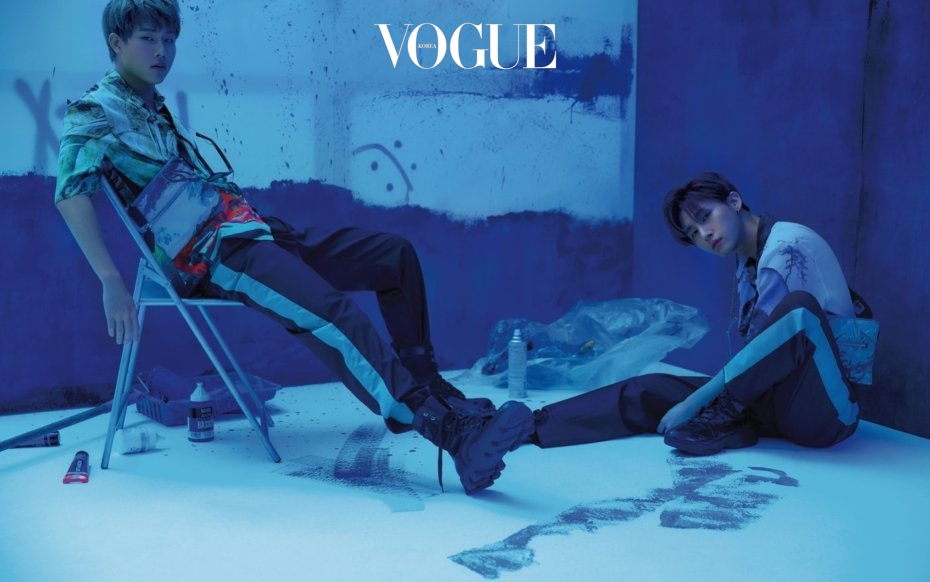 The two MONSTA X members coloured the pages of the fashion magazine with their dazzling charms. Along with their powerful and steely gazes, the rap duo drew attention with their natural allure.

Despite being their group’s youngest members, Joohoney and I.M also showed their maturity through their in-depth and thoughtful Vogue interview. 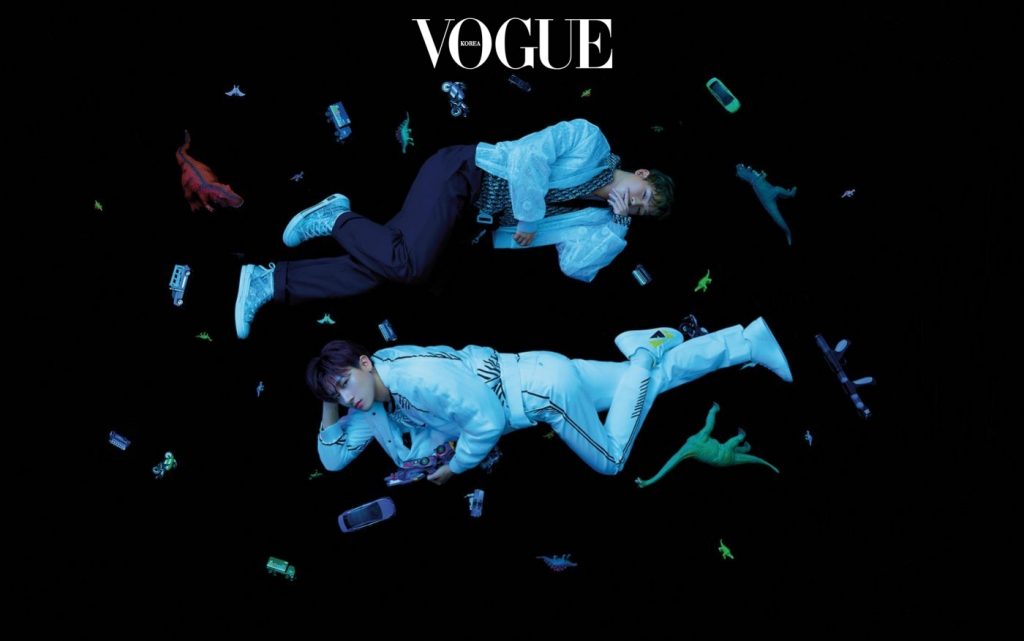 I.M and his music

Keeping a strong sense of their selves is a denominator often found in common among idol group members who make their own music. And the same goes for I.M, whose tone becomes clear when he talks about music.

He has shown his production skills through MONSTA X’s albums and his personal mixtapes. In fact, he participated not just in the rap making of all the songs for MONSTA X’s new mini-album FANTASIA X but also in composing the song “ZONE.”

“Putting it simply, ‘I’m the crazy person in this zone, I’m the best” is the theme of this song. I made it with the crew Code Chameleon who I work with. It’s an exciting song for the fans to listen to during concerts,” the young rapper shared.

Changkyun, as we all know him, also said that hitting number one is not what they expect from this album. Instead, what they wish is for others to appreciate their new attempts in terms of the music and performances that they are presenting, since they paid a lot of attention to it.

In line with their successful activities in the U.S with the album All About Luv, the rapper shared his honest thoughts about what made their rise sweeter.

Having been very vocal about his support to K-Pop as a whole even in the past, he said, “It’s more meaningful to be able to promote K-Pop to other people rather than garnering [good] results or achievements.”

“I learned a lot while preparing for the album. The United States places great importance on the “feel”, and we tried to keep that alive with the same beat and rhythm. I think I also grew as a vocalist because I did more singing in songs here compared to our Korean albums,” the MONSTA X member also noted. 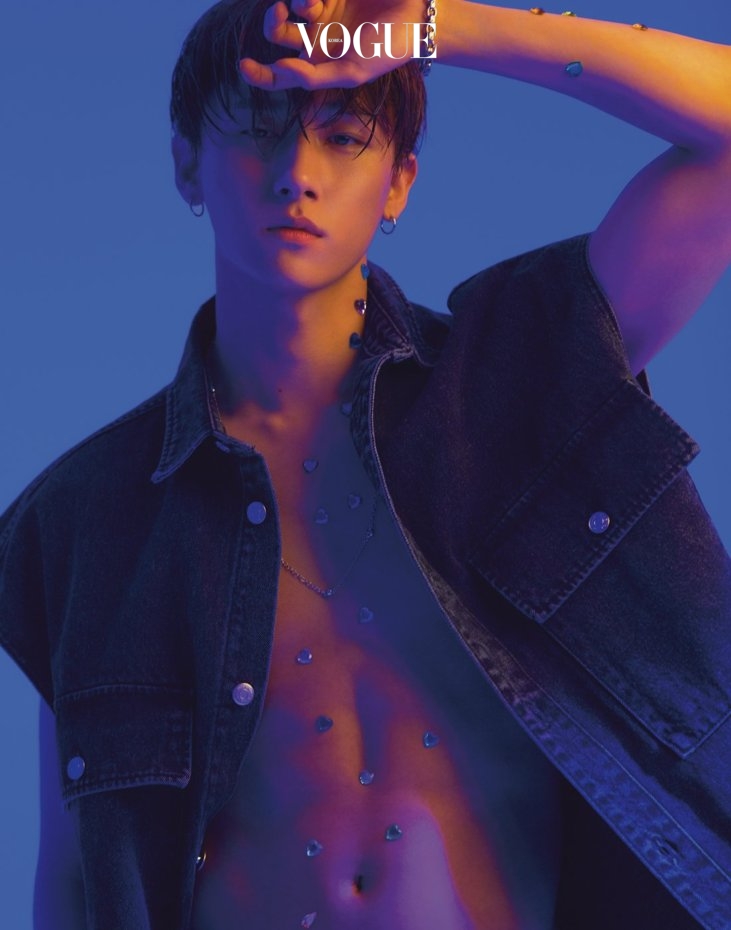 Although he is the youngest member of the team by age, I.M has led MONSTA X in their global activities. This is due to his strong skills in communicating through the English language, as brought by his multi-cultural exposure after leaving Korea at a young age and living in Israel for four years and Boston in the U.S for three years.

“The first language I learned was English. I didn’t learn Korean until I entered elementary school. Because of that, people say that my pronunciation is good, but despite this, I haven’t stopped studying English too. When I watch American dramas, I turn the subtitles on and off repeatedly. I have a big responsibility to speak English as the team’s representative,” he said. 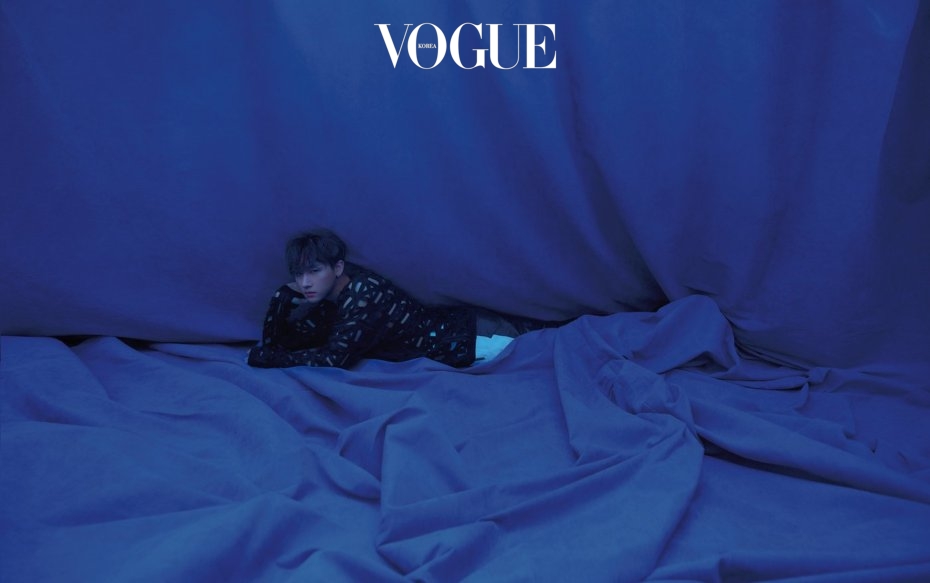 Among the standout reviews during their promotions in the U.S was being lined up next to iconic boy groups such as Backstreet Boys, N Sync, and New Kids on the Block.

“We are grateful to those who said that our concert stage’s tireless stamina and performance resemble each other,” I.M gushed. This may be a bit surprising, as the young rapper was born on the year that Backstreet Boys.

However, he explained, “My father loved music. I woke up listening to jazz, classical, and old pop in the morning. Thanks to him, I’m familiar with old songs and different genres.”

This is proven by the variety on his playlist, which includes the OST to Howl’s Moving Castle titled “Merry-Go-Round of Life” by Joe Hisaishi. Kenny G’s saxophone performance album and Nora Jones’ album are also part of his well-rounded selection.

Additionally, he is especially hooked on songs from Trevor Daniel. “His songs, including “OMG”, are very similar to my music preferences. If I have a chance, I’d like to work with him,” the rapper said. 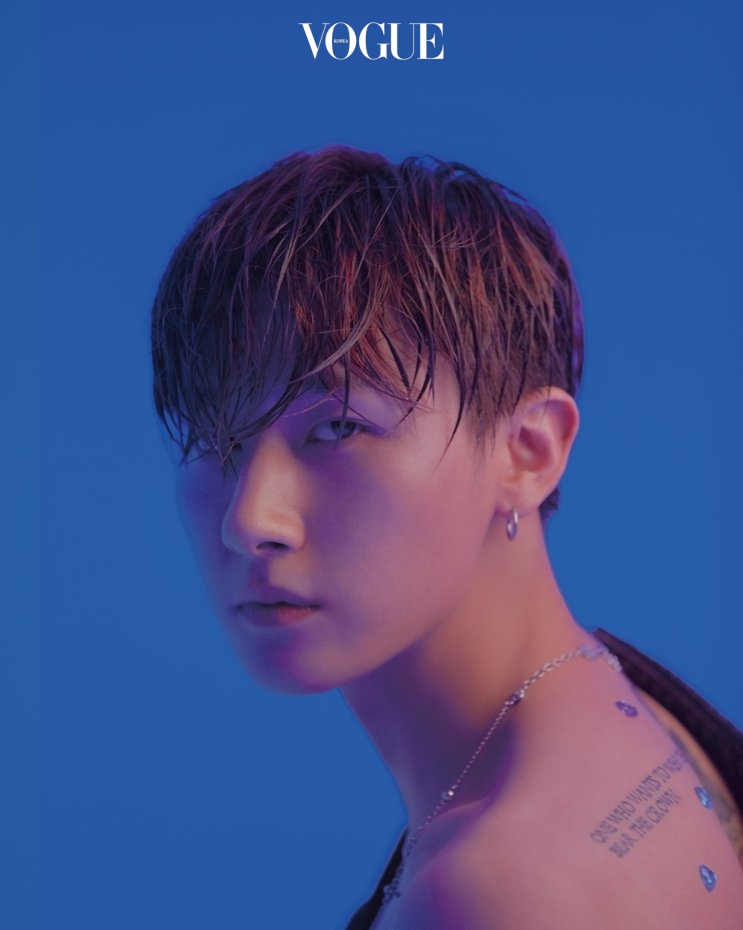 Aside from creating music for MONSTA X, I.M. has been releasing his own mixtape as well.

“When I make my album, I become more honest with it. It doesn’t mean that I’m lying when making popular music—rather, it makes me talk about my innermost thoughts and become more like “I.M”. [This is also because] team activities sometimes require compromise to balance the overall color,” he shared.

For the rapper, working on music is what he considers as his break. “Even when I’m hanging out with my friends, I run to the studio saying, “This is not the time for me to be like this”. We have lots of work to do usually, so I don’t want to spend my time blankly. Even if it’s a rest day, I feel at ease when I go to the studio. If it isn’t working well, I try to find and listen to good music,” he said.

I.M also shared that he tries many things to be inspired. “I change the color of the lights, which I got at a high price, according to the songs I make. I always take notes of the things that come to my mind, and I drink alcohol to bring down my gloomy feelings as well,” he said.

These days, the rapper also shared that he’s been thinking of having a different hobby. “I want to do Muay Thai or martial arts, or take a perfuming class. I dream of having a perfume brand with the logo being my arm’s tattoo,” he said, pertaining to his tattoo which bears a face that becomes a smiley or sad face depending on the direction you look.

Although I.M. looks solid, conducting activities in the entertainment industry where you are always under the scrutiny of others is still not easy.

“Being an idol is not an easy job. In the beginning, I was so conscious of other people’s views which is why I was confused about who I was. Suddenly, I decided not to be just the one “I.M” that others wanted and instead admit that I have different sides which vary from situation to situation every moment,” he said. 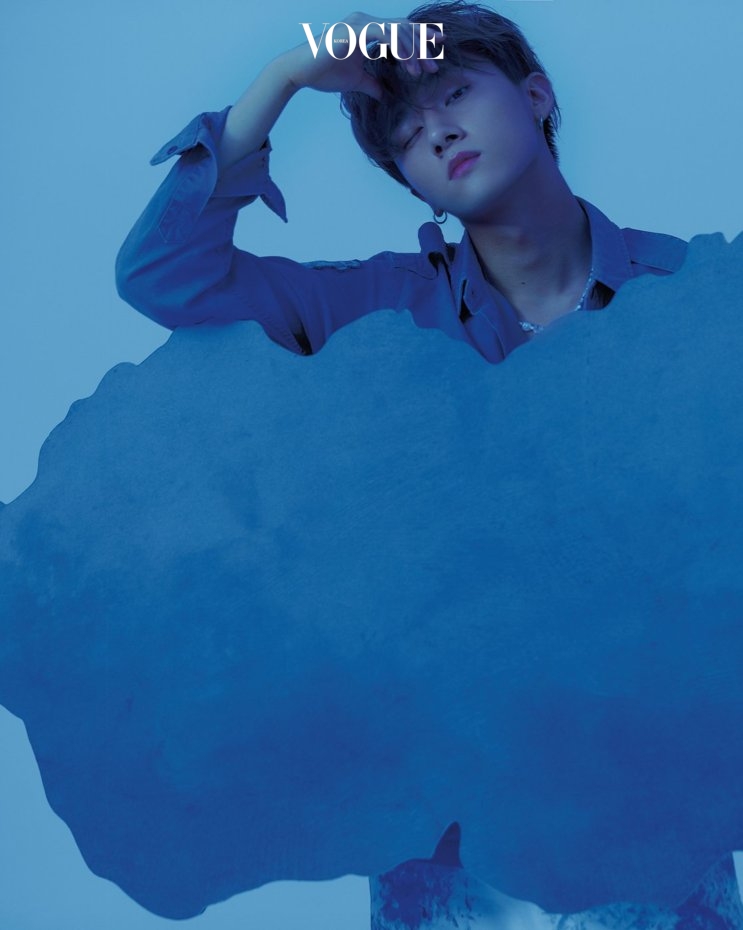 Joohoney and his source of energy

Idol groups usually only go in between concert halls and hotels during their world tour. Aside from security issues, it is also difficult to go out and explore because of their hectic travel schedules.

Because it is hard to recognize whether it is New York or Mexico in a chain-type hotel designed to be stateless, Joohoney buys famous local perfumes or candles on every tour and sprinkles or lights them up in his hotel room whenever they are on tour.

“I want to feel that I’m actually in the city. Sometimes I feel like I’m a local and buy several of those then give them to my acquaintances,” he said, revealing his immense enthuasiasm for scents.

In fact, because of this, you can pinpoint which room Joohoney’s is even with your eyes closed. Nowadays, he shares that he has been collecting natural scents such as baby powder and mugwort. 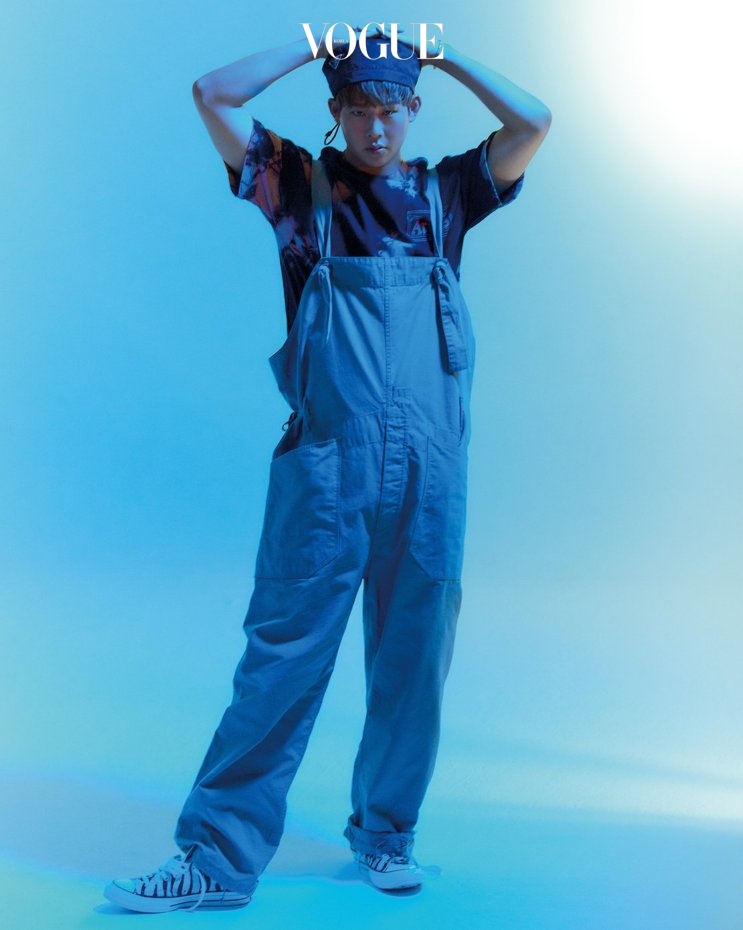 The other thing that gives the MONSTA X rapper energy is a good restaurant. Even when he walks around in a neighborhood that he doesn’t know, he is able to find good restaurants which mostly offer tasty rice soup, noodles, and dumplings.

Sharing a tip, he said, “If the menu is simple and placed on an old-looking sign, it’s more likely to taste good.”

Most of all that gives him energy, however, is music. “I quench my thirst with music. If people enjoy the results, it feels like it’s being filled again.” In fact, MONSTA X’s newest album, FANTASIA X also features the songs “FLOW” and “STAND UP” which he personally worked on. 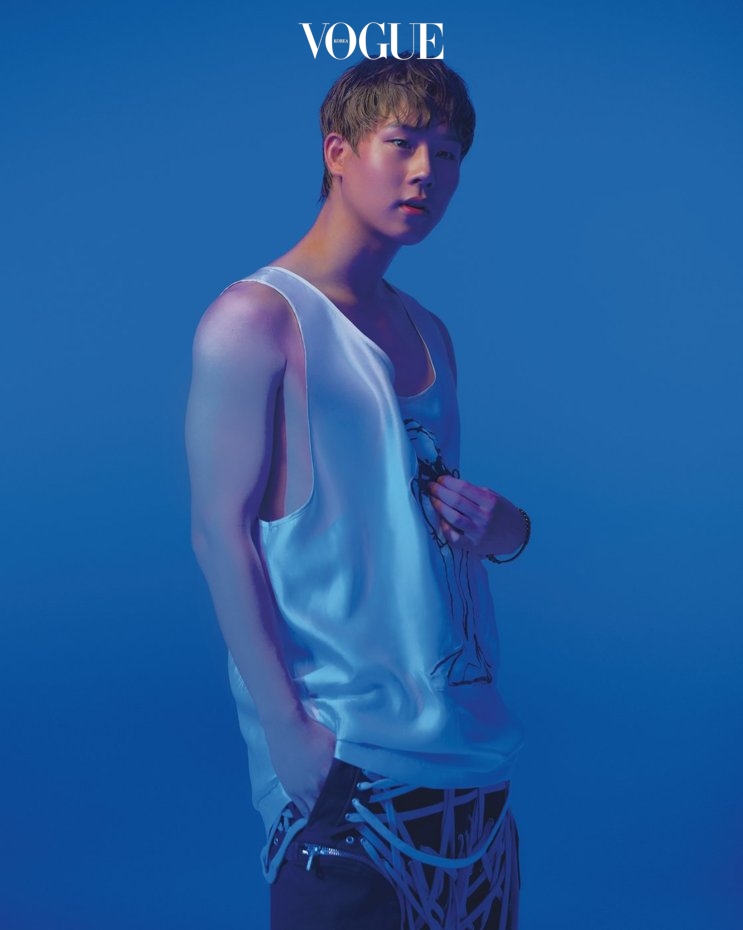 Many musicians focus on sensuous flow, but Jooheon values the messages on his songs more.

In fact, he shared that “Flow” is about how we should go with the flow even if things are a bit difficult.

“It also compares the life of a celebrity to a swan. There are many people that look at beautiful swans, but these swans have to struggle to stay in shape and swim. We, as idols, also have behind-the-scenes like swans. We have to keep struggling while making a living. Both idols and audiences are living a hard life, and I wanted to sing about how we live our lives working hard,” the rapper said. 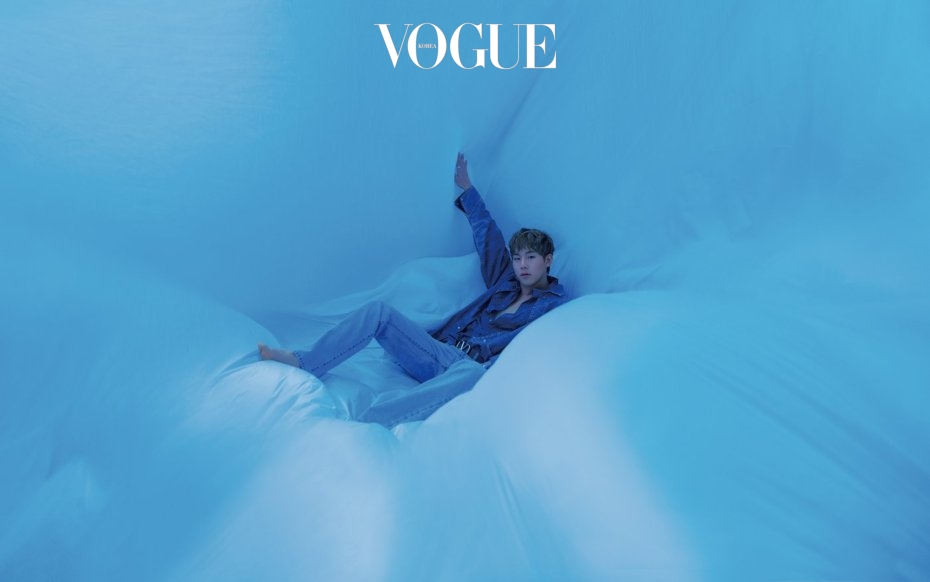 Meanwhile, Joohoney said that “STAND UP” is a song that hopes to provide comfort to those struggling due to COVID-19.

“It means “let’s stand up together and comfort each other”. I’m actually very careful with each song. Everything I do leaves a mark in my life. Rather than looking cool on the surface, I want to fill my works with honesty and sincerity. Isn’t the latter better?” he explained. Additionally, Joohoney shared that his ultimate goal is to empathize with people’s pain and help them with his music.

Out of all his self-composed tracks, he said that his favourite song is “STAY STRONG” from his first mixtape. This is because the song speaks for himself.

“In the lyrics, there is a line that goes, “I never do music to make money/ I just make money to do music”. That’s my heart and my philosophy. I felt upset whenever I heard that idols don’t have musical skills. Thus, I’d like to prove it’s not true. I want you to know that many idols, not just me, also work hard for their musicality,” he said. 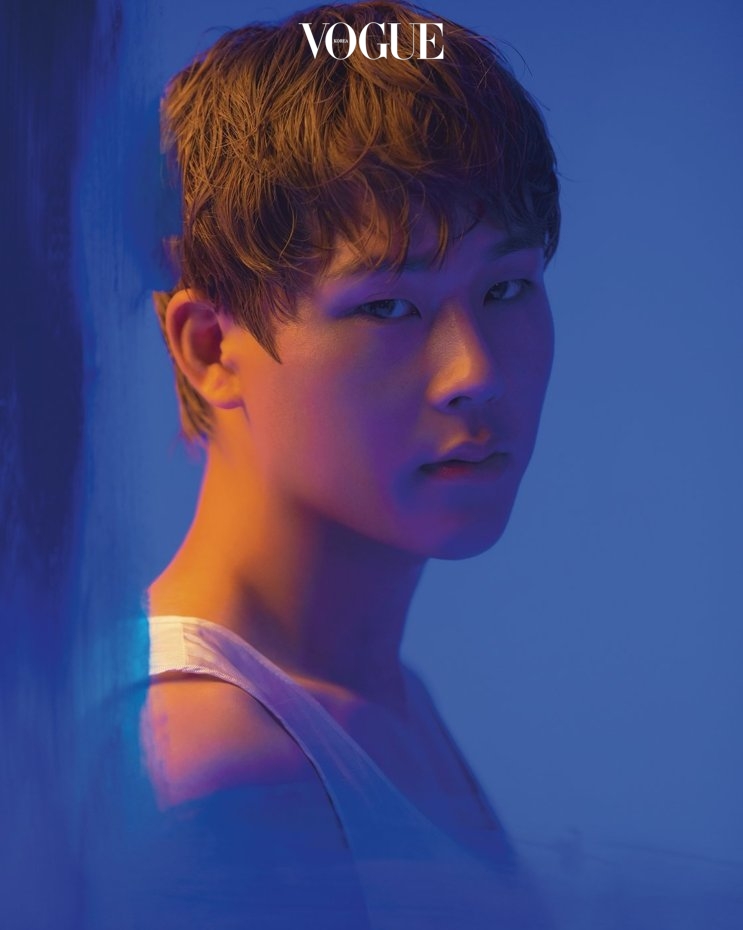 When the topic of Seo Tai Ji and Boys receiving harsh criticism from judges during their debut stage was brought up, Joohoney shared that he listened to their songs not long ago and learned something.

“The seniors did what they wanted to do, and that’s why they rose to their position at the top. I believe that if you have your own motto and focus, things will eventually work out well,” the rapper said.

Joohoney’s way of enduring all the ups and downs of his life as a celebrity is to trust himself. He shared that he liked the saying of “things will happen as you wish for them to happen”.

“I think my words and actions have power. That’s why I take what I say into action, and I work hard to take responsibility for it,” the rapper said.

According to Vogue, talking to Joohoney gives positive energy even in a short time. The rapper also shared that his long-cherished dream is to expand his good influence. In fact, seeing the four-year-old daughter of a married couple from his crew Noark gave him motivation to help children.

“The atmosphere at the scene was a little sensitive sometimes. However, whenever the child appears, everyone suddenly becomes happy. Children have great power, and I want to protect that innocence. Of course, we have to take care of children because they are the future of adults,” the rapper said.

FacebookTwitter
SubscribeGoogleWhatsappPinterestDiggRedditStumbleuponVkWeiboPocketTumblrMailMeneameOdnoklassniki
Related ItemsI.MJoohoneymonsta xVogue Korea
← Previous Story Han So Hee Talks About The Changes In Her Life After The Success Of “The World Of The Married”, Future Plans & More
Next Story → Weki Meki’s Kim Doyeon Becomes The Muse For Makeup Brand “lilybyred”