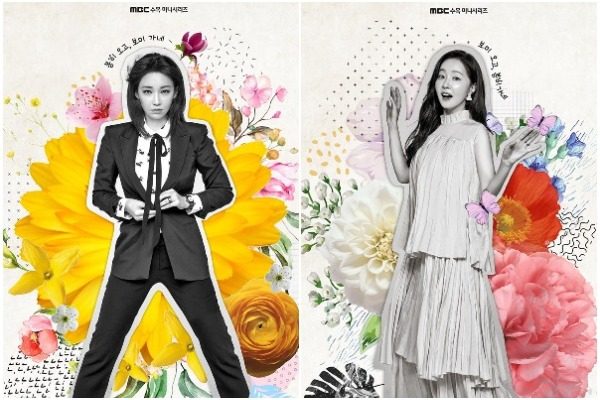 Two women, complete opposites of each other, get into a situation neither foresees – swapping bodies and living each other’s lives!

Former actress Lee Bom and aspiring anchor Kim Bo Mi have nothing in common (well except for the Bom in their names). But these two women would soon find out they are meant to share and experience each other’s existence. 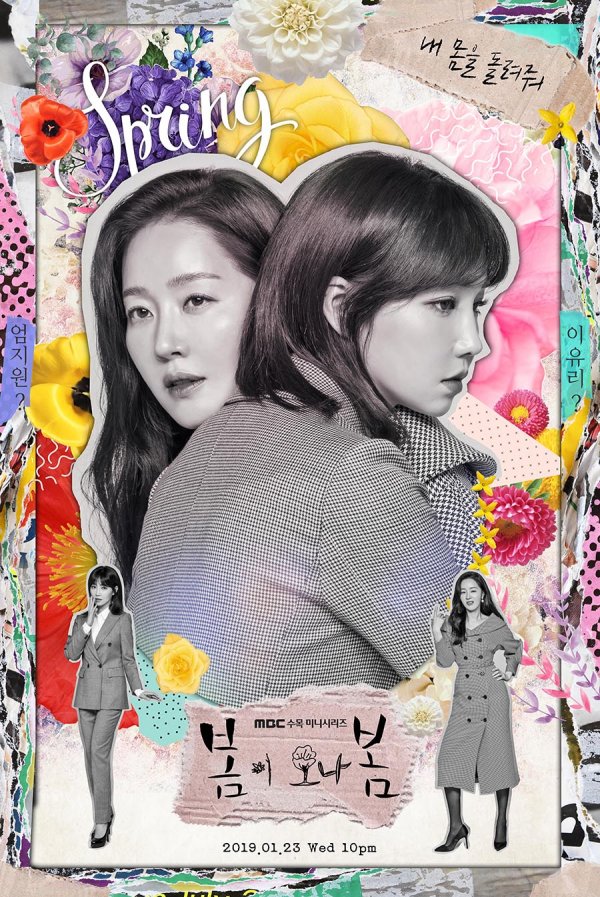 How will this situation change each woman? Will they find their true selves and gain different perspectives? Or perhaps instead of things getting better, it could only get worse? These questions together with the comedy-fantasy premise give Spring Turns To Spring enough appeal.

In the California Institute of Quantum Mechanics, scientists nervously gather as they conduct a test for a newly developed chemical. The test subjects are standing inside separate tubes and as the scientists watch, the men drink the pink and blue concoction. A few tensed seconds passed and the two men have exchanged bodies. Both men show their surprise and the scientists are jubilant for the drug’s success – except for one man. As he angrily shouts at his colleagues that they have no right to play God, he starts shooting people. The last man alive, Bom Il (Kim Nam Hee) begs the shooter to calm down, but he refuses to listen. He is about to shoot Bom Il when the lead scientist, holding on to life, shoots him first.

Bom Il flees the laboratory and flies back to Korea. He searches for Bom Sam (An Se Ha), his friend from the orphanage and frantically asks for his help as people are after him. He tells Bom Sam that the people chasing him are after the drug. When Bom Sam asks him about it, he lies and describes it as an instant aging chemical. Bom Sam harbors hatred towards Bom Yi or Kim Bo Mi (Lee Yu Ri) because of the things she did to him in the orphanage and even as they turn adults. 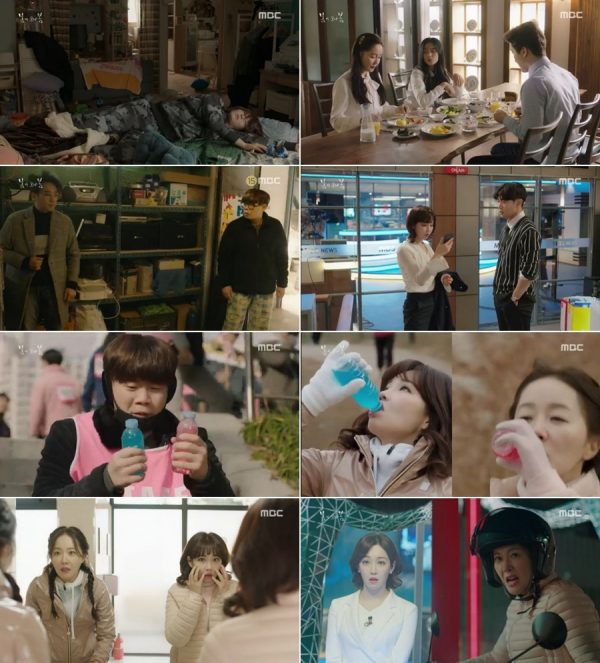 Bo Mi made it seem he was a bad kid, sabotaging Bom Sam’s chances for adoption. She eventually got adopted after Bom Il and left him all alone. He thinks that when Kim Bo Mi drinks the chemical and gets old, she will finally look at him as a man and accepts his love.

Meanwhile, Kim Bo Mi purposely ruins the closing spiel on the nightly news as she wants to shine and get people talking about her. She wishes to be the anchor of the 9PM news program. She is no close to any of her colleagues and oftentimes clashes with them. The woman is messy and only thinks for herself. Her stunt on the closing spiel makes her on top of the searches and a quiz show director wants to have her as guest for their anniversary episode. However, the assistant thinks the director wants to guest Lee Bom and so reaches to her people.

Lee Bom (Uhm Ji Won) is a former actress who is now happily married to an assemblyman. She focuses all her attention to her husband and daughter. Lee Bom devotes some of her time to charities and volunteer works which help her husband’s political career and image. She is soft-spoken, timid and wants everything to be organized and clean. She has a friend, Seo Jin, who manages her schedules, and when the assistant speaks to Seo Jin about the quiz show, she readily agrees on behalf of Lee Bom. Seo Jin and Lee Bom’s husband are actually having an affair and she is oblivious. 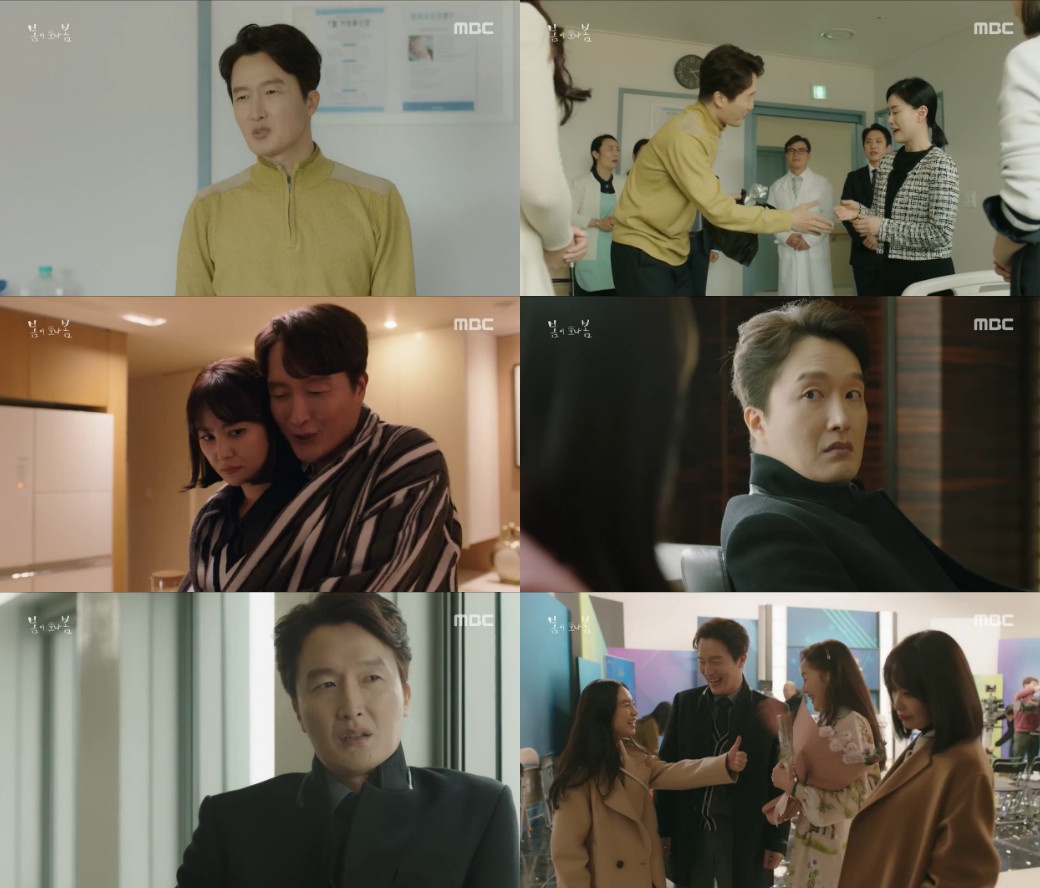 Lee Bo Mi is still able to participate in the quiz show as one of the contestants failed to show up. Lee Bom almost backs out after seeing the contestants. Prior to the live broadcast, Lee Bom and Kim Bo Mi had an unpleasant encounter in the elevator. Bo Mi is offended when her co-worker said she has the same bag as Lee Bom’s but pointed out hers was an imitation. Lee Bom said nothing but Bo Mi resented her.

During the quiz show, Bo Mi is leading and thinks she is going to win, however, Lee Bom answers the last two questions correctly, with final answer worth 500 points. She beats Bo Mi by 50 points and once again, irritates her. Bom hugs Bo Mi and speaks to her nicely. She also tries to share the winnings with her but she refuses, telling Bom that she never shares.

Lee Bom hosts an event called Pink Run which is dedicated to breast cancer awareness. Bo Mi, now officially the 9PM news anchor, volunteers to cover the fun run. On the day of the event, Bom Sam is also there to hand out the liquid drug to Bo Mi. He fails several times and Lee Bom snatches the first bottle. Eventually, as the run progresses and Bo Mi starts to feel fatigue, she accepts the drink Bom Sam offers. Both women drink and after a few moments they feel strange and rush to the ladies room. They feel itchy and both sneeze. When they come out of the stalls, they learn that have swapped bodies. 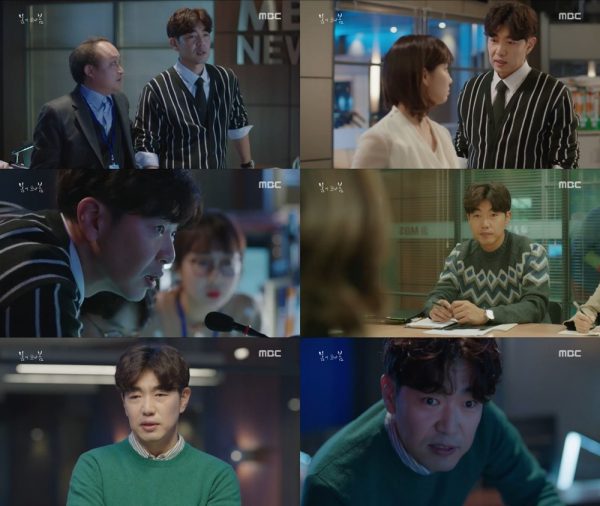 The women freaks out, but Bo Mi recovers first. She tells Lee Bom to go back to the studio as it is her first day to anchor the program. Bom gets scared and she wants to pick up her daughter first. Bo Mi promises she will go to her daughter as long as she goes through the nightly news.

In the studio, Bo Mi is distracted. Her daughter keeps sending her messages asking for her whereabouts and the time she will arrive. Bo Mi, seeing the glazed look on Lee Bom’s, rushes back to the studio and personally witnesses Bom (with her face) cries over a news about a reunion of a son and her mother suffering from Alzheimer’s. 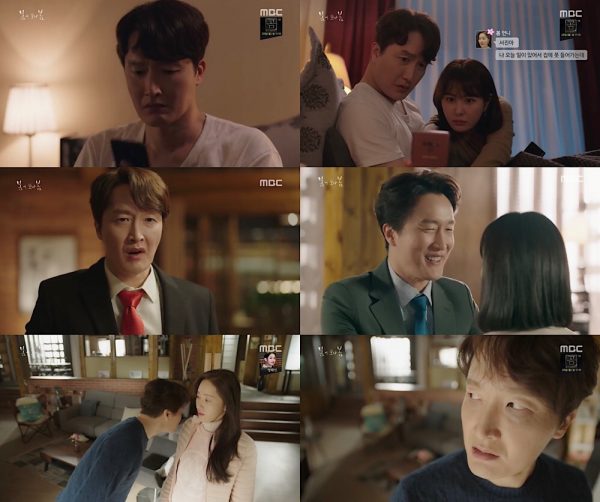 Both women redo the things they did before the exchange, but they fail to switch back. Bo Mi suggests a sleepover thinking that when they wake up the next day, everything will be back to normal. Lee Bom calls her husband who is with her friend Seo Jin. She says that she will be sleeping over Seo Jin’s because she is sick. Her husband thinks that she is with a man and rushes home to see that only their daughter is in the house.

At Bo Mi’s house, Lee Bom feels disgusted with the pile of dirty dishes and clothes. She even freaks out when she sees a bug crawls out from under the floorboard. She falls asleep after Bo Mi refuses to answer any more questions. Bo Mi, on the other hand is unable to sleep because of the snoring. They are still in each other’s bodies in the morning that Bo Mi decides there is nothing they can do but live with it. She asks Lee Bom to list down all her tasks, and in return, she gives her all of hers. They go their separate ways, Lee Bom to the studio and Bo Mi to Lee Bom’s house. When she arrives, Lee Bom’s husband is waiting for her. He questions her the reason she stayed out and she keeps with the lie even though Seo Jin also comes over. 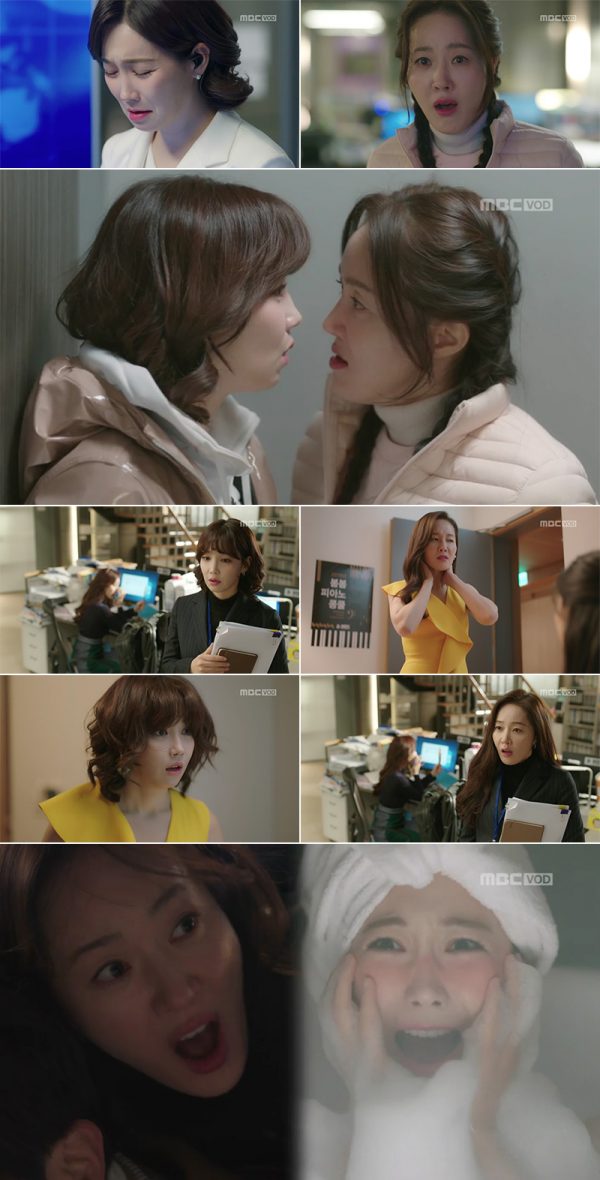 During breakfast, father and daughter looks puzzled as Lee Bom (Bo Mi) drinks cola and leaves the dishes pile up in the sink. The daughter surprises Lee Bom when she ask for their special handshake before the competition starts. Fortunately, Lee Bom feels itchy and before she sneezes, she goes to the bathroom where she changes back to being Bo Mi. Both women are now back in the original bodies and promise never to see each other again. That night, while Lee Bom is in the bathtub and Bo Mi is out drunk, they both feel itchy and once again swap bodies.

Spring Turns To Spring started bland; but was able to pick up momentum especially on the latter part where the switch already happened. I felt they spent the most part of the first episode on character introductions to build up the conflict. It was not a bad thing, but it felt dragging. I understand the need to do it because of the body switch and of course viewers need to see the difference between the two main characters.

The best thing about the first episode is it gave me time to see which characters to hate and root for. Lee Bom’s husband ranks first on my hate list because of the double standard. He has an ongoing affair with his wife’s trusted friend. They were laughing behind Lee Bom’s back because she is not aware of the fact. But he got angry when she said she was going to be out all night. I will be watching out for this character to see how he develops. 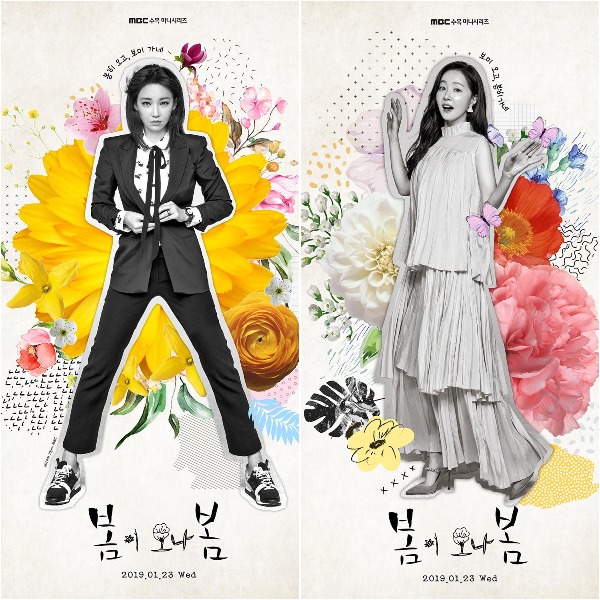 The thing I like about the drama is its premise. I like the body-swapping or soul-switching theme and from movies and dramas I saw, I know for sure that changes are bound to come for the characters. I am looking forward to those changes especially if it means growth for the female leads.

Lee Bom is nice and timid, but those characteristics lead to people taking advantage of her. I get how Bo Mi is trying hard to survive in the cutthroat media world, but it does not mean she has the right to step on people’s feelings and use them to her advantage.

I am hoping for Lee Bom to see her worth and learn to value herself. There is more to life than just taking care of your family and to stand up to her husband and friend. I want Bo Mi to learn that success can come without having to trample on other people’s aspirations. I want her to let go of her selfishness and see that achievements are sweeter if you share it others. We will see if these things are in the works for Lee Bom and Kim Bo Mi. If so, then Spring Turns To Spring is one drama I am willing to spend time on.

Watch Spring Turns To Spring on MBC every Wednesday and Thursday at 10PM.