The villains are getting a taste of their own medicine as The Penthouse 2 marches through its final two weeks with darker revelations.

Karma is indeed a fickle mistress. The Penthouse 2‘s fourth week centers on the villains’ satisfying downfall as those who were previous allies become bitter foes this time. It proves to us that there is no one else to trust but ourselves. 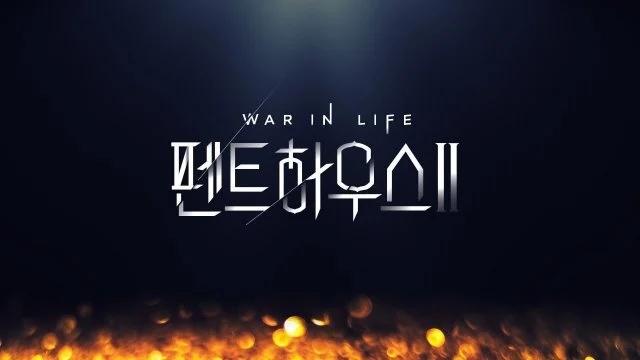 Blood Is Thicker Than Water

Episode 7 opens with Oh Yoon Hee (Eugene) burying her daughter Ro Na (Kim Hyun Soo). As she weeps at her daughter’s grave, Ha Yoon Cheol (Yoon Jong Hoon), who is just about to join her in her mourning, gets a call from Seo Jin. His ex-wife wants him to come over as their daughter, Eun Byeol (Choi Ye Bin), turns lunatic.

Yoon Hee, who feels so miserable, is about to end her life. But Logan Lee (Park Eun Seok) stops her just in time. He reveals that it was Eun Byeol who killed Ro Na. He adds that Yoon Cheol is with his daughter right that very moment making him unable to attend to Ro Na’s funeral.

After getting a confession from Ro Na’s voice teacher, Yoon Hee learns that it was her husband who sabotaged her daughter’s performance at the festival night.

Meanwhile, the ex-couple agree to conduct a medical experiment to help Eun Byeol get rid of her traumatic memories. They seem to have succeeded as Eun Byeol appears to have gotten a selective amnesia after the procedure.

Ae Gyo has an uncanny resemblance to Chairman Joo’s late wife, Shim Su Ryeon, and appears to be living as her for years.

The two get physically intimate and cozy. Having connived in their previous illegal undertakings, there seems to be another scheme underway which would benefit them both.

Chairman Joo accompanies her to the secret passageway which connects his study room to the parking lot.

Meanwhile, Seok Kyung tells her brother that she suspects Eun Byeol as Ro Na’s murderer. Initially skeptic of his sister’s hunch, Seok Hoon realizes later that it does make sense. 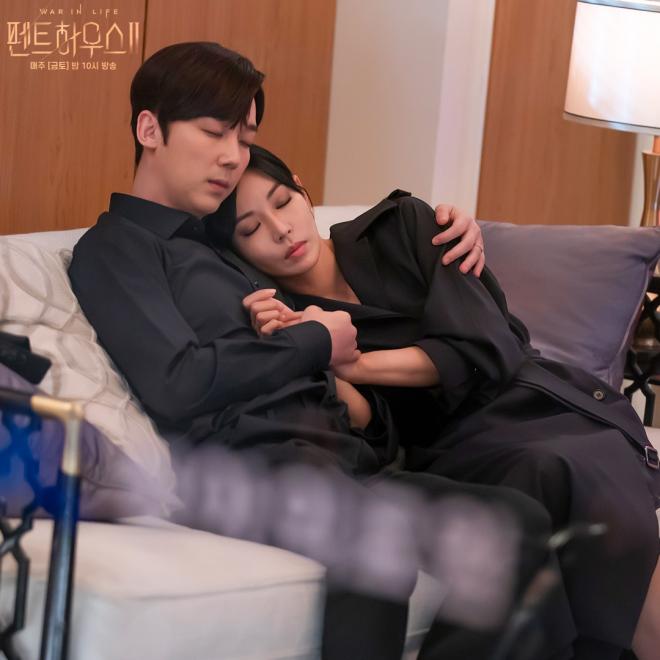 Yoon Hee rushes to the hospital where Eun Byeol stays. She finds Yoon Cheol and Seo Jin looking comfortable with each other which further feeds his criminal intent. But Logan manages to stop her and drags her away from that place. 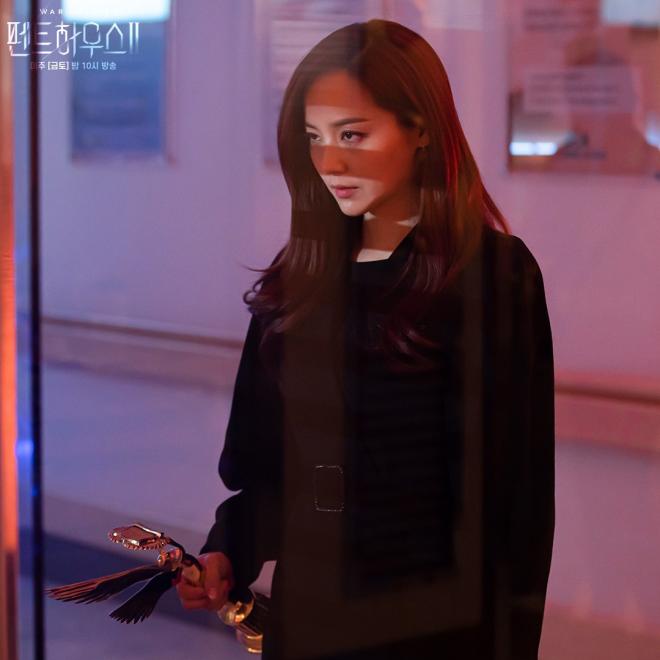 Seo Jin convinces Yoon Cheol to stay with them so that they can start over again as a family. But he blatantly refuses and goes home to Yoon Hee.

Logan then tells Yoon Hee about her mission to track down Ae Gyo. He believes that the woman could be the key to Chairman Joo’s dark secrets.

In a social media post, anonymous bashers comment about Seo Jin being a fake soprano. Spreading like wild fire, the rumor about her hiring a ghost singer in her grand concert instantly tarnished her reputation. The issue becomes a national sensation leading to public anger towards her.

Seo Jin receives a call from Yoon Hee taunting her that she may want to speak with her at that very moment. They meet at the school theater and exchange insults. Seo Jin, at a disadvantage this time, gets down on her knees and apologizes to Yoon Hee for everything she has done to her for the last 25 years.

The following day, Seo Jin surprises the media with her announcement to retire as a singer.

Meanwhile, Chairman Joo is angered by the news about Yoon Hee’s acquisition of Joo Hye In’s properties. Hye In is the girl whom Su Ryeon used to believe as her daughter.

The next day, Yoon Hee goes to Chairman Joo’s penthouse and tells the housemaid that she has an appointment with him. She goes straight to the study room to look for something as per instructions given by Ms. Jin.

Inside Chairman Joo’s study room, Yoon Hee discovers the secret chamber that connects the penthouse down to the parking lot. As she explores the area, she sees Ae Gyo entering the penthouse through the secret passageway. Yoon Hee decides against approaching her, but furtively follows her.

Ae Gyo meets Chairman Joo at his study room where they discuss their ploy in acquiring some properties at Gangnam district. She puts an emphasis on their agreed upon 50/50 shares. 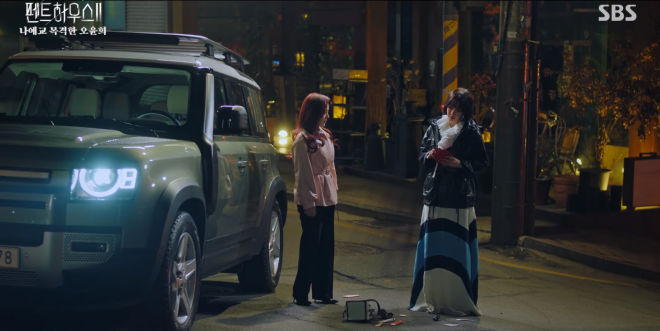 As Ae Gyo leaves the Hera Palace, Yoon Hee immediately chases her through a difficult, winding track until they come face to face with each other. As if she’s not aware, Yoon Hee addresses Ae Gyo as Su Ryeon, to the annoyance of the latter.

At home, Yoon Hee finds some luggages which turn out to be Yoon Cheol’s. Her husband has been waiting for her with the divorce papers ready. He straightforwardly tells her that he no longer seeks for revenge against Seo Jin and Chairman Joo and that he still has some affection left for Seo Jin.

He also raises the fact that theirs is just a contract marriage and that they both agreed to get into it because of their grudges against their common enemies. While Yoon Hee cries for him to reconsider, Yoon Cheol half-heartedly walks away.

Ma Ri (Shin Eun Kyung), taking the role of a big sister, tries her best to provide a positive distraction to Yoon Hee. She takes the miserable lady with her to work at the bathhouse where she can at least convert her negative emotions into something productive.

At school, Eun Byeol becomes the object of ridicule. The students accuse her of getting the benefit of her mother’s position despite lacking talent. Seok Hoon, who appears to be nice to her, secretly wants her to recall every detail about Ro Na’s death.

Seo Jin, after learning that Chairman Joo masterfully dragged her in this desperate situation, confronts him and furiously states her intent to break off from their engagement. With his enormous ego and greed, Chairman Joo makes sure that Seo Jin will regret her decision.

Later on, detectives arrive at Seo Jin’s apartment looking for Eun Byeol as the primary suspect in Ro Na’s murder. To back up their allegations, they present Eun Byeol’s necklace as an incriminating evidence found at the crime scene. Seo Jin begs them to spare her child from the crime. She even takes responsibility in killing Ro Na.

To Seo Jin’s shock, Chairman Joo joins the scene and hands over an envelope of money to the supposed detectives. He even plays the audio recording of her confession. It turns out that it was a ploy to trap her which then leaves her with no choice but to push the wedding through.

Against Seo Jin’s will, wedding invitations are sent to the invitees. Chairman Joo accompanies his bride-to-be to choose her wedding gown. While fitting one of the gowns, Seo Jin furtively calls her secretary to prepare her and Eun Byeol’s passports. Unfortunately, the chairman sneaks in and mockingly tells her that she has no chance to run away.

In a quick flashback to the night of Ro Na’s death, Chairman Joo washes his hands with blood. He also turned the school alarm on which caused intense commotion among the attendees.

Chairman Joo and Ae Gyo spend time together in a shooting activity. However, friction arises between them as Chairman Joo points his final shot at Ae Gyo. The latter admits that she wants to get her share of fortune. Valiantly daring the chairman, Ae Gyo taunts him with the fact that he still needs to use her to his advantage. Hence, he cannot kill her.

Extremely provoked by the strong statement, Chairman Joo almost involuntarily chokes Ae Gyo with his shaking hands. But just in time, Logan appears out of nowhere to knock the chairman down. He drags the unconscious Ae Gyo to his car and tries to revive her.

This week’s episodes are centered on Seo Jin’s annihilated image – from being hailed as a world-renowned prima donna to being dubbed as a fake soprano. She put herself in a pedestal too high that her warranted fall made her irretrievably broken.

Her character took the role of the victim this time with too many people antagonizing her. Rightfully so as she orchestrated a lot of evil things. But her downfall just made the more wicked villain, Chairman Joo Dan Tae, even more powerful.

Yoon Cheol is still my most hated character at the moment and I haven’t felt any twinge of pity for that man. I’m curious as to how the drama’s writer would incorporate a twist that would redeem his character, given that he is Yoon Hee’s true love. Nonetheless, he must be held accountable for his misguided notion of parental love for his daughter.

Episode 8 gave us a hint that the Na Ae Gyo may actually be Shim Su Ryeon. The coming episodes might take us in a flashback to the day Shim Su Ryeon was killed. This might shed some light on the possible switching of the two characters.

Right now, the incorporation of Ae Gyo’s character to the story seems too abrupt and a bit forced. Whether the woman is indeed Su Ryeon, I’d still want to have a clear backstory of Ae Gyo. What’s with her uncanny resemblance to Su Ryeon? Why is she considered as the key to taking down Chairman Joo?

I still hope that Ro Na is still alive, although having too many resurrected characters makes the story bland. Even so, The Penthouse 2‘s ridiculous leap from the logical flow of the narrative arc demands more than the audiences’ natural suspension of disbelief. In this kind of drama, strange twists do not beg for any reasonable explanation.

With just two weeks left, I hope that the drama would not forget about serving justice for Min Seol A, as well as for Seo Jin’s dad.

Do not miss the final two weeks of The Penthouse 2 every Fridays and Saturdays at SBS channel. It also available for streaming via Viu app.