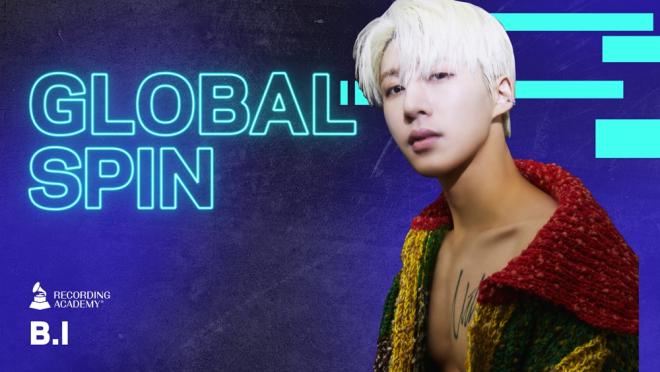 B.I will become the first Asian artist to make an appearance on the program, Grammy Global Spin. The performance series airs through the Grammy website and its SNS platforms. The artist will deliver his stage to fans on January 4, 2022, at 10 am PST/1 PM EST.

Grammy Global Spin is a performance series highlighting the diversity of notable worldwide music. The Grammys and Recording Academy continues to push forth with its efforts to uplift global, diverse music and voices.

B.I is the first Asian act to participate in this series, earning a notable personal achievement but also making an impressive move for the K-Pop genre more broadly. The Grammys sent B.U a proposal in December. Subsequently, he coordinated and arranged the selected songs before filming the live stage for the program.

COSMOS impressed fans with its versatility and wide range, delivering tracks to suit many musical tastes. The half-album was yet another demonstration of B.I’s natural talent and strong self-awareness as an artist and creator.

B.I continues to gain recognition for his projects this year, landing a position in Time‘s “The Best K-Pop Songs and Albums of 2021” with “WATERFALL”.

Meanwhile, B.I’s appearance and performance for Grammy Global Spin will air on January 4, 2022, at 10 am PST/1 PM EST.