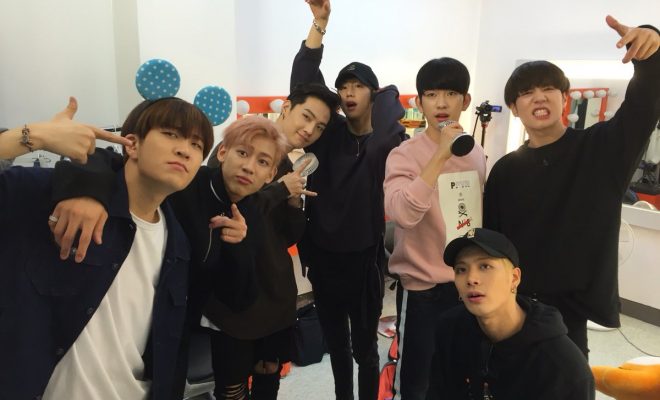 Korean boy group GOT7 are thankful and happy as they commemorate three years in the K-pop scene via a V live broadcast.

JB, Jinyoung, Mark, Jackson, Yugyeom, Bambam and Youngjae relayed their thoughts on the group’s third anniversary and shared their plans and promises for 2017.

“I can’t believe it as the time flew quickly,” youngest member Yugyeom remarked. Bambam was perplexed and amazed that three years have passed since the group made their debut with Girls Girls Girls. “It seems like only yesterday, but we’ve already made it this far,” he added.

“I wish we could continue this beautiful life until 30,000 years,” Youngjae said.

Leader JB also shared his honest thoughts on the group’s third anniversary. According to him, he thought the day would not come for the group to celebrate three years in the industry.

The members then relayed their gratitude to their fans, IGOT7s. “I believe that we’re in this position because of your love and support,” JB said.

“Thank you IGOT7s for the past three years. I do remember each and every moment,” oldest member Mark added. Jinyoug also thanked the fans for “growing with them”.

Jackson also looked back on the past years of the group, commenting that good and bad things happened. “But in my opinion, taking a step by step and staying together for a long time with a firm position is the most important thing,” he said.

To commemorate the anniversary, each member declared a promise to keep in 2017. Youngjae, who recently appeared in King of Mask Singer, vowed to be a better singer and “make more than one ab” this year.

“I never said that I’ll make all six abs. I said I will make more than one,” he said.

Bambam and Mark both promised to gain more weight. According to Bambam, he will try to put on weight to reach 60 kg. Mark, on the one hand, will work out hard this year to regain the weight he lost due to sickness.

“I will work out hard this year, be muscular and show you next year,” he said. However, the members questioned Mark’s intention of showing off his buffer self next year instead in 2017.

The oldest member defended saying, “It will be difficult to be muscular within a year.”

Yugyeom also sought to improve himself in 2017 by upgrading his singing and dancing. The youngest member of GOT7 promised to work on his dance breaks with the choreographer and perform on stage.

JB, for his part, wished to have all the goals set by GOT7 to be met and be healthy. Jinyoung and Jackson shared the same sentiment of working hard and showing a GOT7 that fans will be proud of.

GOT7 took home a bonsang (main award) last January 14 in the annual Golden Disc Awards. The group is also in the midst of their Asia fan meeting which visited countries like Malaysia and Philippines