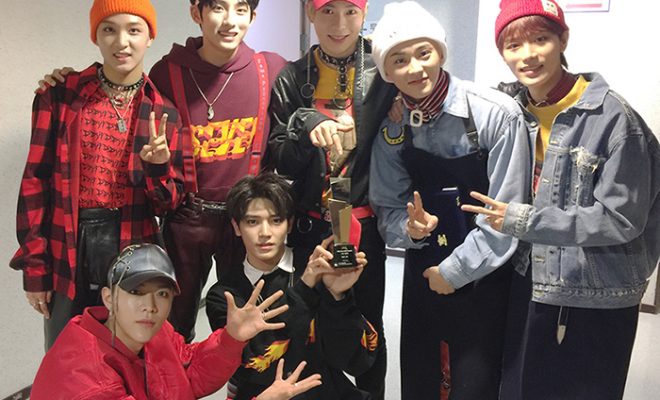 And NCT 127 is succeeding in doing so.

Leader Taeyong expressed his gratitude to fans, the staff and executives of SM in his acceptance speech. He also said receiving the award is ‘the first opportunity’ and ‘a great gift’ for NCT 127.

Jaehyun extended his thanks to the other sub-unit members of NCT who met through the dream of becoming singers despite differences in cultures and race.

“The NCT members who are here now, and all of the other NCT members out there, I really love you guys… Let’s all stay together for a long time in the future,” he said.

Taeyong, Jaehyun, Taeil, Yuta, Haechan, Mark and Winwin said they were ‘really honored and happy’ to receive the award.

“It’s an award that one could only get after debuting and being able to attain it was really a great honor. We are truly happy.”

The members also posted their individual ‘thank you’ messages in the group’s official website.

On Their Senior, EXO

The septet also relayed their gratitude to their seniors, EXO.

“Being able to attend the awards ceremony together with EXO-sunbaenim and receiving an award made us really happy.” The members also admitted they were nervous but their seniors made them feel at ease.

NCT 127 also revealed that EXO gave them a lot of advice to which they are very thankful. The group also relayed its goal to follow the footsteps of EXO as singers and idols.

“We will work harder to become a cool singer like EXO and be a junior group that they will be proud of,” shared the members.

The members of NCT 127 were also determined to show other sides of NCT in the future. The group also shared its dream to hold a solo concert and promote its music through worldwide stages.

“We will work harder to develop our image every year, create a more matured image and also show the image of us that we were not able to present this year.”

The septet asked their fans to ‘watch over them in 2017’ with a promise to reciprocate the support with ‘a more hardworking NCT 127’.

“Let’s support one another, create more memories and be together eternally.”

NCT 127 is the second sub-unit of SM’s boy band project after NCT U. The group debuted on July 7 with Fire Truck and released its first mini album ‘NCT #127’ on July 10.

‘NCT #127’ has sold more than 82,000 copies as of the writing of this article. The group also debuted at the second spot of Billboard‘s World Album Chart. The mini album was also the top-selling K-pop release in America on its debut week. Fire Truck also ranked second on the World Digital Songs, matching NCT U’s rank for 7th Sense.

NCT 127 is also reportedly joining the line-up of comebacks for the last months of 2016.