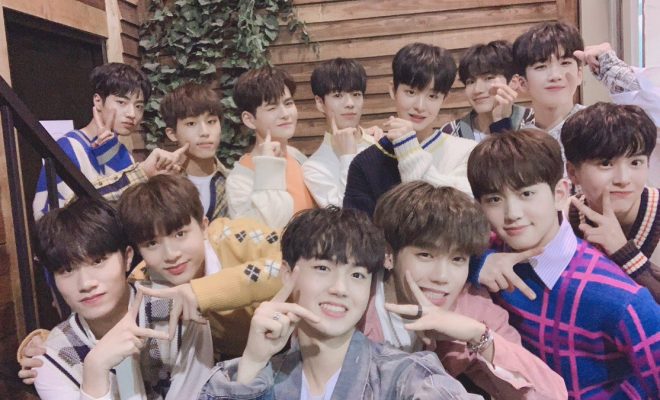 Fans of YG Entertainment’s next generation boy group Treasure 13 commemorated the first live broadcast of the boy group on February 13 with a shower of hearts and comments.

The special V Live broadcast recorded more than 1.3 million views and ended with over 220 million hearts — showcasing the boys’ popularity, as well as the fans’ enthusiastic reception of the boy group even before debut.

In the hour-long show, Treasure 13 members shared their thoughts on finally debuting. They also reminisced behind-the-scene stories from YG Treasure Box and showcased their various charms to appeal to fans. Additionally, the boys talked about their future activities and goals.

They then celebrated their coming debut with a cake-making ceremony, a group photo, and words of gratitude to fans.

Following the V Live broadcast, Treasure 13 will also star in its own web-based reality show Open the Treasure Box, which features the members’ preparation for debut which, according to YG Entertainment’s Yang Hyun Suk, will be between May and July.

Moreover, aside from promotions as a full group, the new boy group will also be divided into two teams — Treasure and Magnum — and do activities as such.

Hellokpop, as an independent Korean entertainment news website (without influence from any agency or corporation), we need your support! If you have enjoyed our work, consider to support us with a one-time or recurring donation from as low as US$5 to keep our site going! Donate securely below via Stripe, Paypal, Apple Pay or Google Wallet.
FacebookTwitter
SubscribeGoogleWhatsappPinterestDiggRedditStumbleuponVkWeiboPocketTumblrMailMeneameOdnoklassniki
Related ItemsTreausre 13
← Previous Story BTS’ V Hits 100 Million Streams In Record Time With “Scenery”
Next Story → LOONA Announces Title Track And Comeback Details
COVID-19 ALERT