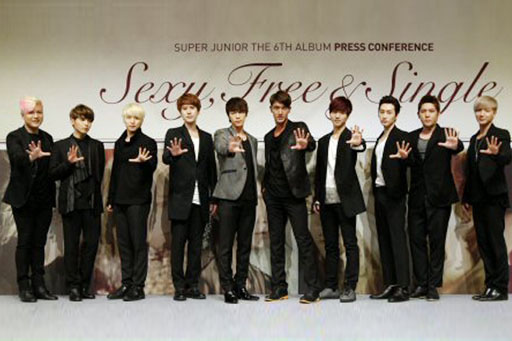 With 335,744 copies of Sxxy, Free & Single sold during the month of July; Super Junior sets the monthly sales record for an album since the predominance of the digital era in Korea. Though the famous boy band has accustomed the world to these kind of performances on music charts, this feature still comes out as a shock.

Until Gaon dropped out the actual number of albums sales a few days ago, there were many signs indicating Super Junior wouldn’t pull such a tour de force. For starters, the absence of one of their most famous members, Kim Heechul (currently serving in the military), has to be noted. Then, SM Entertainment put little emphasis on this 2012 comeback. Unlike their previous release, Mr Simple, fewer teasers were propelled to arouse interest, and the physical album did not benefit from multiple cover versions dedicated to each Super Junior member; which, last year, resulted in many fans purchasing every different versions, therefore considerably boosting album sales.

Despite that, Sxxy, Free & Single sold nearly 50,000 copies more than Mr Simple on its first month; 135,000 more than the ostentatiously branded “return of the superior” Bonamana went on to sell for the whole year of 2010. What’s even more striking is that Super Junior didn’t (have to) create this summer’s buzz to reach such summit. In the shades of “Gangnam Style”, the Olympic Games and T-ara, Super Junior serenely enjoyed their comeback. Far from YouTube‘s spamming competition that followed Mr Simple’s MV release last August, Sxxy, Free & Single‘s MV displays an honest 10 million views. “Confidence” is what defines this new Super Junior.

This was just a Super Junior 2012 comeback. Fans knew it – no need for endless teasers; the world knew it – no need to spam YouTube to grab some attention; their CEO knew it – no need for multiple album cover versions. It is as though a cap has been unhurriedly passed this time around. The SM group that was never meant to be – or last – has shifted its shape to an undefeated heavyweight champion which successes and qualities are above all doubts. Super Junior is now this tranquil force within the industry that has enough roots to rule for a many long years to come.

But after all, with the undying supports of ELF‘s, and how the group is repaying them, wasn’t this rather EXPECTED?