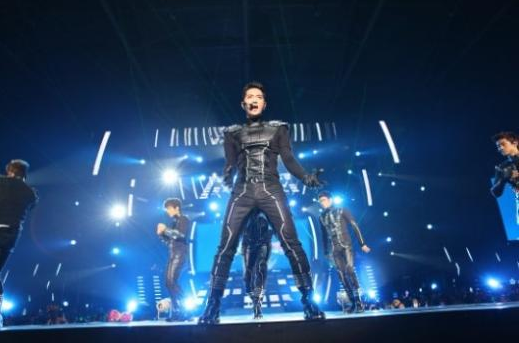 2PM ended its concert at Taiwan successfully, continuing a successful “What Time Is It?” tour in Asia.

The group flew to Taiwan on December 14th and completed concert rehearsal and an interview there, tackling a busy schedule. The concert was held in Nangang Exhibition Hall on the 15th. 2PM performed Hands Up, Again & Again, and other hit songs to impress the 7,000 fans who attended the concert. The members gave an enthusiastic stage with their songs and performances; in particular, Junho sang Undefeated, a song by Taiwanese singer Vanness Wu which Junho himself was featured in.

After the concert, 2PM said “We returned to Taiwan to meet our fans after a long one year for the concert. We had a very happy time.” Following up the Taiwan leg of the Asia tour, the group will have its next concert in Macau on December 22.

Hellokpop, as an independent Korean entertainment news website (without influence from any agency or corporation), we need your support! If you have enjoyed our work, consider to support us with a one-time or recurring donation from as low as US$5 to keep our site going! Donate securely below via Stripe, Paypal, Apple Pay or Google Wallet.
FacebookTwitter
SubscribeGoogleWhatsappPinterestDiggRedditStumbleuponVkWeiboPocketTumblrMailMeneameOdnoklassniki
Related Items2pmWhat Time Is It
← Previous Story LeeSsang to hold first U.S. tour
Next Story → Core Contents Media releases trainee practice videos