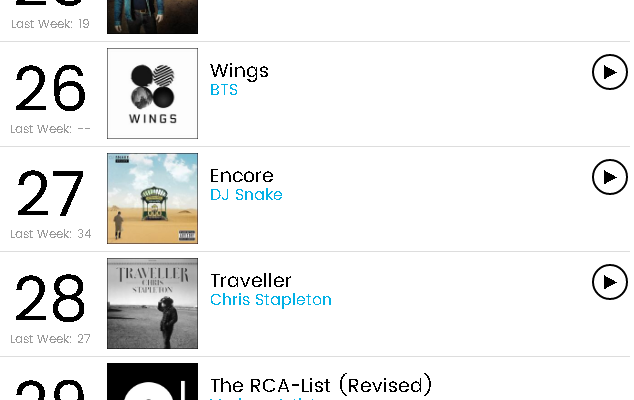 BTS Flap Their WINGS Into US Billboard 200 Chart

BTS‘ WINGS Album has finally landed on US Billboard 200 chart.

Currently on the 26th spot, this is by far the most remarkable achievement by a Korean boy group, surpassing sales that of 2NE1‘s Crush album released in 2014, and EXO‘s 2015 album Exodus.

Not only is the album gaining ground on the Billboard 200 chart, tracks from BTS’ current second album WINGS and The Most Beautiful Moment in Life: Young Forever particularly Fire, are mostly shared on Twitter, according to Billboard’s Real-Time Chart .

For the Artist 100, BTS was at 16th, sharing the spotlight alongside Adele, Beyonce, Coldplay, Drake, Kanye West, Justin Bieber, Rihanna, Taylor Swift among others.

On the other hand, BTS took the top spot on the World Albums chart this week, with the highest ranking debut ever on the chart.

The rankings expressed in this article are based at the time of writing only.