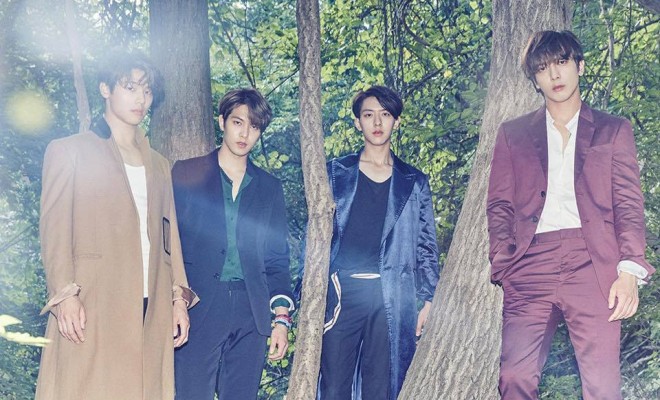 CNLBUE who will be releasing its 4th Japanese album, has just dropped the full music video of title track Supernova on September 7!

CNBLUE’s 4th album colors is slated for release on September 30; it has been a year since their latest album release in Japan. The quartet will then embark on a tour entitled CNBLUE 2015 ARENA TOUR ～Be a Supernova～ on November 3 starting in Nagano and wrapping up at Nippon Budokan in Tokyo on December 3, a total of 9 performances in five cities.

Colors will contain 11 tracks, the talented CNBLUE members have participated in the process of making the whole album. Check out all the credits on their official site.

In related news, CNBLUE will release its 2nd Korean full-length album 2gether on September 14, and kick off its tour CNBLUE LIVE [COME TOGETHER] IN SEOUL this October!

We need your support! If you have enjoyed our work, consider to support us with a one-time or recurring donation from as low as US$5 to keep our site going! Donate securely below via Stripe, Paypal, Apple Pay or Google Wallet.
44
SHARES
FacebookTwitter
SubscribeGoogleWhatsappPinterestDiggRedditStumbleuponVkWeiboPocketTumblrMailMeneameOdnoklassniki
Related Items2getheralbum releaseCNBLUEcolorscomebackJonghyunJungshinMinhyukSupernovaYonghwa
← Previous Story BoA To Appear on ‘Hidden Singer 4’
Next Story → Block B’s Park Kyung To Make Solo Debut