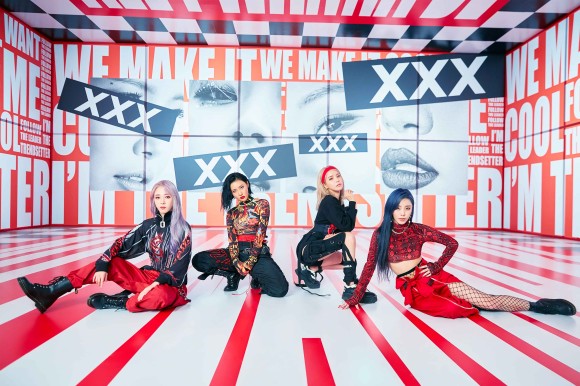 MAMAMOO releases an original Japanese edition of reality in BLACK on March 11. The album consists of 13 tracks along with the Japanese version of the hit song, “HIP”, and Japanese track, “Shampoo”.

According to Oricon streaming chart, the sensational song “HIP” has reached 1 million views and ranked  1st under the K-Pop selection. It is also at the top ranking on LINE Music’s K-Pop chart.

Not only the song received numerous recognition, but its music video currently has over 62 million views on YouTube. Notably, the video has been staying at Billboard Japan’s Chart for nine consecutive weeks.

In addition, the girls will be having their 3rd Concert Tour in Japan in March. There will be two sets of performances for each concert cities.

The concert ticket costs around 9,900 yen and will be available in various ticketing outlets in Japan.

Hellokpop, as an independent Korean entertainment news website (without influence from any agency or corporation), we need your support! If you have enjoyed our work, consider to support us with a one-time or recurring donation from as low as US$5 to keep our site going! Donate securely below via Stripe, Paypal, Apple Pay or Google Wallet.
FacebookTwitter
SubscribeGoogleWhatsappPinterestDiggRedditStumbleuponVkWeiboPocketTumblrMailMeneameOdnoklassniki
Related ItemsMAMAMOOMAMAMOO 2nd Japanese albumMAMAMOO 3rd Concert in JapanMAMAMOO albumMAMAMOO HwasaMAMAMOO Japanese albumMAMAMOO MoonbyulMAMAMOO reality in BLACKMAMAMOO SolarMAMAMOO Wheein
← Previous Story DAY6’s Jae Announces Release Of New Song “Otherside” From His Ongoing Personal Project As eaJ
Next Story → A.C.E Announces Encore Concert “UNDER COVER: AREA KOREA” In Seoul This February