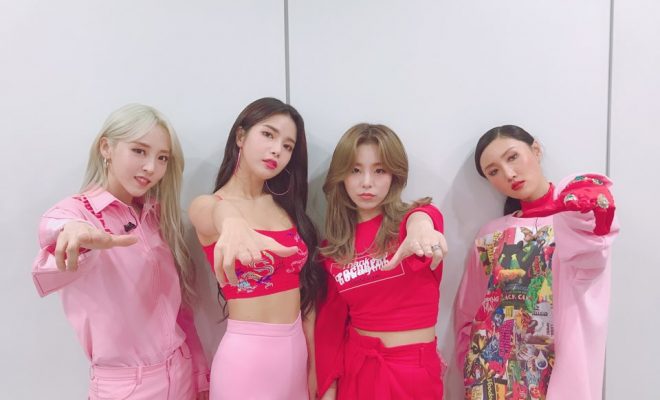 MAMAMOO proves that they are truly K-Pop’s party queens.

MAMAMOO throws a vibrant dance party with their latest title track. The music video of “gogobebe”, from their White Wind album, reached almost 10 million views as of March 21st. The vocal masters released an equally fun and colorful performance video as a special treat for MooMoos. Watch it below.

In related news, they mentioned that they made this album to have fun. It is very happy and colorful compared to their previous albums that are part of their Four Seasons Four Colors Project. In relation of being the signature party queens, they also proved that they’re not always the serious bunch with their B-track, “Waggy”. Watch the lively performances below and be amused with their witty costumes.

Their ninth mini album is the last component of the Four Seasons Four Colors Project. Wheein’s signature color and symbol, White Wind, concludes the colorful adventure. Her theme follows the symbols of other members: Hwasa’s Yellow Flower, Moonbyul’s Red Moon, and Solar’s Blue Sun (Blue;S). White Wind matches the pure and innocent image of Wheein and the album describes the group’s history from the beginning in a white canvas.

Read Also: MAMAMOO To Mesmerize Singapore With A Fan Meeting In April

Hellokpop, as an independent Korean entertainment news website (without influence from any agency or corporation), we need your support! If you have enjoyed our work, consider to support us with a one-time or recurring donation from as low as US$5 to keep our site going! Donate securely below via Stripe, Paypal, Apple Pay or Google Wallet.
FacebookTwitter
SubscribeGoogleWhatsappPinterestDiggRedditStumbleuponVkWeiboPocketTumblrMailMeneameOdnoklassniki
Related ItemsGogobebeMAMAMOOWaggy
← Previous Story MONSTA X To “Play It Cool” With Steve Aoki For New English Track
Next Story → Brand New Boys Announce Scheduled Debut In May Through V Live Broadcast