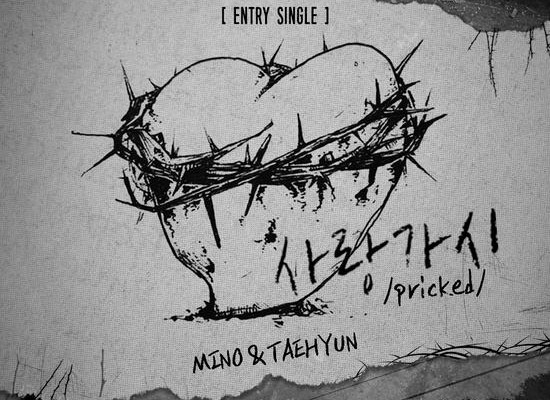 WINNER has kicked off its long-awaited comeback in 2016 with project EXIT Movement. The group’s entry single Pricked, a duet by members Mino and Taehyun, soared straight up to the top of multiple charts upon its release on January 11!

Aside from topping 5 domestic charts (Mnet, Bugs, Olleh, Naver Music and Soribada), Pricked also snagged the top spot of the iTunes chart in 6 countries, including Singapore, Thailand, Vietnam, and Brunei.

WINNER first unveiled the track publicly at the group’s live comeback countdown show ENTRY NIGHT via V-app. During the stream, the boys disclosed that their mini album EXIT: E will be released on February 1st, with the title track Baby Baby. They also revealed their plans for a solo concert, and expressed their interest in participating in variety shows.

Were our readers’ hearts pricked by Mino and Taehyun’s beautiful duet?

We need your support! If you have enjoyed our work, consider to support us with a one-time or recurring donation from as low as $5 to keep our site going! Donate securely below via Stripe, Paypal, Apple Pay or Google Wallet.
44
SHARES
FacebookTwitter
SubscribeGoogleWhatsappPinterestDiggRedditStumbleuponVkWeiboPocketTumblrMailMeneameOdnoklassniki
Related ItemsBaby BabyBugsENTRY NIGHTEXIT:EiTunesMinomnetNaver MusicOllehprickedProject EXIT MovementSoribadaTaehyunWinnerWinner 2016 Project Exit Movement
← Previous Story TEEN TOP Gives A ‘Warning Sign’ In New Teaser Video
Next Story → B.A.P To Visit 15 Countries For 2016 World Tour