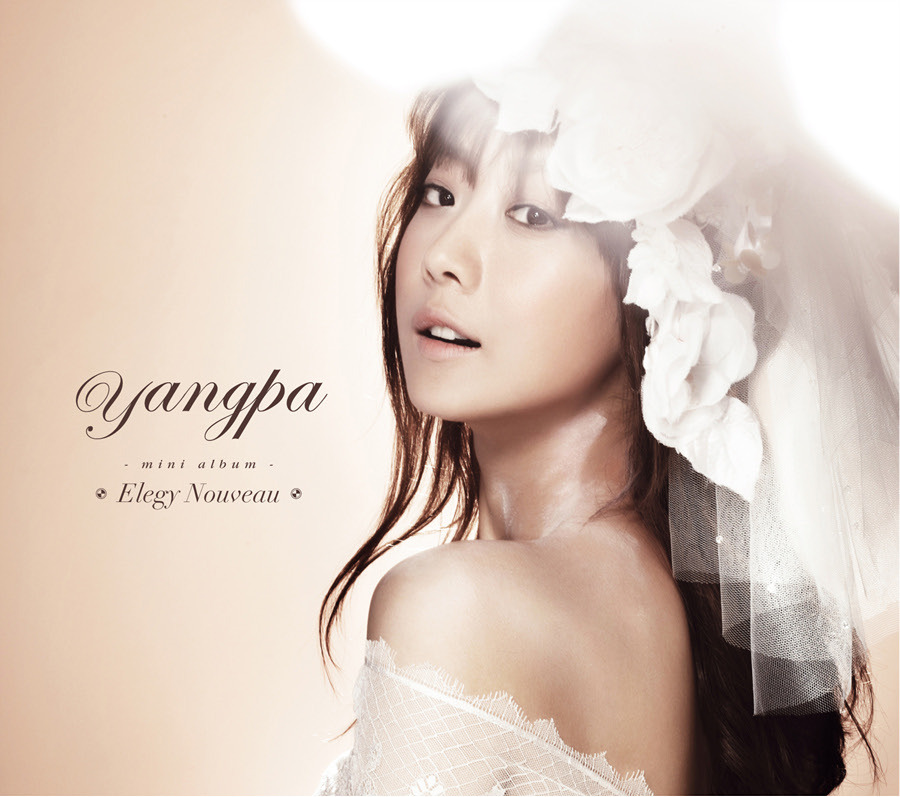 At this point, it seems reasonably safe to divide Yangpa‘s career into two distinct eras. The “old” Yangpa would cover the time from her 1996 debut to the 2001 Perfume, and the “new” would pick up after her 2007 comeback The Windows of My Soul.

Perhaps it was the effect of the six-year hiatus dividing those two eras, but Yangpa’s music changed. The Windows of My Soul was bolder and richer in every way, as opposed to her old outings. Not only did the sound diversify and evolve, but Yangpa herself was more mature, more able to explore the nooks and crannies of the human mind. And the last time we saw her on stage, in 2009, promoting Spirit as part of a film soundtrack, she had become even more incisive and emotive than she was in the early years.  So, it shouldn’t really come as a surprise that she used the second hiatus to improve on her formula again.

On one hand, Elegy Nouveau, the first EP that Yangpa has ever released, is an extension of the changes we began to see in The Windows of My Soul. The first album had hints of jazz and swing sprinkled throughout; this one is jazzier. Windows aimed for a certain elegance in its theme and sound; Elegy handily takes care of it in both. But on the other hand, this EP strays from that route a little, as well. While The Windows of My Soul completely eschewed synthesized sound in favor of a very analog, unplugged feel (in pretty sharp contrast to the keyboard-heavy, 90s-style R&B ballads found right up until Perfume), Elegy Nouveau tastefully incorporates a small electronic palette. Still, for the most part, the EP tends to share more characteristics with the immediately previous album.

Title track 아파 아이야 (It Hurts), a tempered pop ballad, is a good example. I say “tempered,” because even though it’s a sad, dramatic piece with big scale that could pass for the medium-tempo genre if it tried, it’s not totally invested in the whole intense sadness deal. The strings craft this flowing chorus, which actually has one of the more unique-sounding melodies of the year so far, and it sounds heartbreaking. But it’s more suppressed sadness than explicit emotion (part of it probably has to do with the way the pitch falls rather than climbs in the chorus). The song has a climax, but because the melody is so innately restrained, it’s not quite explosive.

The effect is intentional: Yangpa is careful to hold her voice back for much of the song, save for a couple special spots. The tone of the chorus is further counteracted upon by the contrasting tone of the verses; it’s similar to the effect that Davichi‘s 8282 used, except It Hurts does it a little more naturally.

This exercise in moderation is what makes It Hurts a spiritual successor to The Windows of My Soul, and especially to tracks like La Vie En Rose. In both, a notion of elegance is achieved through suppressing emotional extremes. It works, but in doing this, Yangpa sacrifices the ability to affect her audience with the intensity of emotion, which could be a death sentence for a ballad artist. What good would elegance be if the listener doesn’t care? Instead, she chooses to reach out with the depth of emotion: the bottled-up, brooding pain and longing are meant to resonate more powerfully than any wailing or screaming would. Little touches, like the nearly unnoticeable piano punctuating the chorus, add to that type of subtle influence and help to make it work.

The rest of the album doesn’t share this ordeal on emotion, but boy, are they keen on keeping the elegance thing going. Yangpa took great care to feature a variety of styles, and on the whole, there’s a good selection of well-arranged, thoughtful tracks here.

Album opener 너라면 좋겠어 (I Wish It Were You) features an exhilarating medium-tempo soundtrack to Yangpa’s jubilant performance; it’s similar to K.Will‘s recent, disappointing Heart Beats, but with much more energy and vibrancy going for it. 그 때 그 사람 (The Man Back Then) is, quite literally, lacking of a real genre. What it does offer, instead, is an embarrassment of riches in sounds: the track is built upon elements from Latin and swing jazz, through bombastic brass accompaniment and more subtle strings and use of effecter, and also adds a rock section in the bridge. It’s a novel experiment that rewards with a showstopping, unique track (although the rock section almost feels as if it’s placed there just for the sake of variety), and Yangpa does an admirable job of tailoring her performance to the shifts in style.

Bon Appetit continues the theme with big-band jazz: think of it as a streamlined, less flashy Marry Me. It ends up being a sweet little piece, as Yangpa is aided by BEAST‘s Doojoon in an attractive performance. (Incidentally, there’s a real chance that this kind of brass-heavy jazz becomes Yangpa’s trademark style: her vocals are a good fit, and no other mainstream artist really pursues it.)

The only track that doesn’t really measure up is 친구야 (Dear Friend), as it falls back on a stale ballad formula and displays a few problems in pacing. It does, however, give Yangpa a chance to show off the more powerful side of her vocals, lest we forget from not having heard it in about four years. The prowess is noted.

Yangpa is building a new brand for herself–she did it as a teenager once, but it seems that she wants to reinvent her wheel after a decade of exploring that musical world. In that regard, Elegy Nouveau is more than successful for a (presumably) transition EP. The indulgence in the elegant, refined style that is so pervasive in the album does run a future risk, however: losing emotional foothold with listeners. It’s a non-factor in Elegy Nouveau, but Rihanna‘s intentionally detached style was a non-factor in Good Girls Gone Bad before it dug her into a hole in Rated R.

So long as Yangpa avoids developing her trademark into a mannerism, she will be okay. The thirty-two-year-old’s career is starting in a new direction, and Elegy Nouveau (anyone else wonder why it’s not spelled Elegie Nouveau for consistency, by the way?) is just that: a new elegy, bidding farewell to the Yangpa of old.