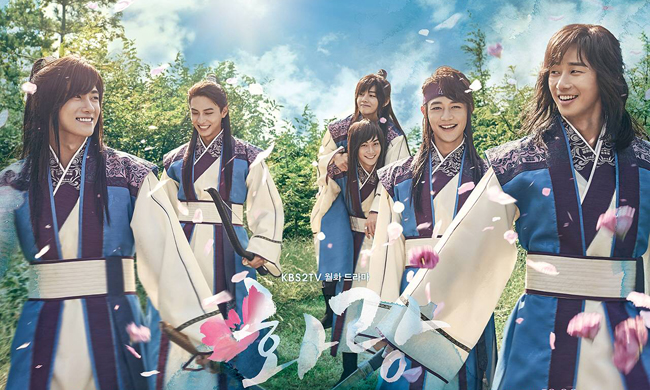 ‘Hwarang’ Performs Worse Than ‘Moon Lovers’ In First Two Episodes; Will It Be A Flop Too?

Will ‘Hwarang’ end up in the footstep of ‘Moon Lovers’?

The Monday-Tuesday KBS drama began with a rough start, similarly to the poorly rated SBS drama ‘Moon Lovers: Scarlet Heart Ryeo’, which has just ended. Although the latter drama featured handsome actors like Lee Joon Gi, Kang Ha Neul, and Hong Jong Hyun, it did not meet the local audience’s expectations with their bad acting. The drama, however, has done exceptionally well in countries outside of Korea.

During a press conference for ‘Hwarang’, producer-director Yoon Sung Sik stated, “The drama in some ways may look similar to Moon Lovers. The heroin appears with a band of handsome men. But compared with the SBS drama, our drama’s overall tone is bright and cheerful.”

Despite the big names in the cast, ‘Hwarang’ has failed to deliver in its first two episodes.

According to Nielsen Korea, its first episode has only managed a 6.9 percent viewership, behind 7.4 percent of the ‘Moon Lovers’. Its second episode showed a slight improvement of 7.2 percent.

‘Hwarang’ has just started, so it might be still too early to determine its fate with ‘Moon Lovers’. But it is clear that the first two episodes are already lacking the hype that it much needed to succeed in the following weeks to come.

According to comments posted by Korean netizens, many expressed disappointment in ‘Hwarang’.

“The first episode gave a flashback of ‘Moon Lovers,’ with the distractive storytelling and unnatural acting of lead actors,” Choi Jung-a said on a forum.

Another viewer Han Jung Min thought that the first episode was not impressive. Although the story was a good one, the drama does not seem to have any impact except for the pretty faces.

70
SHARES
FacebookTwitter
SubscribeGoogleWhatsappPinterestDiggRedditStumbleuponVkWeiboPocketTumblrMailMeneameOdnoklassniki
Related ItemsHwarangKBS
← Previous Story America Is At It Again: New Korean Drama Remake To Be Aired On US TV Network For The First Time
Next Story → [Vote] The Best Korean Drama Of 2016 – Which One Is Your Fave?