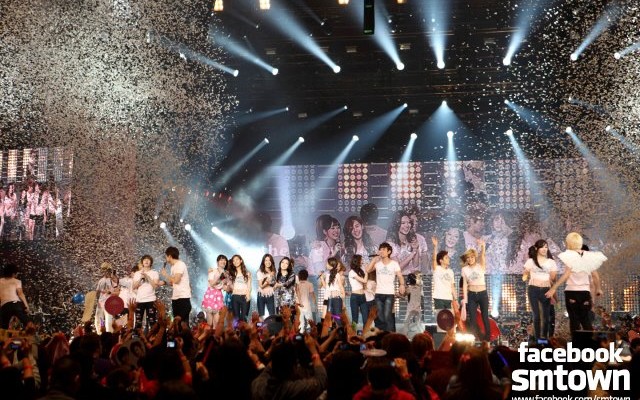 I can’t believe it: right now I’m sitting at home, revelling in my memories of SM Town Live in New York! It was an awesome show, and I got to go with some fantastic friends of mine (including CeeFu), meet up with some of the other people from hellokpop, and I even made some new friends. But most importantly, I got to see an amazing show with my friends, and now I want to share that experience with you.

SM Town puts on an amazing show. I was mainly looking forward to seeing SHINee and f(x), but all of the performers were outstanding: perfect pitch, great dancing, and some great twists on some of their most famous songs.

The concert opened with f(x), who sang their songs Lachata, Chu~, Hot Summer, and Pinnocchio to name but a few. Amber got a particularly warm welcome from New York:  fans (including myself) would scream every time she came forward to sing.

Sulli got to sing a duet with the legendary Kangta, where Onew made a small cameo. I’ve never heard Kangta sing before this concert, and he is a phenomenal singer. One of my favorite numbers from him was Breaka Shaka. And of course you can never go wrong with a nice, fitted suit!

Super Junior was great, even though they were missing quite a few members. To help fill-in for the missing members, they brought along Henry and Zhou Mi. With Zhou Mi they were able to sing Super Junior-M‘s Perfection (in Chinese!), and they had him rap to Don’t Don, which SuJu usually performs with Trax. Henry also performed an interesting solo in Don’t Don: he played the electric violin to fill in for the guitar on the song!

One of my favorite numbers of the entire concert was actually a performance by Super Junior-KRY. They were the first of SuJu to appear, and they sang Sorry Sorry Answer. I’m actually wondering where I can get that ‘version’ of Sorry Sorry – I liked it even more than the original version (which they also performed)! And, I have to say, Yesung was really working it throughout the entire concert. Eyeliner, fitted suit, skinny jeans – even from as far away as I was, I couldn’t keep my eyes off of him! Here’s a fan cam of it below:

SNSD was featured heavily throughout the concert, and they sang classics like Genie and Oh!as well as their newest single The Boys. Look for an editorial from CeeFu to hear more  – I know that she really wants to write about them!

Of course, I can’t forget about BoA. This was a very important concert for her, since she had previously debuted in the U.S. without as much success as SM had originally hoped for. Her performance was flawless, and some of the songs she performed were Hurricane Venus, Eat You Up, and Energetic. Just before the concert started, SM showed a preview for her upcoming U.S. movie Cobu which will be in theaters in 2012. She was really cute after her first number – she was talking to the crowd (in her fluent English) when she suddenly commented: “I just realized that my shorts are really short! I’m so embarrassed!”

SHINee was amazing! I had been hoping that they would perform Ring Ding Dong (which they did, with a lot of fire as a special effect!), but they also performed two songs that surprised me: Ready or Not and a heavy-metal version of A.Mi.Go. Key performed in one of BoA’s songs, and maknae Taemin had a dance battle with Eunhyuk, along with a few of the girls from SNSD. Oh, and of course they performed Lucifer!

They made us wait what felt like forever for TVXQ! They performed their current hits like Before U Go, Wae (Keep Your Head Down), and Maximum, but they also pulled off an amazing performance of Rising Sun. Changmin really caught my eye for those performances, showing off some of his chest with excellent strategic nakey.

SM also made a great move by having some of the artists perform American hits: Key and Krystal performed Ke$ha and 3OH!3‘s My First Kiss, and Krystal also sang Ke$ha’s Tic Tokwith her sister Jessica. This was a great move for their New York concert, since anyone growing up in the U.S. would know those songs and could sing along to them, no matter what their first language was or where they were from. That means that all the parents, boyfriends, and best friends who were dragged along to the concert could at least sing along to something familiar. Plus SM added in some of their Chinese songs, which made the show even more inclusive!

On top of that, SM played some videos that may seem kind of cheesy (although I loved them), talking about pursuing your dream, being a true friend, and how SM Town would ‘be a friend who knows your heart.’ The videos featured the artists speaking in Korean, with English text translating it, but the artists also used sign language in the videos, which means that they were even trying to include any deaf fans in the audience.

Ceefu, Nini from hellokpop radio, our friend BOOKitty and I were actually lucky enough to be in Koreatown where the idols were eating a very-late dinner after the show, and we got to see them leave the Kangsuh Korean Restaurant! Fun story: at one point, Shindong left Kangsuh, and we assumed that he was going to get into one of the cars that came for a few of the idols. Instead, a few of us saw that he ran across the street to a different Korean restaurant called Kum Gang San. Now, why he ran over to that restaurant, we don’t know – maybe they had better kimchi over there!

The ‘downs’ of the concert really had to do with the lack of organization and information. Granted, when a concert is designed to travel, there is always a degree of disorganization that goes along with it. The bigger the show, the more disorganized it can be – there’s just a lot to coordinate!

But it was disappointing that there wasn’t more information about when the idols were getting to the airport and where they might make appearances around the city. The United States K-Pop fans, just like all K-Pop fans, want to make the idols feel welcome and to thank them ahead of time for coming to perform, so without the information, there wasn’t a lot that we could do to welcome them to the city.

Also, there wasn’t a lot of information about fan meetings ahead of time. Now, SNSD is the only group that had a scheduled meet and greet with their fans (which happened on Monday, the day after the concert), but there were a few fan meetings that happened around the city that I didn’t even hear about until after they had already happened.

Selfishly, I also wish they had more merchandise for sale. They had some really cool, general SM Town merchandise like t-shirts and towels, even a light-up fan, and they had a few things for the artists like posters (made specially for the tour) and foam fans with their faces on them, but I would have loved to get some of their CDs, other posters, t-shirts, light sticks, and other fan merchandise for the individual artists.

I. Loved. This. Concert. All of the performances were great, even from the artists that I’m not all that fond of. The crowd was amazing – all ages, genders, races, coming together from different places (Chicago, California, even a radio listener from The Netherlands) to enjoy their music.

You know, after this concert, I really feel like SM is a lot like Disney: people can make fun of the cheesier concepts that come out from them, people can concentrate on the negative aspects of the company (which definitely exist), but at the end of the day there is something about them that really is… magical. Go ahead and laugh, I know that sounds silly to say. There is a sense of unity between the different groups under SM Entertainment: they don’t just put on a show, they actually look like they have fun with it and enjoy being around each other.

The concert ended with a song, sung by all the idols together, about friendship and perseverance, sticking with your dreams no matter what anyone says and keeping people close to your heart. Normally, I’d want to laugh at that sort of cheesy finale – but not this time.

When the concert ended – when the paper confetti settled and the last idol (Leeteuk) left the stage, when the house lights came on and everyone started gathering their stuff, I cried. I cried like a kid after the Light Parade who has to go home and leave the Magic Kingdom. And it’s embarrassing when I cry, because I do not look pretty while I sob. Think Jonghyun crying back in 2008, only not adorable:

But I didn’t care. I cried when it was over, because it was so much better than I ever thought it would be.

That was my first K-Pop concert ever, and now I just want more! I can’t got to the K-Pop Masters coming up in Las Vegas, but if it’s anything like SM Town was I hope that everyone who goes will experience just how great a K-Pop concert can be. When’s the next concert?!

Keep an eye out for more about SM Town Live in New York right here on hellokpop!