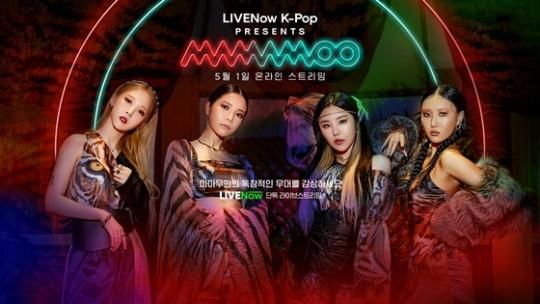 MAMAMOO to take the stage as the first Korean artists to appear in UK’s “LIVENow Special Live”!

MAMAMOO will become the first Korean artists to grace the stage of UK’s “LIVENow Special Live”. The group will collaborate with the global streaming platform as the featuring artist for the special stage titled “LIVENow K-Pop presents MAMAMOO”, occurring on May 1.

The special stage will display MAMAMOO’s historical hits over the seven years since their debut, in a New York-themed studio.

Furthermore, the stage will feature a variety of backgrounds and concepts previously unseen from MAMAMOO’s online performances. Additionally, fans can look forward to realistic scenes of the group’s rehearsal and performance.

LIVENow, the event’s broadcasting host, is a global streaming platform that has catered to a wide range of fans. The platform previously hosted different sports and comedy events. It also hosted musical performances of globally renowned artists including Dua Lipa, Maroon Five, Gorillaz and Ellie Goulding.

Currently, LIVENow expanded its focus to providing a series for K-Pop lovers. In partnership with Korea’s TR Entertainment, the platform will cater to K-Pop fans and broadcast more K-pop performances, displaying the genre’s mainstream appeal in the global music market. The streaming platform chose MAMAMOO as the first artists to appear in one of their hosted events.

In regards to the decision, LIVENow stated, “MAMAMOO has maintained their own unique style since their debut in 2014 with their energy, soulful vocals, and confident attitudes. They have become a leading female group in K-Pop not only as a group but also in their successful solo careers”.

“LIVENow K-Pop Presents MAMAMOO” will air to global fans on May 1 in Europe, America, and Asia. Ticket reservations for Korean fans began on Interpark on April 9.

Meanwhile, tickets are available for global fans on LIVENow’s website.

FacebookTwitter
SubscribeGoogleWhatsappPinterestDiggRedditStumbleuponVkWeiboPocketTumblrMailMeneameOdnoklassniki
Related ItemsMAMAMOO
← Previous Story BTS Remains As Only Act To Chart On Billboard Global Excl. U.S. In 3 Languages
Next Story → THE BOYZ Sunwoo Gifts Fans With A Self-Composed Track On His Birthday