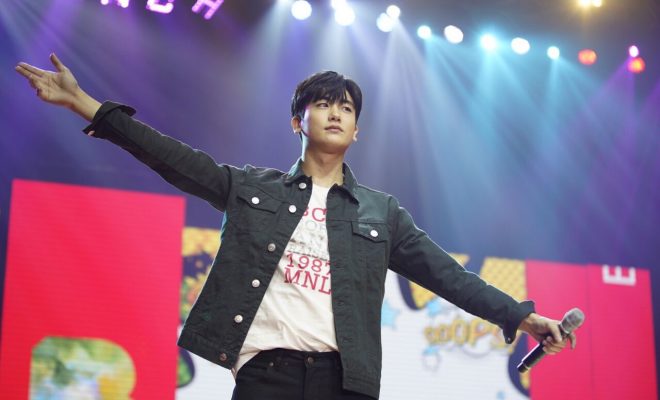 Dating over 7,000 fans on a post Valentine’s weekend night seemed to have been a piece of cake for Park Hyung Sik!

In festive mood and love month spirit, Philippine fans got more than what they asked for at BENCH Park Hyung Sik Fun Meet on February 16. 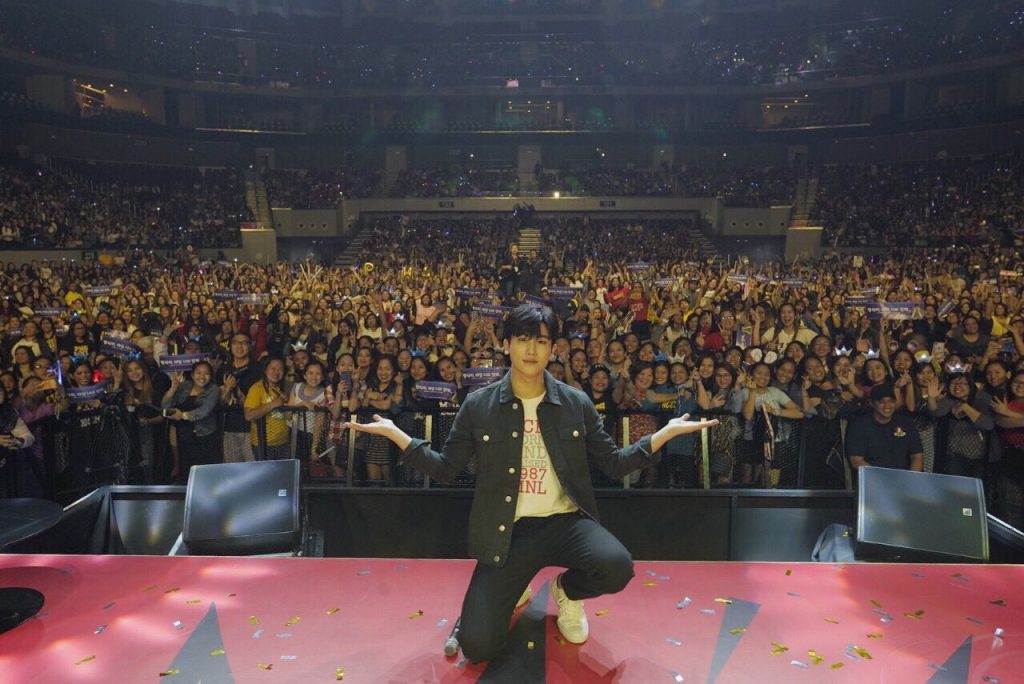 Organized by lifestyle and clothing brand BENCH, the actor delighted the crowd at Mall of Asia Arena in the Philippines, with his upbeat attitude in enjoying the moment of creating happy memories with his fans.

Thunderous cheers enveloped the arena to the rafters as Park Hyung Sik set the mood for the night with a sweet serenade. Fans in attendance had the same blissful look on their faces as they finally met their favorite Korean actor.

In case you missed it last night, here are the sweetest highlights of BENCH Park Hyung Sik Fun Meet!

Enjoying the lively atmosphere, Park Hyung Sik made sure to greet all his cheering fans in the venue after singing “I’ll Be Here”, an OST from his drama Hwarang. Successfully getting onsite fans under his irresistible spell, the actor sat down to answer questions that all his followers are curious about.

Park shared that Strong Woman Do Bong Soon and Hwarang are his most memorable dramas. Responding to his healthy routine inquiry, he revealed how he loves scuba diving, and also likes fishing. Moreover, he shared that keeping his body fit is a goal he prioritizes to return the love from his fans.

Adding fuel to the clamor of fans who are still not over Strong Woman Do Bong Soon craze, he mentioned Park Bo Young as his favorite artist along with the rest of actors he has worked with in projects he starred in. 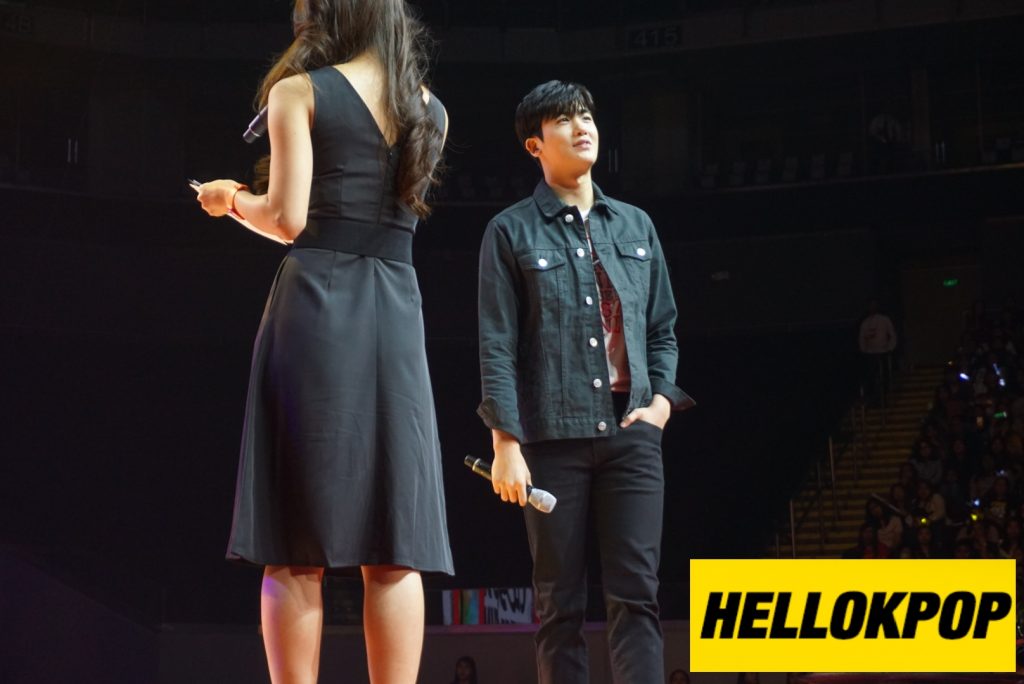 Feeling grateful for meeting his fans through his campaign with BENCH, Park Hyung Sik expressed gratitude with the opportunity to be part of the brand team. When asked about his first impression with the lifestyle brand’s CEO Ben Chan, he shared that at first he felt scared, but when Ben Chan smiled, he felt at ease with him.

The actor thanked BENCH for bridging an opportunity to meet his Filipino fans so he could share a beautiful memory with them. Additionally, he promised to gift his supporters new exciting projects in the future.

As a successful actor with idol roots, Park Hyung Sik revealed how performing has been what he likes to do for as long as he can remember so he does not have any other dream aside from being able to sing and dance. Not picky on food, he said he enjoyed all the food given to him when he arrived in the country.

Prying on how he prepared to engage with his fans, the host asked if he had learned any Filipino phrases. Knowing how to make the audience melt, he said “Mahal Kita”, a phrase which means “I love you” in English.

It took a while back for all the souls of all the love crazed attendees to get back to reality after he said it. They unitedly shouted “saranghae” (we love you) to their favorite oppa, who responded “Na Do” (Me too) — and that cute interaction almost broke the venue down with the loud cheers.

Part 2: What fans want to know about Park Hyung Sik

For the second segment of the program, the idol-actor delighted fans with his cute flirty side knowing how to charm them.

Bohol is a place he wants to visit in the country if he will be given a chance. The host even suggested to visit Chocolate Hills and scuba diving in the mentioned tourist destination.

When asked of his pastime, he lingered to answer, and endeared the audience when he answered thinking of his fans and keeping them in his heart is what he loves to do.

The next question on his ideal girl type sent all the girls in loud frenzy, when he said that he likes girls with loud voices. It led to five seconds of deafening fan girl screams from the crowd.

A glimpse of Elisabeth

Eager to please fans, Park Hyung Sik gave a sneak peek of his character in the musical Elisabeth. And “wow” is an understatement for his impromptu performance.

Last night, #ParkHyungSikForBENCH made our hearts full with #ParkHyungSik! Here's a glimpse of one of the many talent showcases he gifted his fans at BENCH Park Hyung Sik 'Fun Meet'! Stay tuned for our recap. Special thanks to @benchtm for the invite to the event.

When the host suggested an encore, Park obliged and awed the audience with flawless belting of a song from his musical.

Three lucky pre-selected contestants played a game by racing to where the artist was. They answered trivia questions about their favorite Korean actor.

From personal information, drama details and other projects, Park enjoyed playing the game. But when the questions got harder, he was also struggling to answer some of the questions to the delight of his fans.

“Me too, I don’t know the answer”, he said when a question was raised about the title of the song of a music video he starred in. His smiling confession earned laughter from the fans.

He also cutely chided the crowd when they were coaching the contestants as the race got more intense.

Two girls eventually won and received not just a handshake, but a hug from the actor. He even went to send off the non-winning contestant reflecting his kind nature. The winners thanked him for making the Filipino fans happy. 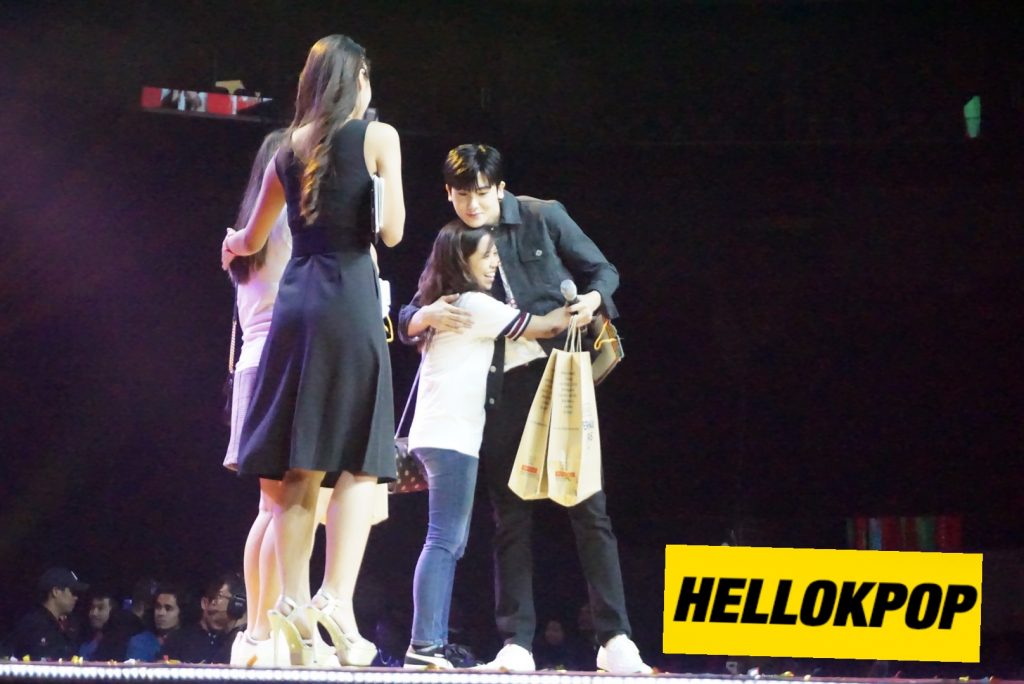 For the next game, giant balls were thrown out to be passed on in the venue and it was up to Park Hyung Sik’s “stop” signal, which would determine the winner.

We couldn’t help but notice how he looked advertisement ready in these photos from that segment. 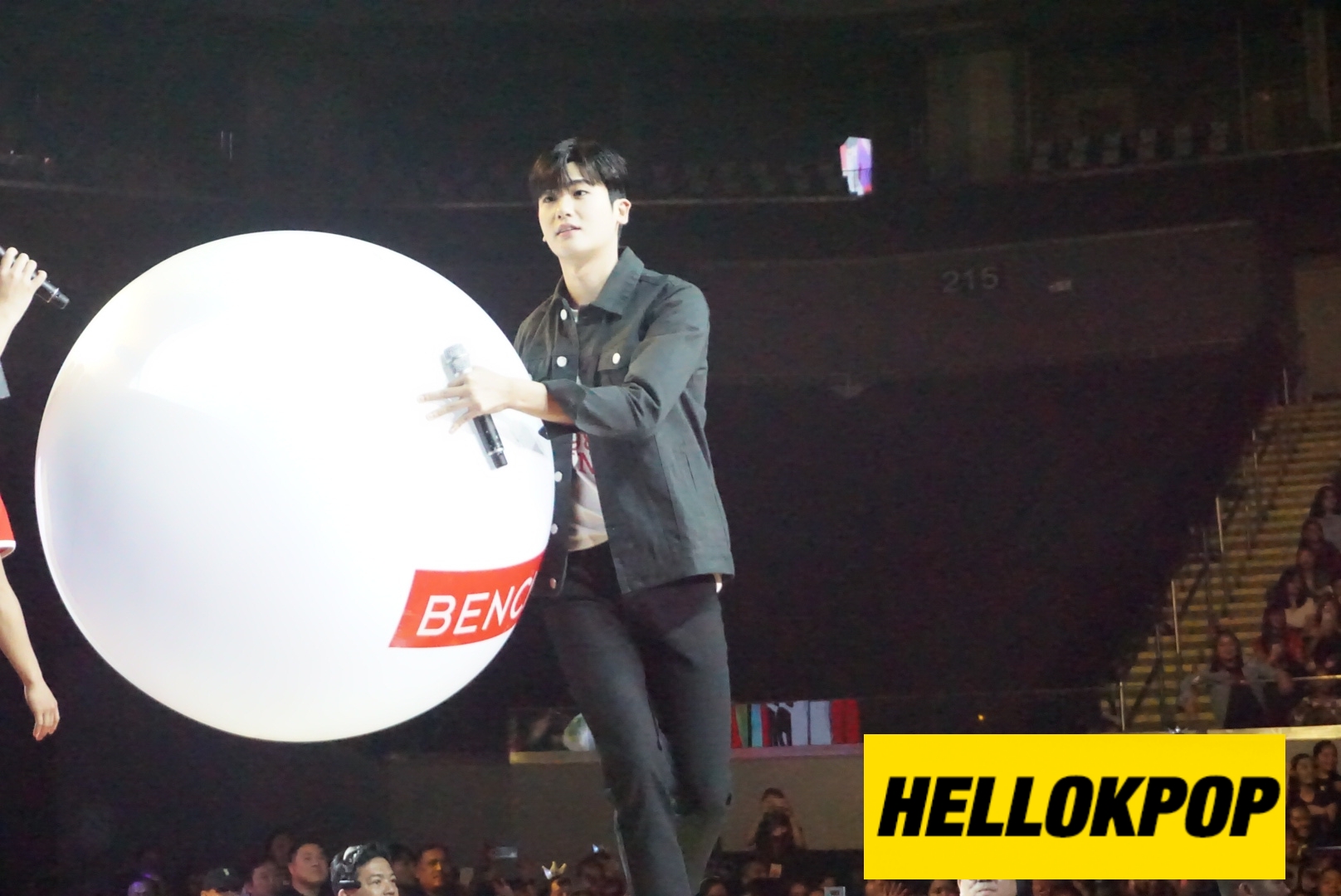 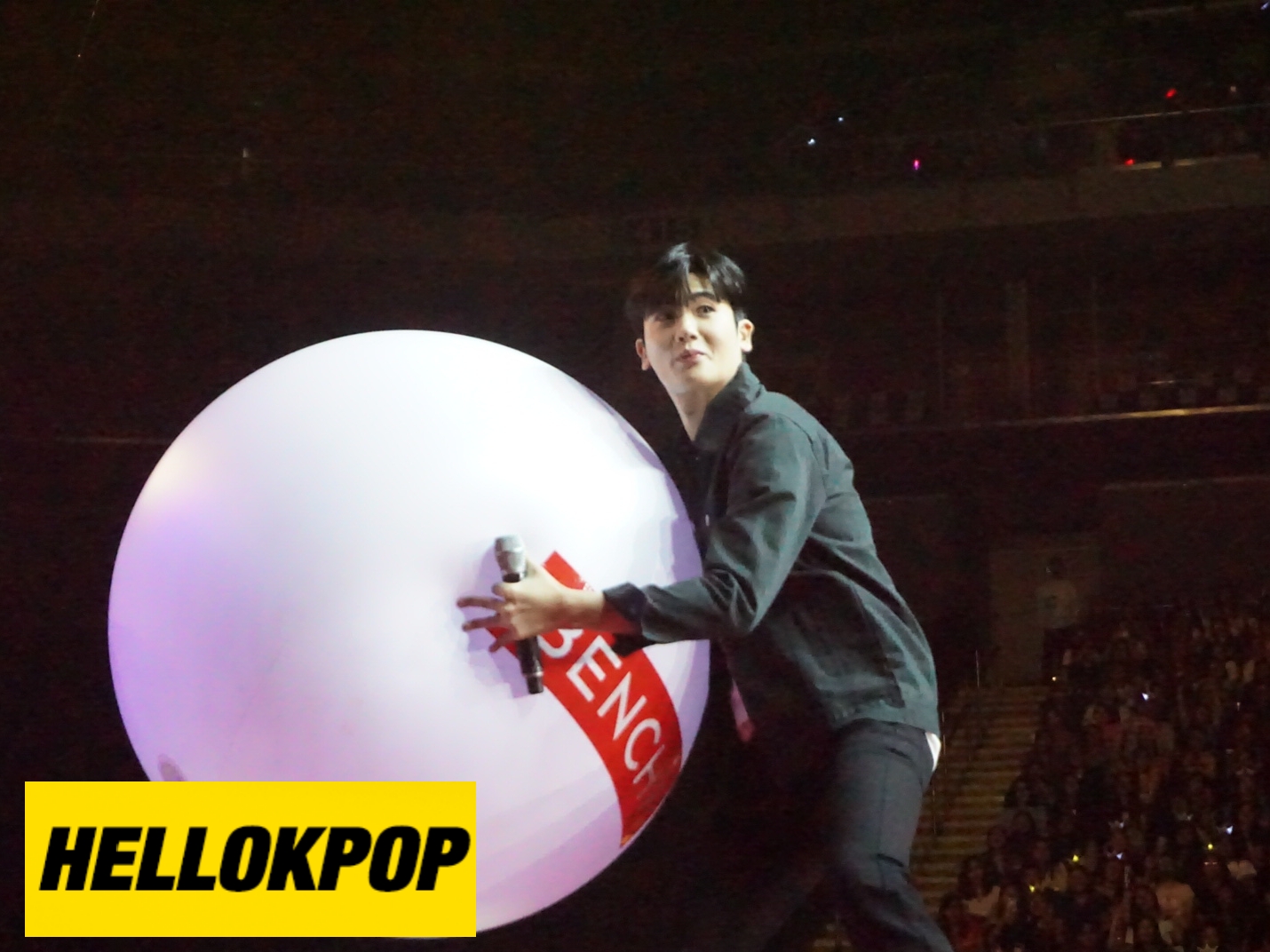 Last game had all the fans participate in getting an opportunity to speak with the actor over the phone.

Out of 7,000 onsite fans, a lucky woman had the chance to converse with the actor, who asked if she had dinner already. He further inquired if she missed him and if she was seeing his finger heart.

The lucky winner was escorted to the stage to personally meet the actor, and revealed that she was actually with her nieces, who are avid fans of the actor. Not hesitating on the request to greet her nieces, Park Hyung Sik agreed with a smile. 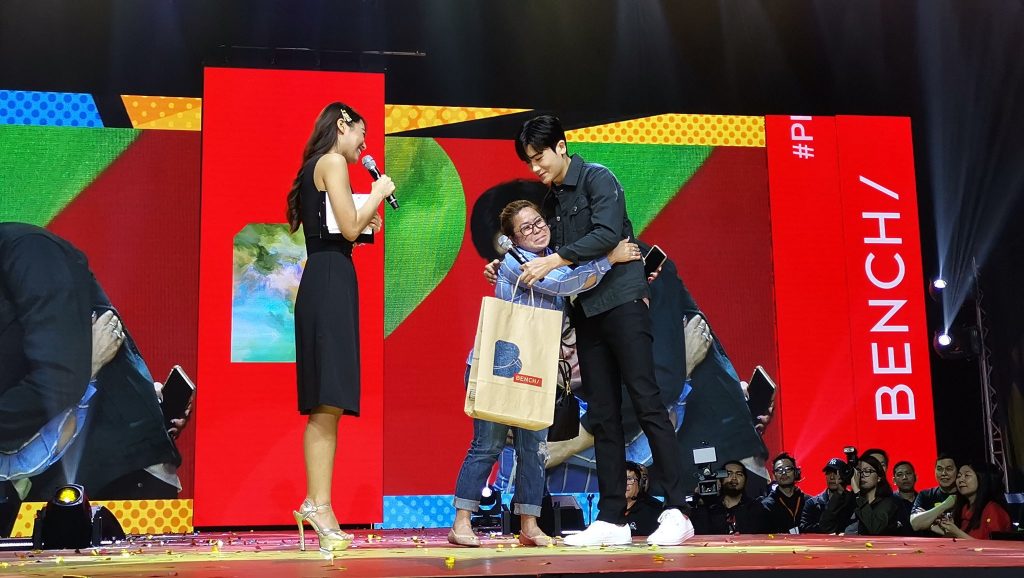 From learning some local phrases from fans, he returned the favor by teaching some Korean useful phrases.

He specifically point out a Korean phrase, which means “Please give me discount” as one of the things his fans should learn about. In addition, he gave a key point of layering it with aegyo to seal the deal.

Fans taught him another phrase, when Park said “I Miss You” in Korean by giving the translation in local language. “Miss Kita” had the female dominated audience reached sweet oblivion when the dapper artist muttered it.

Approaching the end of the program, Park posed for a selca with the elated fans. Thanking his fans for an amazing night, he said he would go back to Korea with a happy heart because of the memories he shared with them. 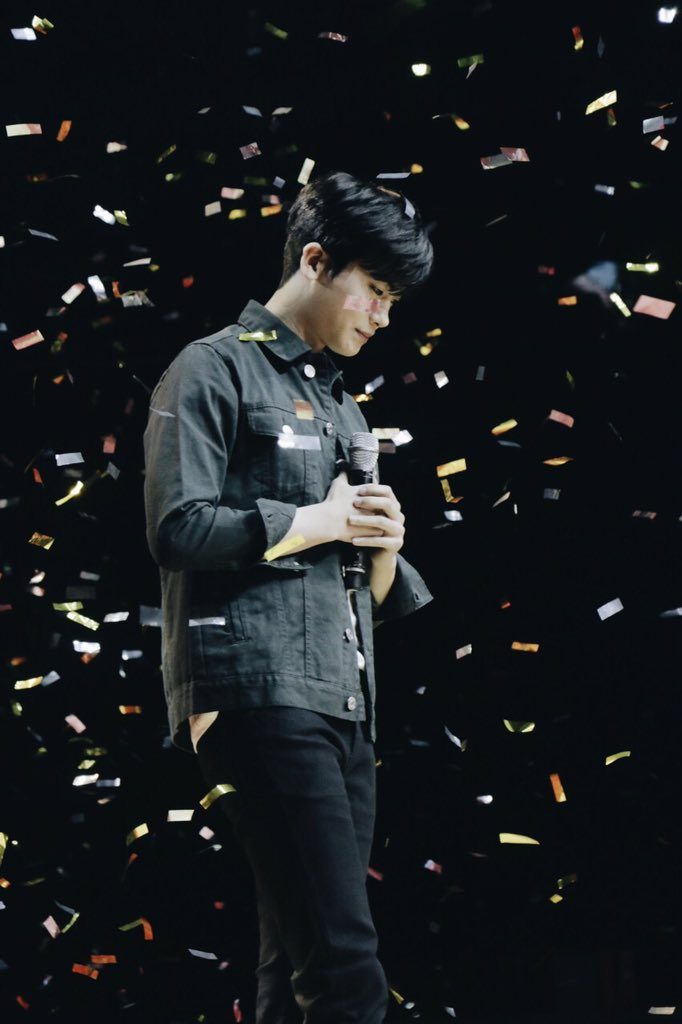 Featuring facets of the actor-singer in a complete program, BENCH Park Hyung Sik Fun Meet was an absolute success. Stripping the casual side of the actor, he genuinely poured in his smiles to the vibrant audience.

From the sweet serenade to sudden talent showcases and revealing his comfy side, it was a collective mutual encounter that Philippine fans of Park Hyung Sik will surely remember.

Hellokpop extends gratitude to BENCH for the invite to the event.

We all fell in love with #ParkHyungSik at his 'Fun Meet' earlier at SM MOA Arena.

From serenading us with his sweet voice and casually sharing his laid back side, he created a memorable night with over 7,000 fans in attendance.😍#ParkHyungSikForBENCH #GlobalBENCHSetter pic.twitter.com/xdZ418FTpC

Hellokpop, as an independent Korean entertainment news website (without influence from any agency or corporation), we need your support! If you have enjoyed our work, consider to support us with a one-time or recurring donation from as low as US$5 to keep our site going! Donate securely below via Stripe, Paypal, Apple Pay or Google Wallet.
306
SHARES
FacebookTwitter
SubscribeGoogleWhatsappPinterestDiggRedditStumbleuponVkWeiboPocketTumblrMailMeneameOdnoklassniki
Related ItemsPark Hyung SikPark Hyung Sik For BenchPark Hyung Sik Fun Meet In Manilapark hyung sik in manilaPark Hyung Sik in Manila 2019
← Previous Story NCT Dream, NOIR, And APRIL To Headline “2019 K-POP Friendship Concert In Manila”
Next Story → The Boyz To Leave Fans Gasping For Air On Their Return To The Philippines With “The Castle” Concert