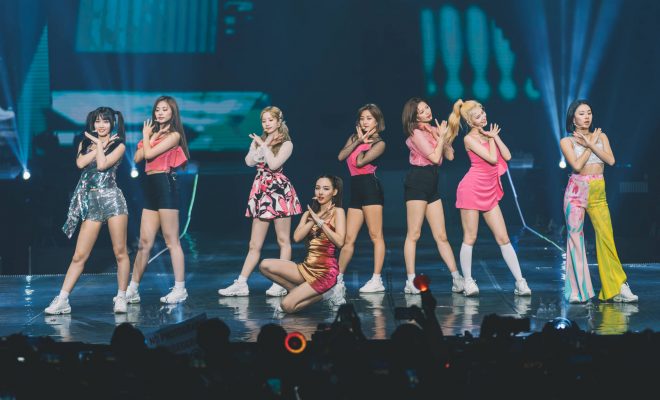 Singapore ONCEs cheered up with Twice as they fancy every bit of their performance – and goes TT with the girls as they expressed how they miss Mina.

Singapore ONCEs waited for a year to finally see their favorite girls once again. Although Twice performed with eight members, they still give their 100% showmanship keeping their spirits high throughout the show. 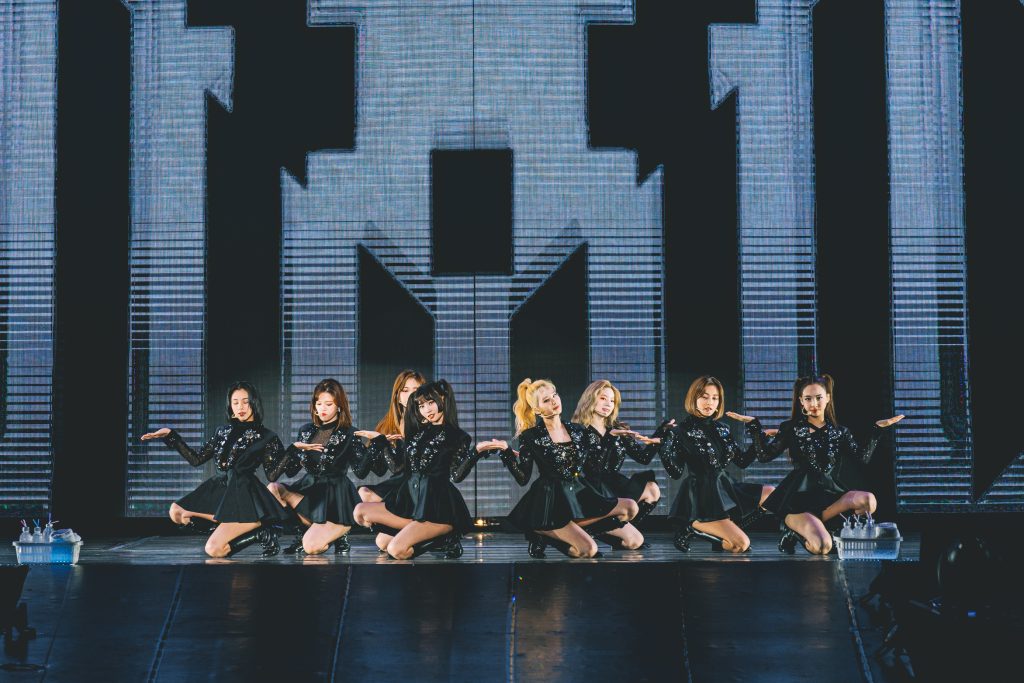 Twice World Tour 2019 kicked off to a successful two-day concert in Seoul, followed by Bangkok and Manila. However, as the day draws nearer to their Singapore stop, a sad announcement that Mina will be dropping out from their activities due to health issues.

Join us as we reminisce the concert highlights at TWICELIGHTS In Singapore.

The Fiery And Explosive Start

Performing their first song, “Stuck In My Head”, the girls emerged to the stage to welcome their adoring fans. Garbed in all-black and glittery outfits, Twice continued to raise the energy at the hall with a medley of “Touchdown” and “Cheer Up”.

From their energetic start, the girls individually greeted the crowd with fervor. Hinting a few  special stages prepared, Twice did not hold back in highlighting their different colors. Moving on, they engaged with the crowd through “BDZ” as they hit the center stage. Filling the arena with the attendees’ roar, “Yes or Yes” has had the audience sang along with the girls.

Pushing the energy level higher, the place transformed to a party stage. With that, the girls changed into a much sexier and relaxed outfit as they powered a Jackson 5 cover of “I Want You Back” plus “Dance The Night Away”. The medley kept the crowd on their feet while grooving and chanting to the music. 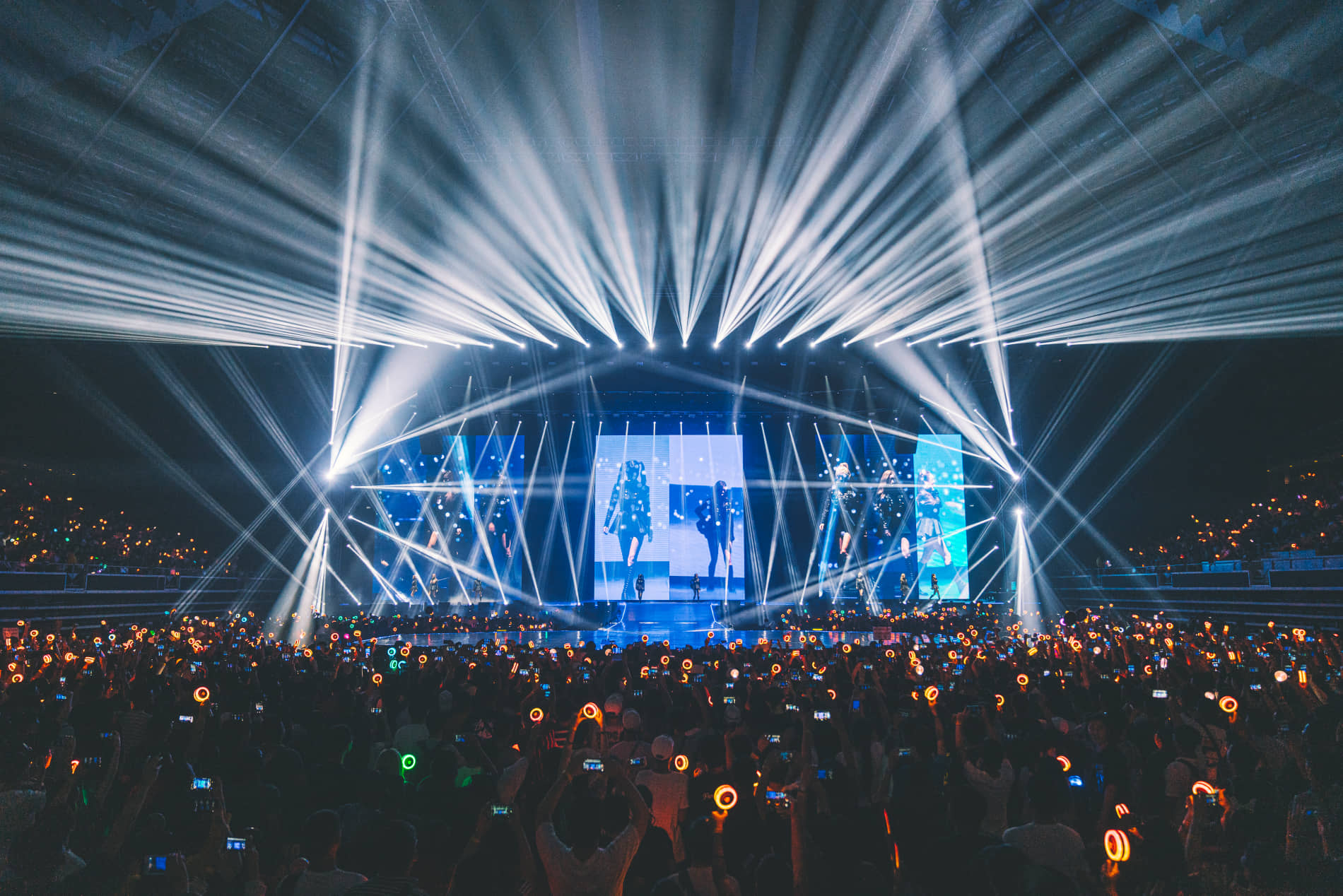 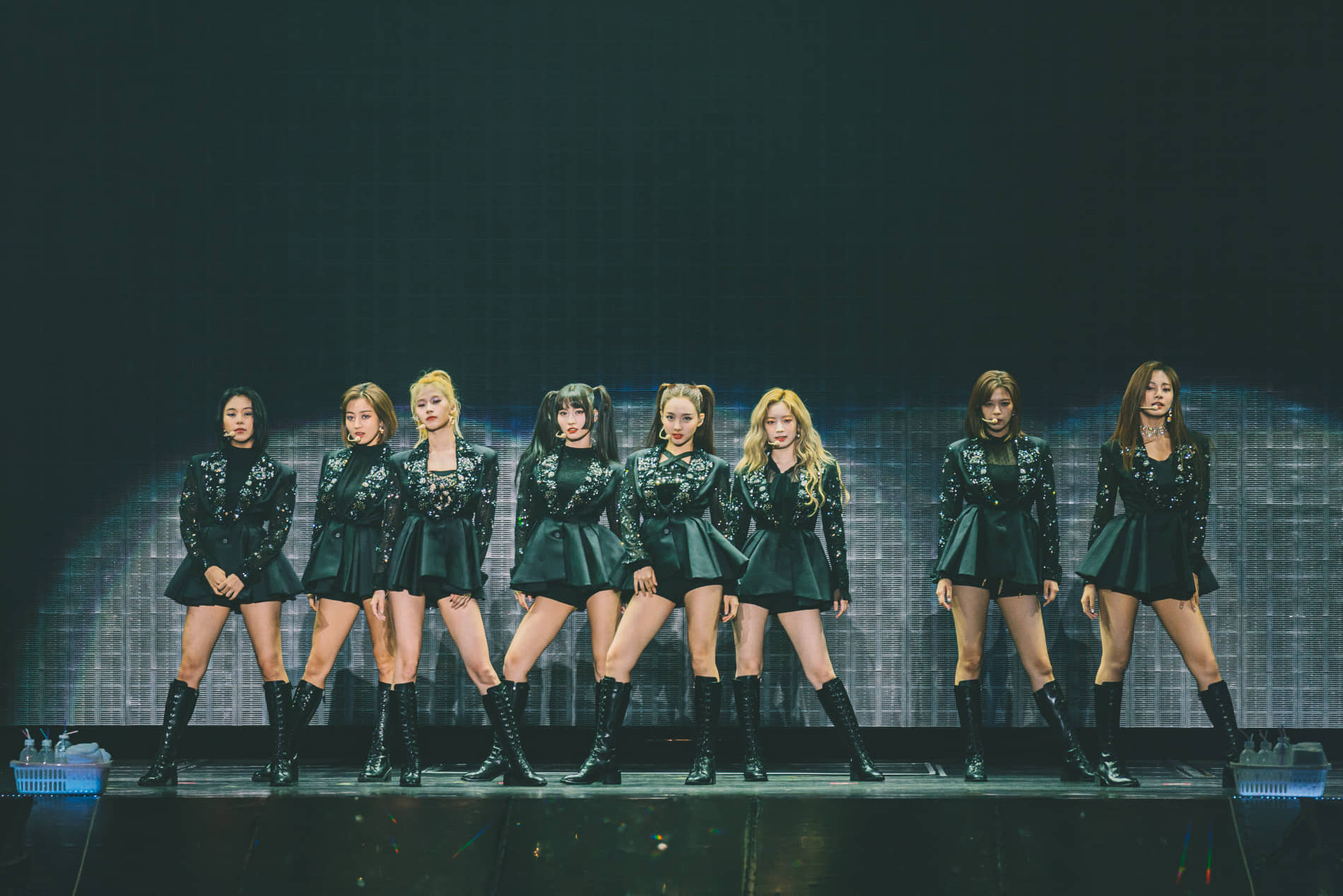 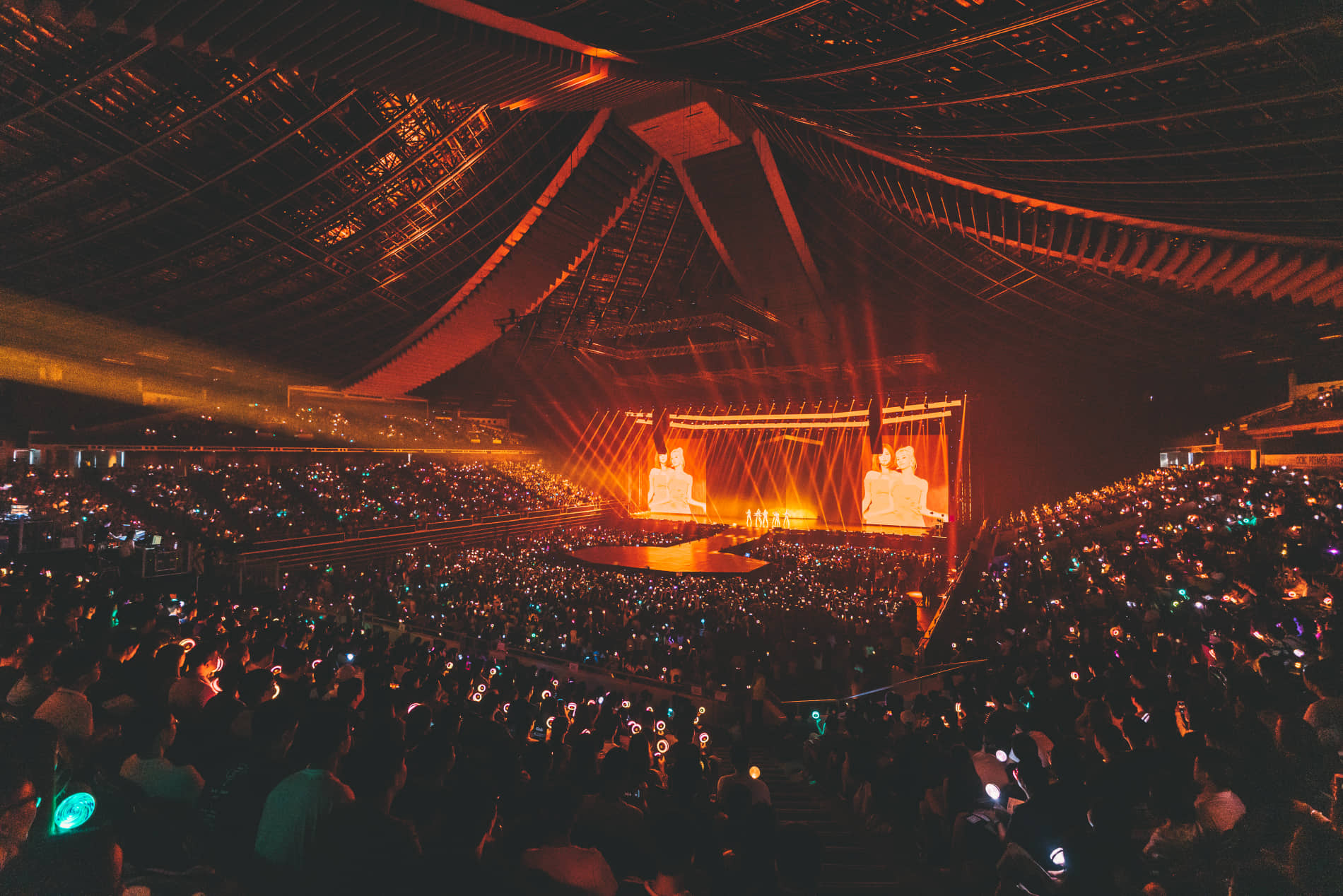 After the intoxicating first part, Nayeon, Jeongyeon, Momo, Sana, Jihyo, Dahyun, Chaeyoung, and Tzuyu came out all dressed in white like lovely angels on stage. This time, they showed off more of their singing ability and serenaded the crowd with “After Moon”.

As the girls sing ” Here In My Heart” the crowd raised their phone lights and swayed along with the music which set a sentimental mood in the arena. The girls, finally had time to come closer with the audience and waive to them at every corner of the stage as they perform “Sunset”.

Closing their second set, the girls performed a ballad of “Heart Shaker” with a montage of the girls’ video displayed in a fierce red theme.

READ: TWICE’s Dahyun To Also Sit Out From Group Event Along With Mina Due To Health Issues

The Fierce Yet Sweet Stages

Transitioning from the intimate ballads, the girls came back in a crimson red setting adorned by sweet and groovy sounds. Twice spoiled their fans with music beats starting off with “Heart Shaker”, followed by candied tracks, “Strawberry” and “Welcome To My World”.

Marking their territories, Twice gifted a downpour of talents in the sub-unit stages. Shifting to their usual cute girly dance, Tzuyu, Dahyun and Sana slayed their cover of Beyonce’s “Dance For You”. Clad in blue themed outfits, Ji Hyo and Momo followed with a powerful dance cover of Taemin’s, “Goodbye”.

Capping off the dance cover ride, Chaeyeong, Nayeon and Jeongyeon showed a girl-power rendition of Lady Gaga’s “Born This Way”. Shining in their silver suits, the girls showed their confidence with powerful dance numbers leading the crowd to sing for them in chorus.

Jihyo and Momo performed Taemin's "Goodbye" for the 2nd special stage. MINA was supposed to be with them, we miss her but we want her to be well. Nevertheless, they both did an awesome performance.#TWICE #TWICELIGHTSinSG pic.twitter.com/Ldzsn02yy1

Of course, Twice concert will not be complete without them performing their classic favorites. Without breaking the crowd’s heightened excitement, they reeled the audience through their hit tracks, “Likey”, “What Is Love”, and “Like OOH-AHH”. Crowning the memorable night, the crowd went on a frenzy when Twice exploded with “TT” and “Fancy” stage.

With Mina unable to join the tour, Twice became emotional as they bid their last messages to their fans. Twice member, Sana assured ONCEs that Twice will always be on their side and wished for all to stay happy always.

Each members give their speech and emphasized on giving hope that they will comeback together as nine members.

Indulging the fans who can’t get enough of the their favorite K-pop girl group, Twice gifted them with two more songs to cap the night off and to send them home with wonderful memories. In their encore stage, the girls sang “Knock Knock” and “Stuck” as they continue to interact with the fans.

Shining brighter whenever they are with their fans, Twice made sure that Singapore ONCEs felt their sparkling warmth and love. 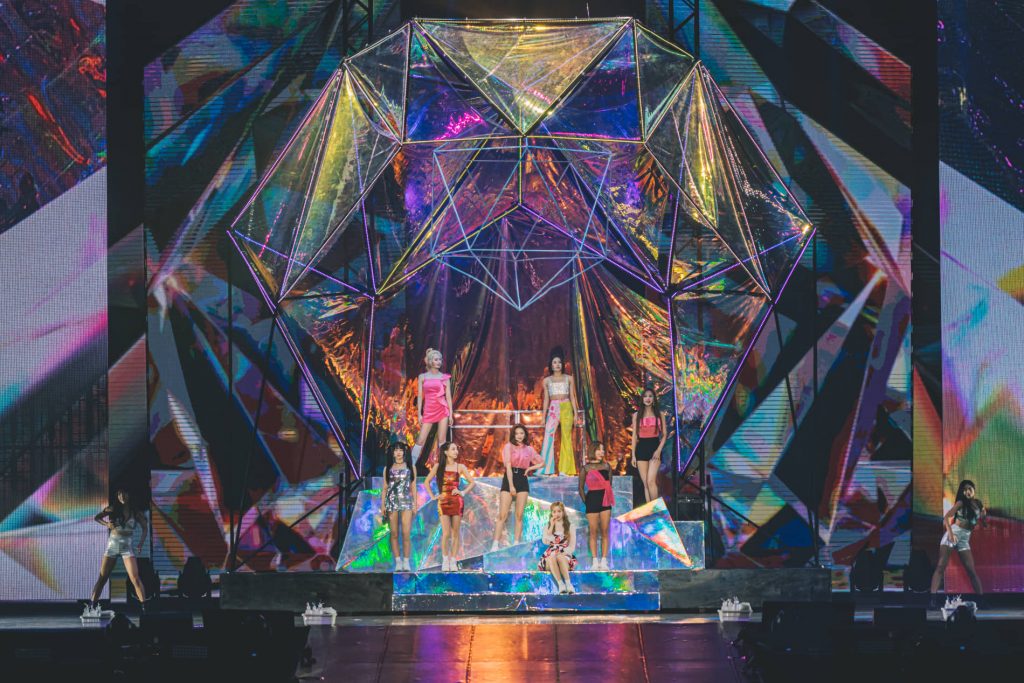 Twicelights In Singapore is brought to fans by  JYP Entertainment, Live Nation Singapore & One Production