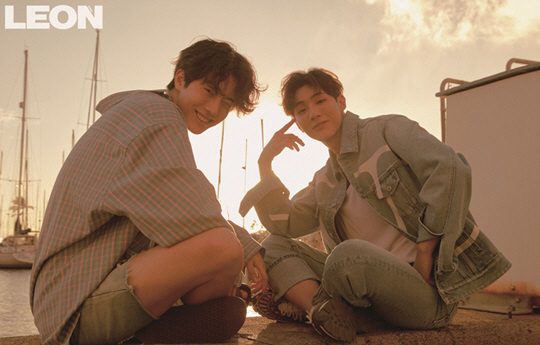 The JooHyuk-JiSoo visual combination is coming! LEON Korea, a male fashion and lifestyle magazine, has revealed the exciting news on April 18.

Known for their captivating looks, the two actors are effortlessly making everyone’s hearts flutter with their photos.

In the first poster, the visual best friends resemble each other with their subtle gazes and slightly wavy hairs while sporting their suave suits.

Aside from the previous half-body shot, Nam and Kim are also overflowing with model aura in the next photo. Elegantly walking in the streets of Hawaii, the two were able to showcase their obviously charming tall figures. Mesmerizing everyone not just with their chic vibes, the Korean stars then graced the third photo with a more casual look partnered with their playful smiles. Not only showing bromance in the sun-dappled photoshoot, Nam Joo Hyuk and Kim Ji Soo has also shared the journey of their growing friendship.

In a recent interview for LEON Korea, Nam happily recalled a previous vacation he had together with Kim. Among the fond memories they had while traveling the beautiful island of Jeju, Nam considered the food bonding as his favorite part.

“I have great memories of our food-themed trip to Jeju Island,” he said.

Kim also revealed how important time is for them to stay connected by saying, “As we gradually spent more and more time together, we each figured out what the other likes and dislikes, so it feels even more comfortable traveling here in Hawaii together.”

Additionally, the two even expressed how thankful they are to have each other’s back.

“Frankly, it’s rare to have a relationship where they can do this, but we tell each other honestly whether something the other did was good or bad. We’re really grateful to each other and thankful for this friendship,” said Nam.

Aside from their work, Kim shared that they also talk about other things. “We also recommend songs to one another, and we talk to each other about lots of different things,” he added.

What is next for the two?

Fans should also look forward to watching the two actors again in their respective drama projects.

Currently, Kim Ji Soo is starring in the new Netflix drama My First First Love, which is set to be released today.

Meanwhile, Nam Joo Hyuk is confirmed to star in Joseph, the Korean adaptation of the Japanese movie Josee, The Tiger, and The Fish. Moreover, he will join another Netflix original series School Nurse Ahn Eun Young in 2020.