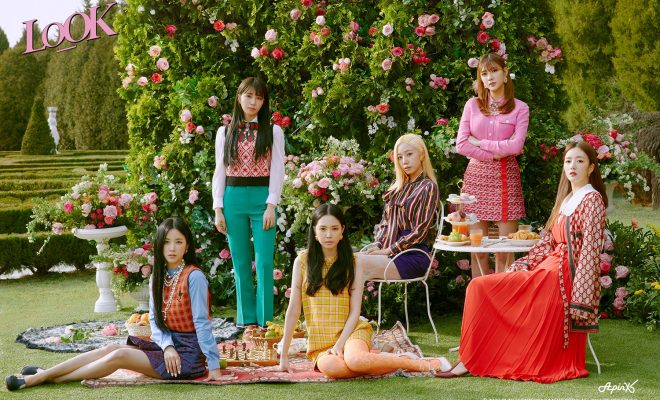 Apink is here to get your hearts racing! Draped in colorful setting, they bare their individuality in a playful and unique way. 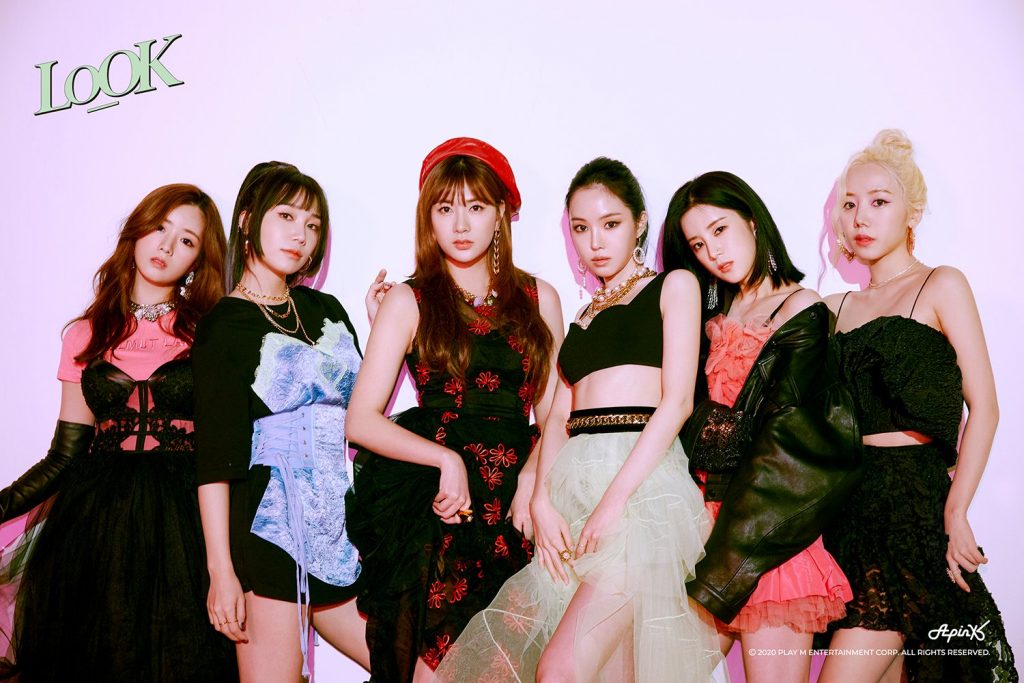 Apink kickstarted the preparations of their comeback when they announced their upcoming album on March 31, revealing the title of their ninth mini album as LOOK. Along with its release date of April 13, is an image that also served as an announcement for the dates of their promo schedules for the album.

Apink gave a glimpse of their album through concept pictures that displayed the group’s prismatic concept. The members showcased a fresh look amidst pastel backdrops.

The group further released a highlight medley on April 10, introducing the tracks on the album via small snippets.

LOOK is composed of seven tracks. The album does justice to the concept of the comeback and is a testament to the talents of the members as they shine in this album with their rich vocals that harmonize in synchrony with the arrangement of the tracks.

“Dumhdurum”, the mini-album’s title track, is a very fresh, peppy number that is sure to make you get up on your feet and sway to its catchy beat. The composition comprises of an upbeat dance tunes. But it is the placement of the bass beat, each time the word ‘dumhdurum,’ is played, which made it more interesting. It was smartly used to express the sound of a beating heart. The girls sound like a dream on this song!

“Yummy” is a very cheeky track on the album that will surely give you those ‘chill’ vibes. This synth and EP driven track talks about wanting to feel that sweet love from your lover. The style of the track is quite sexy especially with the members’ breathy vocals that give it an oomph factor. 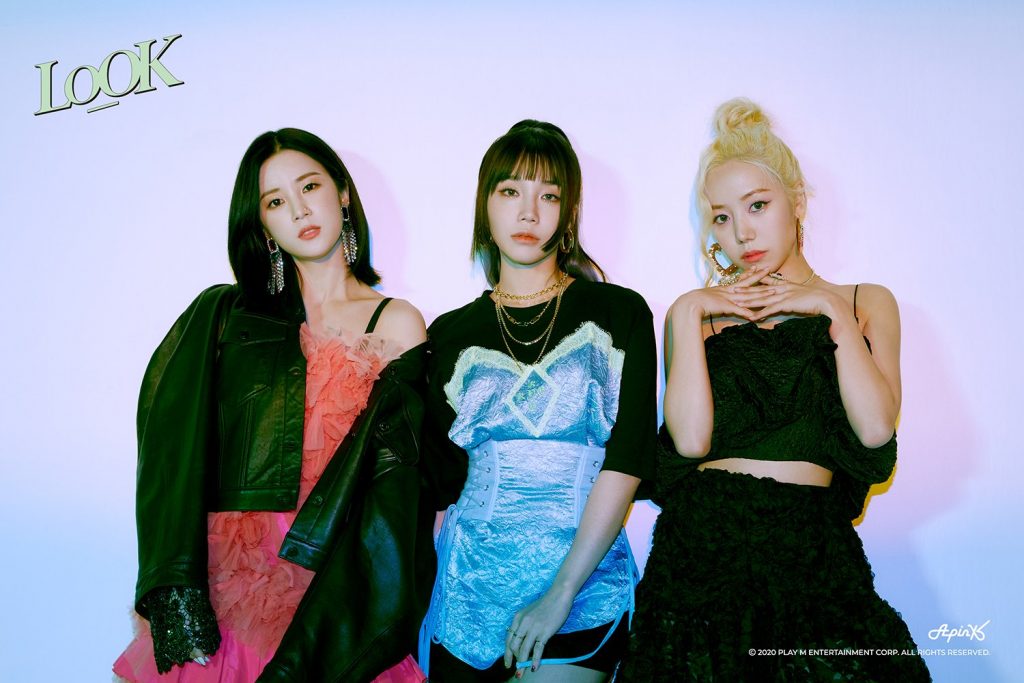 The track featuring the ‘JuJiRong’ unit composed of members Namjoo, Eunji and Chorong, “Be Myself” is a rhythmic, feel good track with a very introspective message at its core – of finding oneself after losing yourself in a toxic relationship; and having the courage to walk away from it. The trio really shine through on this number.

You’d be screaming yes for YOS as Bomi, Naeun and Hayoung tell you why “Love Is Blind.” The song has a very youthful mood to it especially with its bass driven arrangement mainly led by drums which makes you want to play this track on repeat. 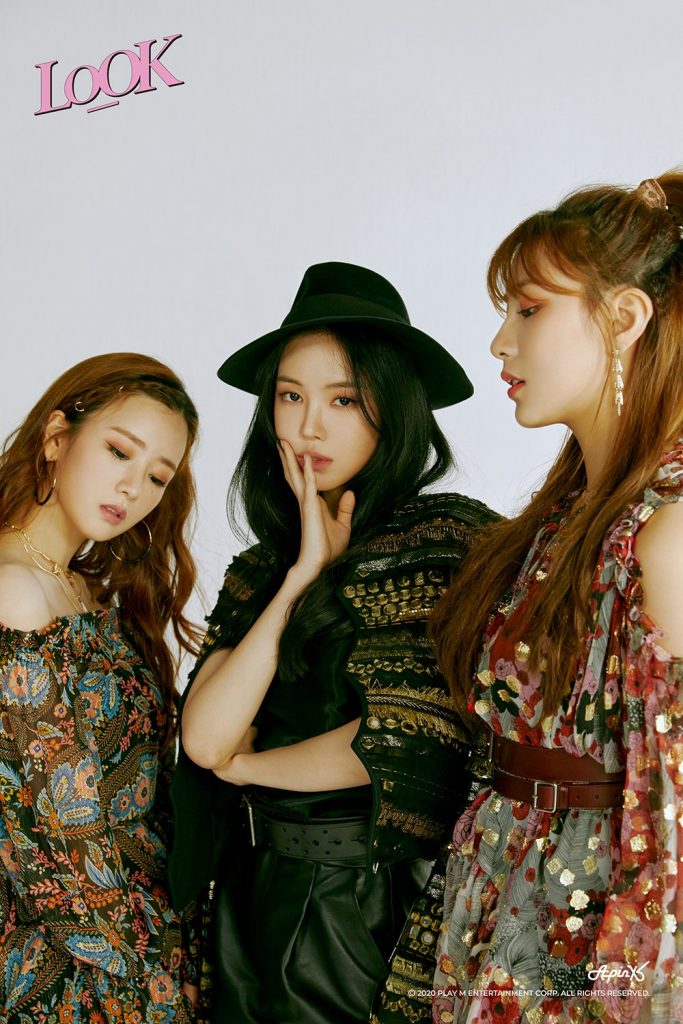 “Overwrite” a soft ballad-like track takes you on a nostalgic ride with its soft piano and guitar tones. The melancholic track delves into the emotional rumination about heartbreak and love.

Penned by Chorong, “Moment” is a heartfelt track that explores the feelings of when one reminisces about beautiful memories and precious promises. The song has a very cinematic feel to it with its orchestral arrangement. Definitely a number that will tug at your heart strings.

“Everybody Ready” is an energetic track written by Eunji. It is anthem like with its brass and bass sounds plus amplified guitars. The song was released last year on the anniversary of their debut for their fans.

The latest Apink comeback certainly roused curiosity after the teasers announcing the title track came out.

It is safe to say that the MV for the title track “Dumhdurum” did not disappoint and was a musical and visual treat! Apink look sensual and stylish in the video amidst an aesthetic pastel set.

It explores themes such as loneliness and denial especially with its depiction when even though the members are in colourful, grandiose settings, they are distant. However these feelings remain conflicting in nature; as on one end they talk about being fine, whereas on another end, they express that they feel sadness and miss their lover every night.

The chorus though, is somewhat of a declaration of moving on from a toxic love as they (seemingly) tell an ex lover their goodbyes.

The video does a stunning job of portraying these feelings through its imageries such as the flashing lights representing their heartbeats. The members looking into the mirrors show that maybe they’re looking within themselves as if trying to get in touch with their feelings and the setting of the train represents that they are bound to move on.

FacebookTwitter
SubscribeGoogleWhatsappPinterestDiggRedditStumbleuponVkWeiboPocketTumblrMailMeneameOdnoklassniki
Related ItemsAPINKApink comebackApink LOOKDumhdurum
← Previous Story AOMG Makes Generous Donation To COVID-19 Efforts With Their Online Charity Concert
Next Story → A.C.E’s Byeong Kwan And Chan Express Feelings Of Wanting Someone Back In OST For “How To Buy A Friend”