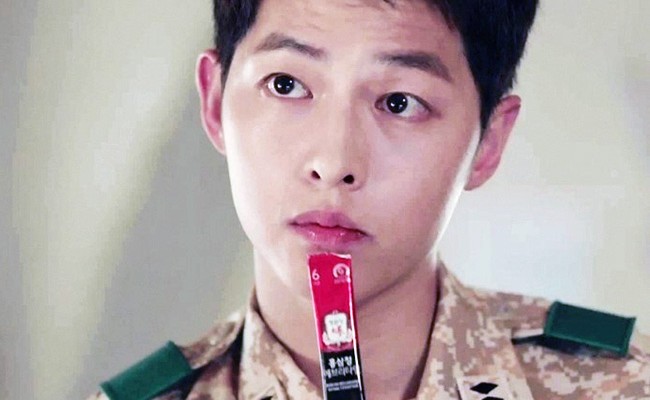 The Rise Of Song Joong Ki And … The Red Ginseng

All hail to the Mighty Red Ginseng.

In the current hit drama ‘Descendants of the Sun’, dashing male lead Song Joong Ki recently appeared in a scene when he was seen consuming a red ginseng tonic, produced by the Korea Ginseng Corp (KGC). Following his appearance, KGC is now optimistically expecting that the sales of its red ginseng extract and other products will increase in multi-folds in the domestic and international markets. It is also revealed that Song and the rest of the cast will be seen consuming the red ginseng products throughout the drama.

A KGC spokesman said, “We expect the popular TV drama will spark interests in red ginseng and its health-boosting effects.” He added, “Hongsam Jeong Everytime, the tube-shaped, easy-to-carry product that contains red ginseng tonic, has been featured in the drama as product placement advertisement. The product is really popular in Korea and its popularity has begun spreading to China.”

The spokesman also reported that there are two noticeable recent trends. There has been an increasing number of Chinese tourists who visit KGC retailers at the major stores, and more Chinese consumers are visiting the company’s website to order Hongsam Jeong Everytime and other related products.

He ended, “With 10 more remaining episodes, ‘Descendants of the Sun’ will attract the growing number of viewers both in Korea and China. We expect Song will be seen with Hongsam Jeong Everytime in upcoming episodes, which will prompt more people to turn their eyes to our red ginseng products.”