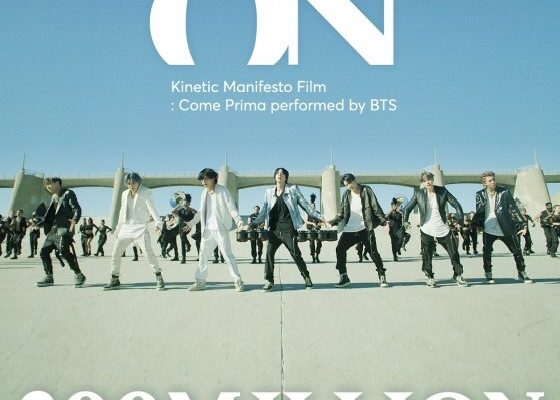 BTS is “on” a roll as the boys have reached yet another milestone!

The title track of its album Map Of The Soul: 7 exceeded 200 million YouTube views on June 21, four months after its release. The video had previously exceed 100 million views in the same week from its release.

BTS’ “ON” is a high octane energy track, which expresses the septet’s message of being passionate about their ambitions and to accept their circumstances as their fate and of moving forward without stopping.

The Kinetic Manifesto Film for “ON” is impressive to say the least. With over 30 dancers and 12 marching bands who took part in this extravagant video, it gave quite the larger than life appeal to it. The video was awe inspiring with its diversity. Instances such as the members playing drums as well as a fiery dance break also stood out in the video.

BTS swept various charts with its album Map Of The Soul: 7. The title song “ON” was placed at fourth in the US Billboard’s singles chart, the Hot 100 chart and Billboard 200 chart. It ranked at No.1 on the UK Top 100 chart. Additionally, it also ranked at No. 19 in the Album Ranking in the first half of Japan’s Oricon Chart.