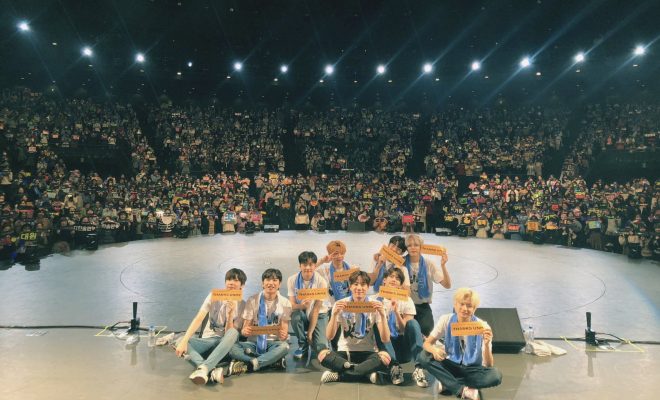 “Today, tomorrow, and always — thank you, thank you. “

Almost a year since they were crowned the top nine on KBS’ Idol Rebooting Project: The Unit. Jun, Euijin, Hojung, Feeldog, Marco, Hansol, Daewon, Kijung, and Chan stood on stage for the last time as UNB at their finale concert series titled UNB Japan Final Concert ~ Thanks UNME ~.

The boys met UNMEs in Osaka on January 25 before wrapping up their concerts in Tokyo on January 27. The concerts also marked their last performances as a boy group after 295 days since debuted on April 7 last year.

In a Twitter post on @official_UN_B, the members thanked all the fans for making January 27 a happy and memorable day. They also relayed their wish for UNMEs to remember that day as a happy day.

UNMEs also expressed their appreciation and gratitude, as well as support and promises, to Jun, Euijin, Hojung, Feeldog, Marco, Hansol, Daewon, Kijung, and Chan through Twitter using the hashtag #ThanksUNB.

Thank you for the memories.

Don’t know what to say…
Really want to deny this is the final concert in Japan…
Thank you for The Unit to let our boys shine again.
Thank you for the memories.
Even though the events and schedule of UNB ends, UNMEs are still here to support you guys. #ThanksUNB #UNB #유앤비 pic.twitter.com/uAjTRMO97l

You’ll always be one of my most precious memories.

You helped me in a difficult moment of my life. You saved me from my dark thoughts. You made me believe in my dreams. You'll always be one of my most precious memories.
Thanks @official_UN_B I hope fate will make us meet again sometime?#ThanksUNB #UNB_JAPAN_FINAL_CONCERT pic.twitter.com/PnOM2GKfqj

I will cherish this memory forever.

"This moment I wanted so desperately
I’ll remember it forever
Just like this, I’ll protect you
Just as beautiful as you are
You’re my only one"#ThanksUNB pic.twitter.com/TAZkJjh5ia

You are the reason why I am here.

Thank you, UNB, for never giving up on your dreams and for the chance to love and support you.

thank you unb,
for never giving up on your dreams and for the chance to love and support you#ThanksUNB #GoodbyeUNB pic.twitter.com/9VVXwmfLQB

UNB will always in our heart forever… ❤❤❤

Thank you for bringing laughter and happiness in my life.

To UNB, thank you for bringing laughter & happiness in my life. I will cherish those times ? Pls make sure to take care of yourselves & get some good rest. Looking foward to the next journey?❤️Thank you UNB#ThanksUNB #GoodByeUNB#UNB_JAPAN_FINAL_CONCERT pic.twitter.com/fIojgPM1MW

Thank you for coming into my life.

I really love you guys so much! Thank you for coming to my life! Please always walk on the flowery path!!! Gonna miss you ot9 @official_UN_B ㅠㅠㅠ ??? #고맙고_고마워 #ThanksUNB #UNB_JAPAN_FINAL_CONCERT pic.twitter.com/4aMKtq7B7m

They brought happiness and hope to countless people.

[1] UNB started as nine boys from different paths of life working together towards one goal. They met many friends along the journey and created meaningful bonds. As UNB, they brought happiness and hope to countless people.
#ThanksUNB #GoodByeUNB #UNB_JAPAN_FINAL_CONCERT #UNB pic.twitter.com/5a6Ww3shDO

You have worked so hard. We are so proud of you.

#ThanksUNB for…
your awesome music
your cool performances
your laughters and tears.#고맙고_고마워@official_UN_B You all have worked so hard. We're so proud of you!

Our time together maybe was short, but it was a wonderful one.
It will become our precious memories…You&Me. pic.twitter.com/z2PZovI8yw

Till we meet again.

I don't want to say goodbye.. I won't say it.. This is not the end for us.. UNME always here.. Waiting.. Cheering..and Loving them as they walk on their own paths..and bloom into successful star✨?UNB live forever in our heart.. #ThanksUNB
Let's say 'till we meet again..' pic.twitter.com/fEm5Y5e5db

A million times, thank you.

This is hard. But then maybe, the most beautiful stories, they never really end. You carry them with you. Somewhere, where there's no touching them, where it's always dawn—–

To Jun, Euijin, Hojung, Feeldog, Marco, Hansol, Daewon, Kijung, Chan, and UNMEs, congratulations and thank you for the precious memories of the past nine months. You’ve worked hard.

Look back on those wonderful time together here.