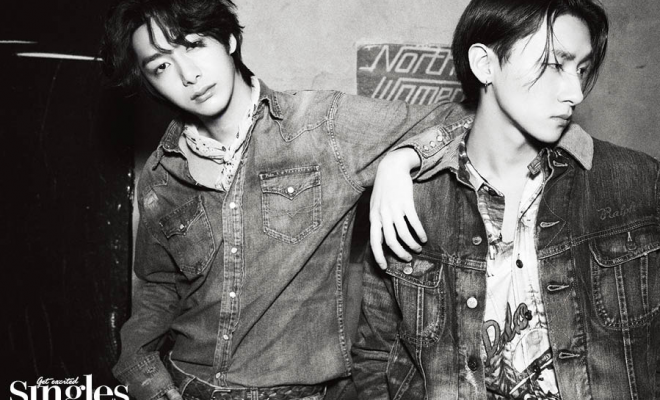 MONSTA X’s Hyungwon and I.M went back to the 90s in their latest interview for Singles.

MONSTA X members Hyungwon and I.M flaunted their outstanding visuals in their photo shoot for Singles’ November issue. The magazine also held an interview with the two artists, in which they shared about their unique personalities and talked about their upcoming album. 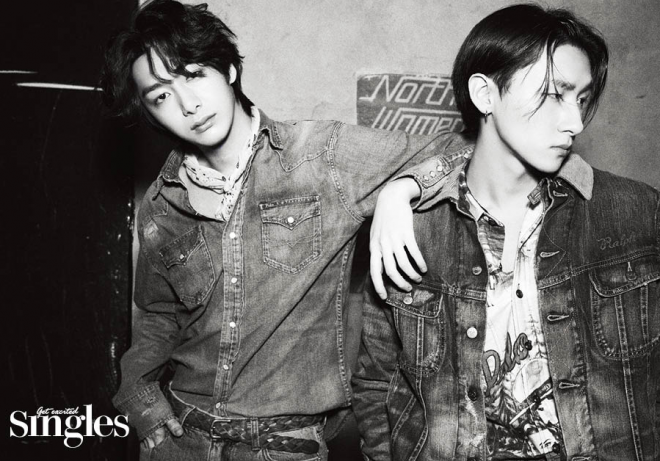 The Analog man and DJ, Hyungwon

Aside from his striking visuals, Hyungwon has a lot of other aspects that he shows to the public. One of them is his second persona as the impressive DJ “H.ONE”. The artist shared his journey and love for this type of activity, through which he found another way of getting close to the audience.

“I think it’s been about three years since I started DJing,” the idol began. “I happened to meet a DJ and learn from them. It has a different charm from a singer’s because of the wider access of music. Since it was fun, I started thinking it would be good to continue it steadily.”

He also shared about the overwhelming excitement he gets from it. “I can’t forget the feeling of breathing with the audience when performing. I keep DJing, because I want to continue feeling that way. It makes me feel alive when everyone in the concert hall is jumping and dancing together as one.”

The performer continued by revealing his love for analog things, and stating that “A film camera is a great item to satisfy that analog sensitivity.” Unfortunately, the idol hasn’t been able to take pictures of the scenery theses days, but he has been trying to work through it in another way. “Recently, I can’t take pictures of  the scenery because I can’t go outside. I try to appease my desire to take photos by focusing on the members beside me.”

Hyungwon also shared about choreography centered on hand gestures. “There are quite a few outfits that show my wrists when raising my arm.” Due to his white skin and long fingers, some moves can be more delicate and sexy.

“It is pretty when you don’t intend it. If you do such a move on purpose, you don’t look sexy.” According to him, paying attention to those parts stiffen the body and the desired outcome is lost.

Lastly, Hyungwon admitted that he thinks there isn’t a better gift for his fans than the music he composed through DJing. “One of the reasons I exist is the fans.” 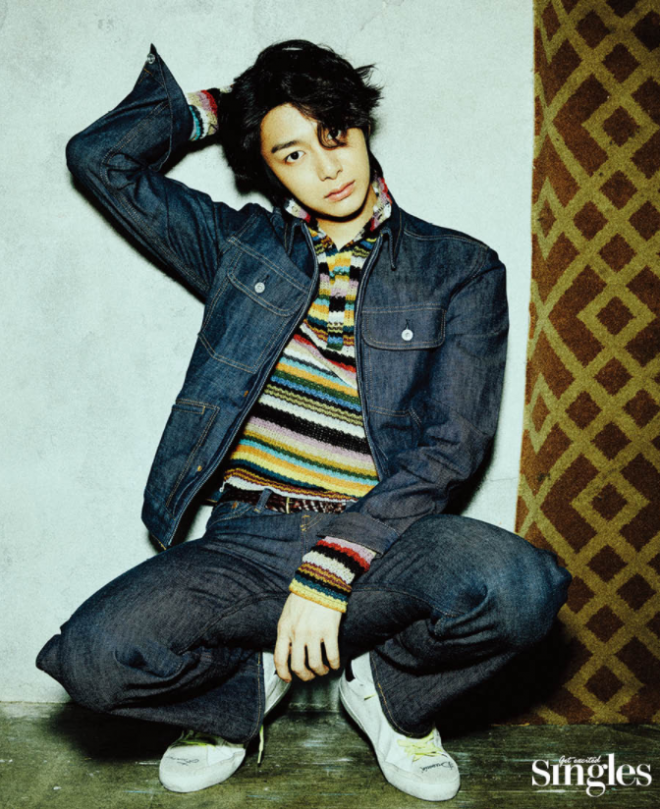 One of the outstanding rappers in Monsta X, I.M talked about his unique character and his plans for the future. He even opened up by sharing some heart-warming thoughts.

The youngest member I.M has a straightforward personality and always points out what he thinks. “Conflicts of opinion are fully reconcilable but I can’t stand it when it comes to being wrong, unjust, or disadvantaged.”

As he himself admitted, fans are well aware of this personality. The idol’s behavior is also often compared to that of a cat. “I don’t know which part of me is like a cat, but I think it is a very attractive animal.”

I.M also talked about his favorite book, titled The Giving Tree. The story is about the relationship between a young boy and a tree, and of their time spend together.

When the boy became an old man, he returned to the tree only to find it cut off, with only the stump left. The elder uses the cut section, where the tree rings are visible, as a chair to relax on.

“The story touched my heart,” admitted the rapper. “A love that gives everything away. I wish I could be that kind of person to someone. Also, I wish to have someone like the tree.”

The artist then talked about his solo plans. “For Monsta X albums, the ideal is to make sure at least one self-composed song is included. I’m currently planning to release a solo album, but the format of it is still unclear.”

He continued by saying that minor genres will probably dominate. “It is not bright music, but rather subtle and dreamy. In terms of color, it will be purple.”

Lastly, I.M revealed a fun fact about a nickname he has. “Banpo 4-dong bomber. It means bombing the hearts of older women.” The idol stated how he felt his presence becoming clear because he certainly felt the impact. 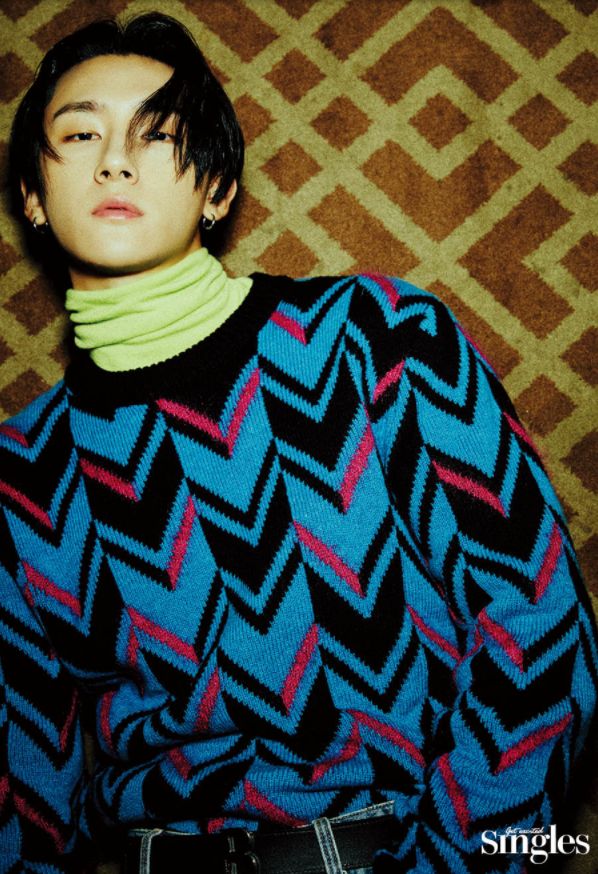 Hyungwon and I.M presented a fresh combination for the Singles pictorial. I.M stated, “Except for the concert unit stage , it’s the first time shooting a pictorial together. Surprisingly, Hyungwon and I have quite a lot in common.”

To that Hyungwon further added, “We’re both from Gwangju, our birthdays are in January and we both have a little bit of a dark side.” With a laughter, he added, “Since we are both not very active, we tend to be quiet.”

To the question if they are boys or young men, the two gave their own opinions, starting with the older, Hyungwon. “Seeing I worry about the future, I think I’m a young man. The boy has more dreams and hopes rather than worries. Perhaps because I’ve grown up, I feel more weight than a boy, I’m a young man with worries and troubles.”

In comparison, I.M said, “If that is how Hyungwon defines the boy and the young men, then I think I’ve been fifty-fifty since I was young. I was a little afraid of becoming an adult.”

The rapper explained how with growing up, there were more things to worry about. He admitted to having mixed expectations about what would happen when he grew up. The artist then pointed out, “Of course, I am still anxious now. You can’t survive unless you are anxious. So I think I’m on the borderline between a boy and a young man.”

The interview moved on to the 1990s culture that recently became a genre of trends and came to life under the hip theme of “Newtro” The two idols were asked if they could find the “Newtro” part in them.

Hyungwon started by admitting that he doesn’t know how to use the many convenient new machines that keep coming out. The artist picked an analog way of life. “I prefer cord earphones, rather than Bluetooth ones. I like old-fashioned film photography and vintage items.”

In addition, I’M began by saying, “I don’t know about stuff, but if we talk about pizza, I like the most basic pepperoni pizza.” Apparently, the youngest does not seem to be attracted by the variety of up-to-date toppings.

He then finished with, “Isn’t the basis the final product of our ancestors’ many experiences of failure? The most basic thing is the most stylish and trendy.”

Then they were asked about what type of song or album would be created if Hyungwon and I.M formed a unit. On this they both agreed on the concept by saying, “Sexy, elegant and extremely high-quality music is likely to be born.”

They continued with their thoughts, “The music tempo should be a little slow and drowsy.” When trying to compare it to something relatable, they mentioned the artist Two Feet, who has a dreamy and sexy tone of voice.

The performers’ final combined question was about their third full-length album Fatal Love, which is about to come out on November 2. “We prepared for a long time and we think we will be able to show a lot of good music.”

If the previous music of Monsta X was mainly intense, this time it will be like a subtle yet impactful feeling of controlling the sexiness and intensity of moderation.

Hyungwon and I.M finished off by saying, “As usual, it’s different. Please give us a lot of support.”

The full pictorial and interview of Monsta X’s Hyungwon and I.M is available in Singles’ November issue.