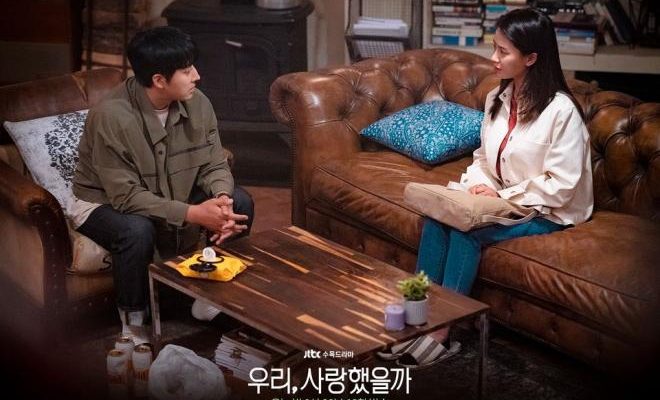 Apart from captured beautiful lines, the recent episodes of Was it Love begins to unfasten the knot about Noh Ae Jeong and Oh Dae Oh’s breakup 14 years ago.

Finally! Leaning to the final weeks of Was it Love, the romance-centered conflict is in full swing. While episode 8 show Dae Oh (Son Ho Joon) keen to start over again with Ae Jeong (Song Ji Hyo), their present lives are still tied up to unanswered questions relating to the cause of their breakup and Ae Jeong’s disappearance.

Ae Jeong’s love predicament is probably one that most girls would volunteer to help her out with.  So, let’s hope she makes a sound decision soon.

Who else like us had already set up a counting board to monitor the scores of the boys vying for Ae Jeong’s heart?

Finally disregarding brotherhood, Ryu Jin (Song Jong Ho) braves the odds to fight for his “one that got away”. Admitting to his best friend, that he also likes Ae Jeong. “What am I going to do? I am already in to deep?,” he said.

A memory of Ryu Jin’s secret love confession was also unveiled when Dae Oh asked his hyung to help with his courting plan for Ae Jeong. For a moment, he forgot the favor asked by Dae Oh, and told Ae Jeong all the bottled up emotions he wanted to say. When his rationality came back, he made an excuse that it was what Dae Oh wished to say – wasting the chance to say what his heart truly feels.

“I like you. At first I found you fun. Then, I found you beautiful. Now, I miss you even when you’re in front of me.” – Ryu Jin

Determined to take his love chance, he finds himself in a remote island, with the rest of the boys adoring Ae Jeong. But Oh Dae Oh adorably thwarts his love confession plan.

It can’t be helped to be partially biased on supporting Yeon Woo (Koo Ja Sung) for his unrequited love for Ae Jeong. Especially when he is willing to stay, even if his love is far from being reciprocated.

Offering a cup of hot choco, Ae Jeong thanked him for everything he has done. She tells how she feels bad not being able to do anything for him. That heartbreaking scene particularly cuts on Yeon Woo’s heart, since his life dream can only be given by her.

It turned out that Ae Jeong looks like the woman CEO Koo failed to protect in his past. Hence, he does not want to go through the same mistake again. His son Dong Chan, who has been craving for motherly love, stumbles on the photo bearing his mother’s face – who looks like Ha Nee’s mom.

In episode 10, it is also hinted that Dong Chan is not CEO Koo’s birth son. The CEO also mulls over revealing the truth about Dong Chan’s mother’s passing.

Episode 9 of Was it Love shows Noh Ae Jeong unrelenting to her ex-lover’s plead to get back together. Remarking a heartbreaking choice that she had to make, she asked Dae Oh to leave her be.

We also saw from her perspective the hurt she received when her boyfriend starts going cold after his passionate parade of affection. A faint picture of witnessing Dae Oh kissing a woman gives away the starting point of her trust breaking.

“We can’t go back to 14 years ago. It’s true my heart fluttered for a while. I may have been a little excited. But that is nowhere enough to fix everything that happened in the past 14 years. I could die or leave you. Those were the only choices I had 14 years ago. In the end, I left you because I couldn’t die.” – Noh Ae Jeong

Just like his old self, who did everything for Ae Jeong, to accept him in her heart. Oh Dae Oh wants to stake his all knowing something happened 14 years ago that he does not know about.

“Everything that I have told you has been from the bottom of my heart. So, give me one more chance. I don’t care about the pain I’ve felt. I’ll do whatever I can to help you get over your broken heart. – Oh Dae Oh

The Truth About 14 Years Ago

Just as Ae Jeong mustered courage to have a serious talk with Dae Oh, their conversation leads to another roll of misunderstanding. A case that has been annoyingly propelling the narrative of the series.

“I guess that sums up our relationship. It was a misunderstanding. But, why has it caused me a great deal of pain and suffering?” – Noh Ae Jeong

Both Dae Oh and Ae Jeong’s thoughts seem too coward to ask the direct questions. That leads to further layers of vagueness. If only, they have Ha Nee’s train of thoughts in narrowing down how they both refused to ask the right questions that led to their relationship fall out.

“I don’t know how many knots there are, but let’s start untying them one by one.” – Oh Dae Oh

Plagued by misunderstanding, one of the two important questions in Was it Love has also been raised. Who is Ha Nee’s father? Ryu Jin thinking his agency’s CEO would harm Ae Jeong and Ha Nee rush to her home.

Ae Jeong’s mom, who learns from Ha Nee about her birth father, rages to throw garbage at Ryu Jin. Realizing her mom’s misconception, she tells her to stop and declares that Ryu Jin is not Ha Nee’s father.

Just then Dae Oh, who has also pondered about Ha Nee’s problem, appeared to confront Ae Jeong if he is her daughter’s father. Find out the answer to Oh Dae Oh’s question in the next episodes of Was it Love!

The series airs on jTBC every Wednesday and Thursday and is streamed on Netflix as well.