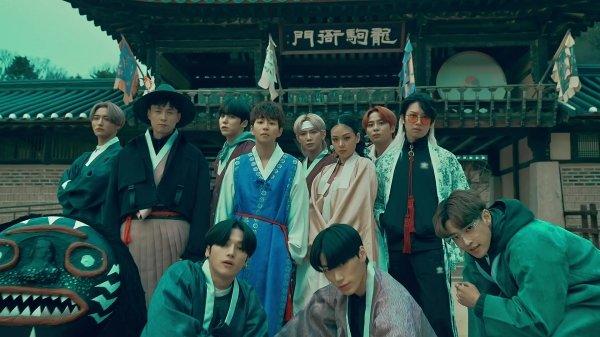 Before their appearance in the music video, Min Kyunghoon admitted, “I’m a total fan of ATEEZ” while watching their videos, summoning intrigue from Knowing Bros fans.

Meanwhile, during filming, ATEEZ impressed with their charismatic presence on set. Additionally, the group choreographed their scenes for the music video, drawing respect for their professional skills even with their short screen time. The boys also stunned with their quick understanding of the direction of the video director, Super Junior’s Shindong.

Subsequently, Shindong and Min Kyunghoon complimented the group, stating “ATEEZ was so good”, and that the music video “looks good thanks to our handsome brothers”. During a freestyle dance scene, members Yunho and San summoned excitement from staff, boasting spontaneous moves that matched the vibe and color of “Hanryang”.

Meanwhile, fans can watch the full scenes of the music video’s filming and production on JTBC’s Knowing Bros YouTube channel.