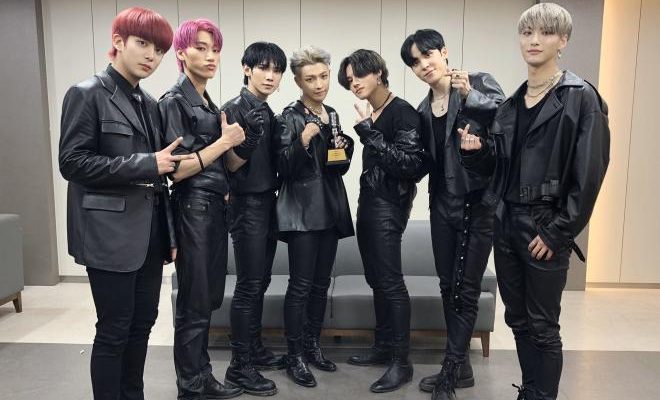 ATEEZ, “the superstar of the next generation of superstars”, won during the Immortal Songs special for soloist Rain, making them the first and only fourth-generation group to win the iconic show twice!

ATEEZ won their second crown during the Immortal Songs episode, honoring the stages of the soloist, Rain. This makes them the first and only fourth-generation group to win the legendary show twice. The members performed Rain’s 2004 track titled, “It’s Raining”. ATEEZ faced other artists such as Jo Kwon, Lee Changmin, Jamie, N.Flying’s Yoo Hweseung, and Kim Youngheum.

During the show, ATEEZ stated, “It is an honor to cover the performance of a respected senior. We will show you our own colors”. Promising to display their unique charisma, ATEEZ definitely did just that.

The members displayed lethal power, wearing all black leather outfits. During the performance, they delivered their unmatched dancing throughout the performance, proving their reputation as stage icons. Furthermore, leader Hongjoong impressed with a bold rap verse while maknae Jongho captivated attention for his immense vocal strength.

Additionally, the dance break decorated with various laser beam lights hooked audiences into the performance even more. As ATEEZ showed an admirable dance segment featuring chairs, and San even using it to hoist himself mid-air, the group received a standing ovation from judges.

The original artist, Rain, stated “Looking at ATEEZ, I think they will be the superstar of the next generation of superstars. There seems to be no limit to K-Pop anymore.”

Moreover, fellow competitor Jo Kwon added, “Each person has a distinct color, and the viewers feel the passion, so the stage comes to me more sincerely”.

Upon winning the episode, the group stated, “I was grateful for the whole stage in front of Rain, and it’s an honour to be here”. Meanwhile, ATEEZ will make their comeback on March 1 at 6 PM KST.