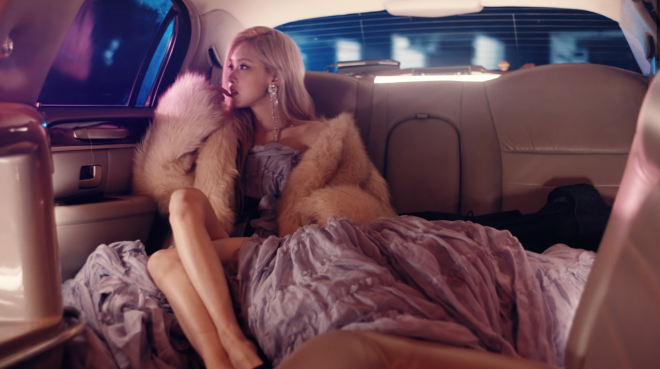 BLACKPINK’s Rosé is a radiant vision in the newly released music video teaser for “On The Ground”.

BLACKPINK’s Rosé excites fans for her upcoming solo project with a new teaser video. The 15-second clip for “On The Ground”, intrigued fans with a closer look at the upcoming release. In particular, the video hinted at the track’s melody and the music video concept.

During the clip, Rosé displayed elegant styling in a luxurious purple gown, long earrings, and a fur throw as she sat in a car. Despite her opulent appearance, the artist captivated fans with her sentimental gaze, looking outside the car window. Appearing deep in thought, Rosé evoked feelings of loneliness and contemplation. The clip’s fragmented, slow-motion editing created a distorted feeling for the viewer as well.

Furthermore, the end of the video revealed an exclusive listen to the song’s melody. Featuring acoustic guitar, Rosé sings the words “on the ground” almost yearningly. The short but sweet listen excited fans for the upcoming track and raised curiosity regarding the song’s message.

Fans can purchase the artist’s upcoming project in three different formats, including a CD, LP, and KiT version, which went on pre-sale beginning March 4.

The cinematic and sensible mood of the teaser indicates a lovely release to come. Rosé herself participated in the design and conceptual creation of the project, resulting in high expectations. Meanwhile, Rosé’s first solo single album titled, R, will release at 2 PM KST on March 12.