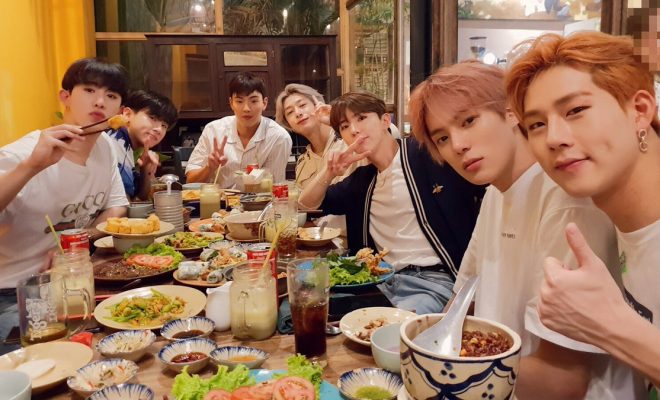 Known for rough and sleek tracks, MONSTA X can also charm you in fluffy and endearing ways with their soft tunes.

It’s no joke that MONSTA X has become one of the most famous K-pop groups. They’re called a global phenomenon for a reason. But aside from the songs they produced and released as a group, they also have underrated content that displays their own personal, musical color.

Today we will take a sweet road trip to MONSTA X’s saccharine tunes.

Who would’ve thought that MONSTA X’s charismatic rapper could sing this good? His short cover of “Instagram” will surely make all his fans melt and we might have already listened to this repeatedly to help us go to sleep. He showed that he is not always the charming maknae we always swoon over on stage, he can also sit down and sing some heavenly tunes.

MONSTA X’s sunshine puppy just posted this on August 3 and we want him to have his own solo OST track now. Just listen to how he mixed his own voice to blend with his own swoon. Repeat after us when we say that he deserves more lines.

3. Kihyun and I.M’s cover of Tako and J Hyung’s “You’re Pretty the Way You Are”

We nearly squealed for three minutes watching this special video that featured the cuteness of MONSTA X’s main vocal and rapper maknae. Excuse us as we faint every time I.M winks at the camera.

Kihyun and Jooheon shared their vocal talents to contribute to the soundtrack of MBC’s amazing crime drama this year. Listen to the track below and marvel on Kihyun’s godly vocals!

Our charming leader not only has the body women swoon over, he also has this sweet, melodic voice that is typically skimmed over because of his looks. Listen to his solo OST from Protect the Boss.

6. “One More Step” from She Was Pretty

Can we already say that Kihyun is an OST king? Adding to his long rap sheet of OST contributions is this sweet ballad used in the hilariously romantic scenes of She Was Pretty. Melt over his voice below.

Only true Monbebes know that MONSTA X made a cameo on the Chinese drama, Hello, Mr. Right, but did you know that they sang one of their OSTs too? Check it out below!

2Chain, no not the rapper, but the duo rapper-vocals from MONSTA X, gifted us with this groovy track. Who would have thought that the vocalist can be a rapper and that the rapper can be a vocalist? Watch them prove their limitless talents below.

It’s no doubt that Wonho is a great composer, proving it with “From Zero”, a track from MONSTA X’s The Code album. The sound and groove of “Neol Hada (널 하다)”, made for their own special unit stage, showed how talented he really is.

Hyungwon is not just MONSTA X’s visual model, he’s also a very talented DJ. He has performed for Ultra Korea, Seoul’s biggest music festival, for two consecutive years since 2017. “Bam Bam Bam” features DJ Justin Oh and his co-member Jooheon while “My Name” is a recently released collaboration with famous DJ, Jimmy Clash, featuring Talksick. You can stream both tracks on Spotify.

Yes, we all know about I.M’s recent mixtape, “Fly With Me” but it seemed that his first one didn’t get much love and attention. Listen to his first ever mixtape, featuring YESEO, below.

This iconic track, though not really that soft, featured the struggles and the realness of being a person who wants to achieve their dreams. Jooheon clearly embodies the hardworking talent that’s deserving to look up to these days. Collaborating with FLOWSIK, this song was made famous on a rap variety show. Check out his impressive bars below.