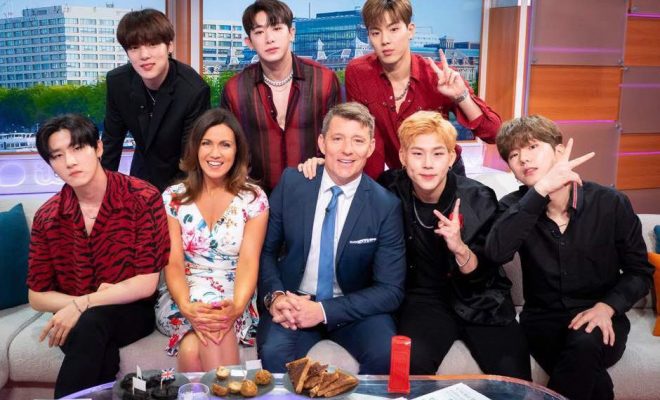 For once, waking up early on a weekday morning became enjoyable – thanks to MONSTA X!

On July 11, MONSTA X made their sweet landing on Good Morning Britain as the first-ever K-Pop artists to ever grace the popular morning news program as guests. With such a great milestone to their career, we picked out the moments from the show that we – and probably Monbebes too – enjoyed from the episode. 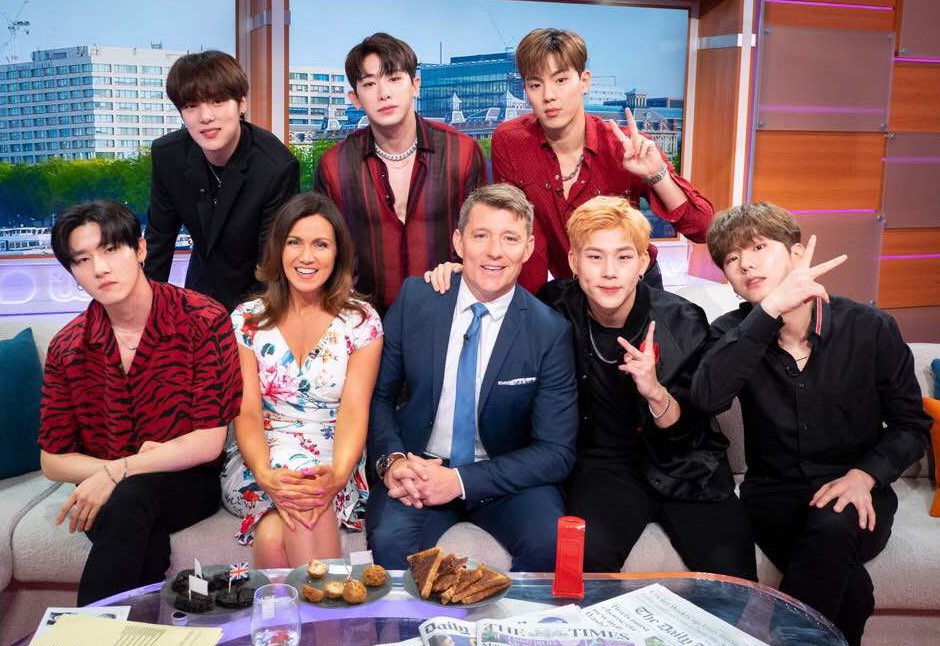 A space for Hyungwon

After finishing their round of introduction, the boys quipped that there are actually seven members from the group. However, one of them (Hyungwon, as earlier announced by Starship Entertainment) couldn’t make it because he was sick – or as they put it, he “had too much snacks”.

Despite this, the group’s love for Hyungwon still shone with how they even left a space for him on the couch. This sweet gesture towards their sick member even caught the attention of the show’s hosts – all while making the hearts of fans viewing the program melt!

they left a spot for Hyungwon 🙁
they did great even as 6 so proud of them as always @OfficialMonstaX #GMB_MONSTAX #GoodMorningBritain pic.twitter.com/o4mlEekxOD

“We are all equal”

During the interview, the boys were asked who the heartthrob in the group is, especially since they are beginning to establish their name as a rising boy band in the international scene. As if reading the minds of Monbebes, I.M answered that they are all equal in the eyes of Monbebes.

Additionally, the group was asked who the cheekiest member is. Without hesitation, everyone pointed out to Joohoney – an answer so obvious to Monbebes that the rapper himself accepted. “Emphasis on cheeky,” he cutely said, even adding a show of his dimples to boot.

jooheon saying "yes, i'm cheeky" changkyun calling shownu big daddy in a british accent, and kihyun saying that him and shownu are the parents of the group ??? pic.twitter.com/DR1IJXrbGv

Though Monbebes are not sure what kind of “daddy” was meant upon the hosts delivering the question, the MONSTA X members quickly pointed to Shownu.

They even referred to him as “big daddy”, and of course they were pertaining to how the leader is like a father when it comes to taking care of his younger members. Of course, the MONSTA X family isn’t complete without a mother – which I.M proudly pointed to Kihyun as the one who takes the role. Kihyun agreeing and saying “We are parents,” had us cooing in adoration, everyone.

when asked who the cheeky one and who the daddy is in the group:

After naming fish and chip as their favourite food in the UK, the group tried out several British delicacies including blood – we mean, black – pudding and Scotch eggs. They also tried out Marmite on toast, but their reaction was so great that we had to write it down separately!

As British Monbebes may know, marmite is a spread that often perplexes one’s taste buds. “You either love it or hate it,” the show’s hosts even said themselves. Being the foodies themselves, the seven boys gamely tried out the treat – and their faces made their opinions extremely loud and obvious!

Though the face Kihyun made upon trying out the “very salty” snack is priceless, Joohoney’s reaction to it has kept us laughing since the show was aired.

… in contrast to Minhyuk!

While Joohoney looked like he wanted to chop his tongue off to get rid of the taste, Minhyuk seemed to be enjoyably eating the marmite with the toast behind him.

britain’s opinion on marmite summarized in a 2-second video. the first half is saying “it’s my style” and the other is wincing in plain disgust pic.twitter.com/jE241QzUWk

We don’t think we’ll ever get tired of hearing MONSTA X explain what “Monbebe” actually means. Monbebes love you too, MONSTA X!

Changkyun: Mon means mine in french so it could be like my lover my..
Kihyun: Darling
Changkyun: My mate My darling
Minhyuk: Baby
Changkyun: My soulmate
MC: 'Cause you love your fans
MX: Yes

And we love you. Love you so much to the universe & beyond❤? pic.twitter.com/9zlN83a8jG

The boys were very overwhelmed by the love and support fans in London gave them for their visit – and they made sure to express it! “This time, it was beyond our expectations,” they said.

Shout-out to Gucci and Yoshi

Our hearts melted when proud owner Joohoney expressed his love for Gucci and Yoshi – his dear cats. Upon being asked what they missed the most in Korea, the MONSTA X rapper quickly provided his pets as his answer.

no one:
absolutely no one:
not even a single soul:
jooheon: ? i miss yoshi & gucci ?pic.twitter.com/beJaPIY5s6

Check out the full clip of MONSTA X’s guest appearance on Good Morning Britain below: