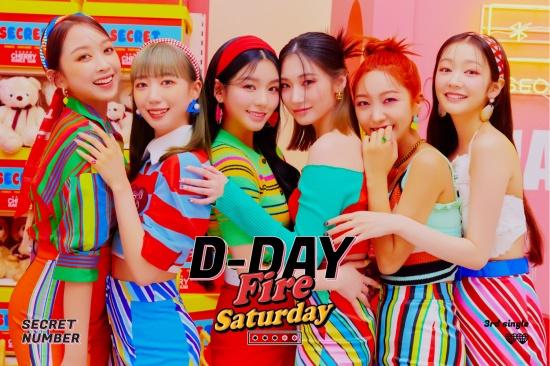 SECRET NUMBER will release their third single album, Fire Saturday, on October 27 at 6 PM KST. This marks the group’s first comeback in 11 months since their last single, “Got That Boom”, released last November. Making their return to the music scene even more exciting is the addition of two new team members, Zuu and Minji.

Fire Saturday includes the title track of the same name, in addition to the b-side “Dangerous In Love.” The title, “Fire Saturday” will feature an addictive melody with heavy synth bass to deliver a retro-inspired track. The song will highlight the members’ vocal strengths and harmonization skills.

Meanwhile, the members will also deliver a retro festival in the upcoming music video. Dressed in colorful vintage-inspired looks, SECRET NUMBER will showcase their synergy and youthful energy.

The b-side, “Dangerous In Love” was penned by member Jinny. Jinny previously contributed lyrics to the group’s hit song, “Got That Boom”. This b-side will show contrasting charms to “Fire Saturday.”

Ever since their debut in May 2020, SECRET NUMBER quickly rose to the forefront of K-Pop fans’ attention as one of the emerging super rookies. As a result, the group earned a spot amongst Spotify’s “2020 Top 5 Most Streamed RADAR Korea Artists” as well as scoring the “Best Female Rookie of the Year Award” at the 2020 Asia Artist Awards.

Moreover, the group caught global attention and received praise from various worldwide publications, including Billboard. Many anticipate their rising popularity with their new music, in addition to the charisma the group will show as six members.
SECRET NUMBER will release their single album Fire Saturday at 6 PM KST on October 27 through various music sites.